Book: a man and two women on a journey to fulfil some sort of prophecy about the end of the world

This is an older fantasy book I read 10-15 years ago-ish. My recollections of it are vague, but I recall it had a medieval-ish setting, and was told from the point of view of a man who is joined on a journey by two women; of the two women, one is beautiful, possibly a nobility, while the other is supposedly short and unattractive, and is the first one's handmaid (at least in name, although their true relationship is more complicated). Very importantly, the man realizes over time that the beautiful woman is a simpleton and is entirely dependent on her very clever and self-sufficient, if ugly, handmaiden.

Furthermore, the man is I think perhaps some kind of priest, and finds some object which is important in the prophecy about the end of the world, and which is connected to one (or both) of the women. The man ends up falling in love with the clever woman, and it turns out that she is some kind of goddess I think, and is connected to the prophecy. The three meet up shortly after the man begins traveling, and gain each other's trust, eventually journeying throughout the land/kingdoms while evading troops, and various enemies I don't recall very much about. They end up going to some station/island/city which I think is by the sea, and is related to a storm which ends the world, or is its rebirth according to the prophecy (again, to stress, this is all very hazy to me, these details could be off).

Also, I seem to recall there perhaps exists some kind of magic in the world - but if it is, I don't recall it being a huge part of the story, or at least it is not a common occurrence - again, I don't really remember.

If it helps, I have a feeling that the author might have been a woman.

A long shot but it may be the_ Winter King's War_ trilogy: 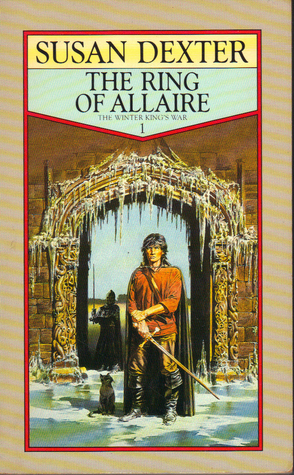 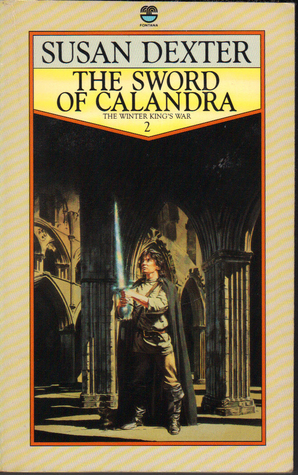 The Ring of Allaire, The Sword of Callandra, The Mountains of Channadran

The series has the hero, a magician's apprentice, face an enemy who's favourite tactic is to bury people/lands under storms of snow and ice. Since success would create a new king, many nobles don't want him to complete the prophecy and so he has to dodge their armies as he tries to fulfil all the tasks necessary to free the land.

He is joined on his quest by a plain woman and and seeks a beautiful princess, falling in love with the highly intelligent plain woman, only to discover the two women were under an enchantment and his new love was the princess, the other her handmaiden.

The princess has nine rings and is missing the last, ring required by prophecy. The hero Tristan discovers the ring and offers it to her, breaking the enchantment hiding who she is.

In the third book the of trilogy, they travel to a city by the sea on their quest to fight the enemy and break the storms wracking the kingdom.

There is magic, but almost all the magician has been killed during the conflict. The hero performs some magic, but lacks confidence, often perceives the spells to have failed, and therefore relies on more normal methods.

The author is a woman - Susan Dexter. She's just published a re-edited version to Amazon.

This may be The Twelve Houses series by Sharon Shinn. Your memories may be from the book Mystic and Rider, published in 2005. The main male character in this story is Tayse, a King’s Rider. He travels with and eventually falls in love with Senneth, a powerful mystic. She is a very strong, independent woman who works for the king. The second woman may be the king's daughter;

"Princess Amalie is the daughter of King Baryn and his late wife. She shows an astonishing amount of calm and lack of fear. She is rather naïve..." 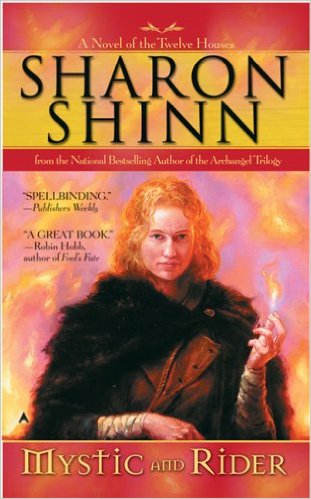 Not the answer you're looking for? Browse other questions tagged story-identification novel medieval or ask your own question.

16
Book about a world of women where a man crash lands trying to find his way home?
3
A fantasy book about a woman who can speak with animals and is taken by the prince?
6
Book about a man who crashes on a planet and saves the princess with a magical weapon
6
90s? novel about an ordinary man pulled into a world of magic
5
A story (novel?) about a man becoming trapped in a “fairy world”/Magonia after travelling down a Bermuda triangle type of road
8
Book with man and female AI, possibly in space