How old was Porthos when Scotty killed him?

In Star Trek 2009, we meet Montgomery Scott in exile on Delta Vega. Scotty says his exile happened because he caused Admiral Jonathan Archer's dog Porthos to disappear during a test of an early prototype of Scotty's transwarp transporter.

Can someone connect the timeline elements together, so that we can see how old Porthos was when Scotty killed him?

Is the dog Porthos?

I include this section because I didn't initially believe it could be the same dog, but research proved me wrong.

QUESTION: Forget with it was Admiral Jon Archer (as it obviously was!): is the beagle mentioned Porthos? Has veterinary science advanced so much? (Please say yes!)

So shut me up.

How old would Porthos be?

We don't know exactly when Archer first got Porthos, although we know he's had him from a puppy. "Broken Bow", the first episode of Enterprise, is established as taking place in 2151:

So Porthos has been around at least since April 2151.

Meanwhile, in Star Trek (2009), Spock gives the stardate after taking command of the Enterprise:

[T]he Enterprise BLASTS AWAY -- in the distance, THE ENTIRE PLANET OF VULCAN SWALLOWS INTO ITSELF -- A TERRIFYING, UNIMAGINABLE IMPLOSION -- UNTIL NOTHING IS THERE BUT DARKNESS. Over this, we HEAR:

SPOCK (V.O.): Acting Captain's log. Stardate 2256.42: I have assumed command of the Enterprise

According to Izkata's answer to this question, that stardate corresponds to February 11, 2256.

Later dialogue from Scotty indicated that he made Porthos disappear six months prior:

Starfleet Officer (cont'd): Six months I've been living on nothing but Starfleet Protein Nibs and the promise of a real food delivery!

Scotty: I told my instructor I could not only beam a bird from one planet to an adjacent planet in the same system -- which is no big deal anyway -- but if I were so inclined I could actually do it with a lifeform! So I tested it on Admiral Archer's prize beagle. Which... was a mistake

Six months before the above date puts us around August 2255.

So Porthos was at least 104 years old.

1 The questions are asked and answered in the comments under the blog post. I've tried to permalink to Orci's reply, but may not have succeeded

There's another answer to this — that Archer, as the crazy man that he is demonstrated to be in the early seasons of Enterprise, decided to have him stuffed and just continue to pretend that he's still alive... So, Scotty didn't kill him as he was already dead.

My evidence for this hypothesis (which is mostly a joke...):

It can reasonably be assumed based on our current understanding of science that a dog living 105 years is impossible even with advances in vetinary medicine in the next 150 or so years.

Archer REALLY likes his dog. See the episode A Night in Sickbay. To recap, the plot of this episode basically revolves around Archer thinking that being around the guy caring for his sick dog is more important than a diplomatic mission, the completion of which will remove the significant risk they faced of the ship breaking and stranding them with no expectation of ever being rescued or able to return home. So Archer's dog is evidently more important to him than his ship or his crew. Given that this is a captain's most important duty, this dog must be bloody important to him! This same episode, along with other season 1 and 2 ones, also paints Archer as being just crazy enough to keep a stuffed dog for nearly 100 years.

Finally, in the script the dog being dead is not explicitly mentioned.

Scotty: So, I tested it out on Admiral Archer's prized beagle.

Kirk: Wait, I know that dog. What happened to it?

Scotty: I'll tell you when it reappears. Ahem. I don't know, I do feel guilty about that.

The main caveat is that in the previous sentence, the dog is effectively referred to as a life form. I don't know if canonically a life form can include dead (but taxidermied?) things.

According to the (considered to be canon) IDW comic Star Trek: Ongoing #12, Porthos was eventually recovered by Scotty, alive and well. 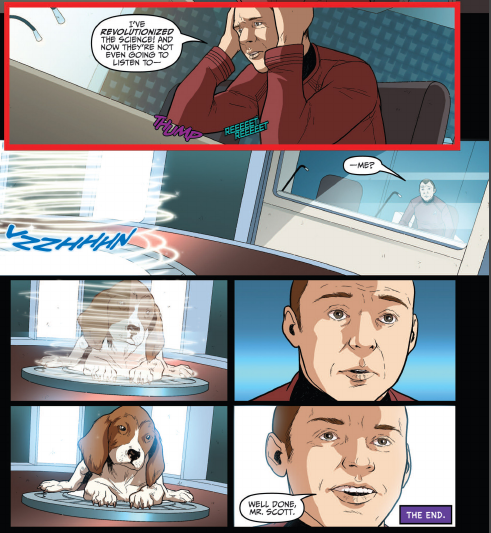 28
Are the events of Enterprise considered canon?
40
How do stardates work?
10
How is longer life span explained in Star Trek?

9
What rank was Kirk when he first boarded the Enterprise in Star Trek (2009)?
16
How could Harrison beam to Qo'noS?
9
In Star Trek (2009) Why won't Nero beam Robau and Pike on board?
10
How is longer life span explained in Star Trek?
5
How and when/where did Jim Kirk learn to code?
7
How far did Scotty beam himself and Kirk?
3
How did Scotty infiltrate USS Vengeance?
2
How old was Pavel Chekov in TOS?
4
Was “Commander MacDuff” killed?
4
How old was Peter Preston when he entered Starfleet Academy?