During the episode we see frequently how the time on the ship seems to go far faster than in Madame De Pompadour's timezone (she's taking "the slow path"), so shouldn't he have realized he'd be back years later by jumping through?

At one point in the episode, there's the following exchange:

ROSE: (asks why they can't use the TARDIS instead of the time windows)

DOCTOR: We can't use the TARDIS. We're part of events now!

It's certainly a poor explanation, but it's one that's used occasionally throughout Doctor Who.

Whilst Doctor Who officially doesn't have canon, this (or a similar) explanation is often employed to justify why he can't simply travel back in time and undo lots of regrettable events. Apparently, this can result in paradoxes, the butterfly effect, and generally bad things. But hey, it's Doctor Who.

Out of universe, this is important because without it the show would be without consequence. Anyone who's hurt/dies/etc can be saved very easily. A variation of this explanation is the notion of time locks, which are placed on several important events including the Time War.

In-universe, this is known sometimes as the Blinovitch Limitation Effect

It is usually understood as having two aspects: firstly, that a time traveller cannot "redo" an act that he has previously committed, and secondly, that a dangerous energy discharge will result if two temporal versions of the same person come into contact. The first aspect is similar to a real-world physics conjecture, the Novikov self-consistency principle.

Some examples of this in the newer revival include in The Big Band (S5E13) where the Doctor brings two sonic screwdrivers into close contact and sparks are emitted which appeared to confirm they were the same sonic screwdriver at different points in time. 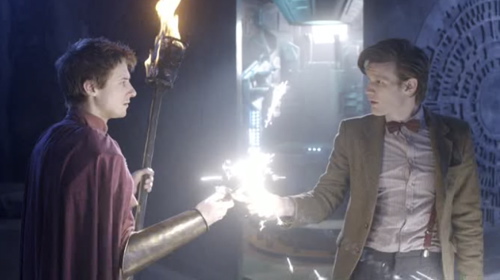 At first, the Doctor thought he wouldn't need the TARDIS in order to bring Madame de Pompadour along, he planned for her to come through the fireplace.

(The fireplace turns, taking the Doctor away.)

(The Doctor calls back through the fireplace.)

REINETTE: More than anything.

DOCTOR: Give me two minutes. Pack a bag.

He goes back through the fireplace to get her, when this happens

LOUIS: You just missed her. She'll be in Paris by six.

LOUIS: Good Lord. She was right. She said you never looked a day older. So many years since I saw you last, but not a day of it on your face.

(King Louis takes a sealed letter from a drawer.)

LOUIS: She spoke of you many times. Often wished you'd visit again.

With this conversation, the Doctor then knew that he never made it back in time, and never took her adventuring with him, so he couldn't go back in the TARDIS to pick her up, because that would create a paradox.

Once The Doctor (and whoever (s)he's with) views or interacts with an event, that is the timeline they're a part of. Were they to go back and change that timeline, that's what causes a paradox. See the events of Father's Day.

So once The Doctor knew that the timeline of Mme. dePompadour did not include any more visits with her, he knew that going back would cause a paradox.

Now, this is one of those things they can get around if they chose to. He could have, for example, gone to visit her, making sure that nobody noticed that she was gone, affecting no other events, and with him making her promise she'd never breathe a word to anyone about the events, including even him.

But obviously the purpose of the tale was to discuss missed changes, and so they went as they did. See also "never being able to go back" to the Ponds in NYC, even thought River clearly goes back many times.

It is inherently difficult for the TARDIS to land at or near complicated temporal discontinuities (such as Madame de Pompadour's fireplace), or "work around" temporal paradoxes.

In "The Girl Who Waited":

In "The Angels Take Manhattan":

The Doctor is ultimately unable to save Clara's life, even with a TARDIS.

There are numerous other examples throughout Doctor Who of temporal irregularities stymying the TARDIS in one way or another. In fact, this is such a common rule that the Doctor's regular companions rarely suggest using the TARDIS as a remedy for temporal issues, even in situations where it might make sense to do so. In "Before the Flood," for example, the use of the TARDIS to deliberately create a causal loop ("bootstrap paradox") is considered sufficiently novel and unusual that the Doctor has to explain the concept to the audience in a cold open, because the show so rarely does such things.

Therefore, we may reasonably conclude that it was unsafe or impossible to land the TARDIS in 18th century France under those circumstances, even though the Doctor never explicitly says as much.

LOUIS: She spoke of you many times. Often wished you'd visit again.

This sentence makes no reference to what his last visit was. The Doctor could have visited 1000 times between the fireplace and her death, he was informed that she wanted 1001. Both before and after the letter was written (so long as the same thing was written) he could Tardis his way back and spend the rest of her life traveling (thus explaining her youthful demise).

Side note: she spoke of you MANY times. Yes she may have raised the same events 1000 times but given the nature of The Doctor I would have expected other adventures. Her experiences on these adventures would also explain her noteworthy success in her own time, though rummaging through The Doctor's mind probably didn't hurt either. (Another testosterone-wash courtesy of The Doctor:P)

10
How did the Doctor join the others outside the TARDIS without opening its door?
4
Why doesn't the doctor fix the chameleon circuit of the Tardis?
4
Why didn't Time Lords return in the end of The Time of The Doctor?
3
Why didn't Ms Delphox use Teller to melt the guilty brain of The Doctor?
5
Of all the humans the repair droids could have chosen, why Madame de Pompadour?
5
Can Madame Vastra use her tongue like some other Silurians?
3
Why was the 11th Doctor flying the 10th’s TARDIS?
12
Why did the TARDIS take them to the Doctor's childhood and why didn't she want the Doctor to know where they were?
12
Why doesn't the Doctor summon the TARDIS more?