How is longer life span explained in Star Trek?

Characters in the star trek future live a lot longer than people live today. For example, Jonathan Archer is still working at age 140 in the 2250s when Star Trek 2009 was set.

How is the increase in life span explained in the Star Trek universe?

Note that simply eliminating Cancer, heart disease, diabetes, etc would not cause such long lives. .. People age because the tips of the DNA molecules (called telomeres) in every cell in the body get "trimmed" (for lack of a better word) every time cells replicate. All the cells in the human body get replaced every 7 years, and some cells get replaced every few days. So the continual replacement of cells at first destroys the telemeres and then continually destroys the genetic information at the ends of the DNA molecules until the cells can no longer make viable copies of themselves so that the person ages and dies.

Factors like telomere degradation and oxidative stress would cause people to die even if every current disease was prevented.

Star Trek hired lots of scientific consultants to make their explanations plausible. What scientific explanations were given for overcoming the non-disease causes of short life span, like telomere degradation and oxidative stress?

I am hoping that this will get answered by someone who knows something about science so that the answer can do justice to the consulting fees that Star Trek no doubt paid to biologists to develop their explanations.

How would the Voyager EMH, Dr. Flox, Dr. Crusher, or the Star Trek 2009 Leonard McCoy explain this to a Star Fleet medical conference? 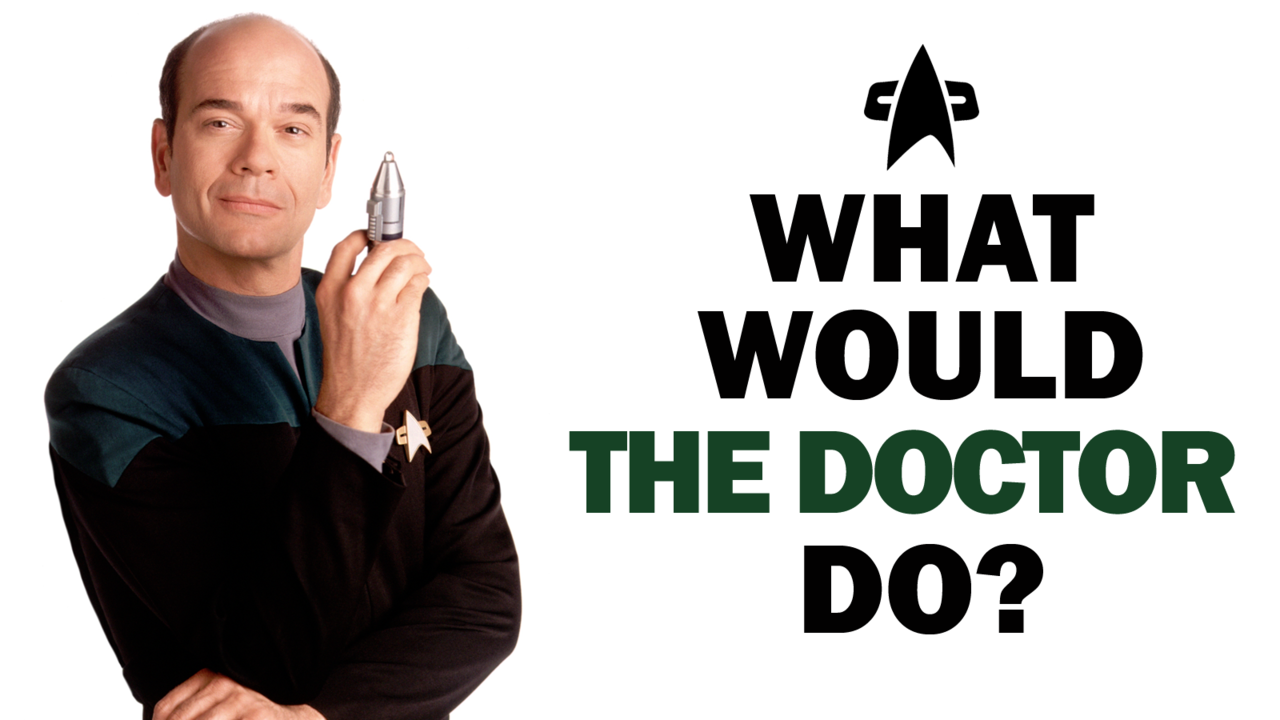 Star Trek writers have been notably shy when it comes to disease and lifespan. When and how certain diseases common to the 20th and 21st centuries were defeated is not told to us, and the reasons for longer lifespans are not mentioned explicitly. However, it is clear that most of the diseases of today have been conquered by the 24th Century.

Regarding longer lifespans, we don't actually have a lot of evidence for this apart from the 137-year-old McCoy and an unsupported claim from Memory Alpha about 120-year lifespans. But for the purpose of the question, let's assume that lifespans are indeed generally much longer than now.

I'll focus on the final version of your question, by appealing to some modern science to conjecture a Star Trek-style reason for the increased longevity.

Let's start by going to go out on a limb and saying that, in many cases, eliminating cancer could be tantamount to life extension in the 24th Century.

Telomere terminal transferase (also called "telomerase") is a ribonucleoprotein that can be used to repair shortened telomeres (whether this was caused by oxidative stress or by normal cell division) and, at least in principle, extend life. It may also increase quality of life by slowing the progression of conditions and diseases associated with tissue degeneration.

However, telomerase application can cause a cell to bypass the so-called Hayflick limit on the number of times it can divide before expiring. Uncontrolled cell division may result, followed by cancer. In fact, there are proposed treatments for cancer that involve vaccinating the patient against his or her own telomerase production, to encourage apoptosis (death) of cancer cells.

There have been numerous studies on these aspects of telomeres and telomerase. Some of these studies are more conclusive than others. For the purpose of answering this question, let us suppose that the ability of telomerase to reverse various aging biomarkers in humans is, by the 24th Century, beyond debate.

The upshot then is that the ability to effectively treat all types of cancer would mean that telomerase could be administered medically in such a way so as to extend both the length and quality of life without risk of inducing terminal illness.

Star Trek medicine is ambiguous enough that we are not shown which preventative treatments and vaccines people receive over the course of their lives. We see emergency medicine almost exclusively in Star Trek. People could very well receive telomerase therapy at intervals, just as we receive vaccines and booster shots.

If I were the EMH speaking at a medical conference, this is how I would explain human longevity in the 24th Century: the defeat of cancer has allowed us to extend cell life using telomerase, without risk of malignancy.

There are only a few cases, which show an extreme lifespan.

One of them is the above mentioned Admiral Archer. The 'out of universe' explanation is: The reference to Archer and his dog in Star Trek (2009) was used for a joke. Being 140 years old can be possible and maybe explainable, but with a 100+ year old dog, it's pretty obvious that the script writers didn't think this through.

The second example i can think of is Dr. Leonard McCoy, who was ~ 137 years when he was aboard the Enterprise-D. This one also can be explained as "plot device": They wanted to have him on the Enterprise-D, but since that would make him almost 140 years old... they just went with it.

I don't think the writers thought of the implications for the human biology. The average life span was increased in order to explain McCoys age, and was probably also a product of simple observation. To quote memory-alpha:

However, at some point in history the average lifespan for Humans was only 35, and by 1999 it had become higher than a millennium earlier.

The average life-span increased rapidly. So the writers continued that. From memory-alpha:

The average life spans during the 22nd century was about one hundred years. This average age was still roughly the same during the 2250, but had risen to 120 by the mid-24th century.

I see two reasons why this could be possible:

Not the answer you're looking for? Browse other questions tagged star-trek star-trek-tng star-trek-ds9 star-trek-voyager star-trek-tos or ask your own question.

21
How old was Porthos when Scotty killed him?
7
What is the average human lifespan in the 23rd Century?