Is there any discussion of a Back to the Future sequel or remake?

I ask this because it was

The highest grossing film of 1985, Back to the Future launched one of the most successful franchises in Universal's history, including two theatrical sequels, an animated television series, a theme park ride, toys, comic books, video games and apparel. http://www.backtothefuture.com/movies

Following a year-long grassroots effort initiated by this site, the U.S. Library of Congress announced in December 2007 the preservation of the original Back to the Future film by its addition to the National Film Registry.

In other words it was immensely popular. And the last one was made in 1990. That is just about the timeframe where Hollywood goes and starts making remakes or sequels to milk the cow more. Furthermore, you might get a cameo out of Fox or Lloyd before it's too late.

What is the current state of any plans for the franchise?

TL;DR: No. The rights holders refuse to do a sequel, remake, or allow them to be made. 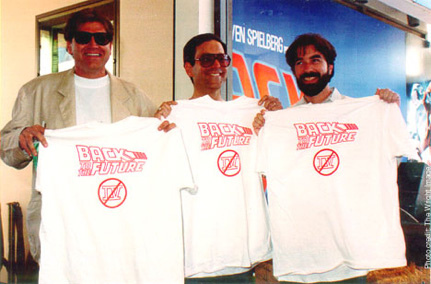 “Let’s face it, we’ve seen a lot of sequels that are made years and years later and I don’t think I can name one that’s any good,” he says. “That lives up to the originals. I don’t think you can recapture it.”

He has no interest in doing a sequel or reboot, or any director's cuts or special editions

“We’re not going to do Director’s Cuts or make a 3D version or change the special effects. People love them the way they are, we think they’re really good. Let’s not mess with it.”

Additionally, Robert Zemeckis (the director of the franchise) has said in no uncertain terms that there will be no remake.

“Oh, God no,” the 63-year-old director told the Telegraph, when asked if – as one of the two rights holders to the original film, along with co-writer Bob Gale – he would ever consider signing off on a remake.

He explains that he and Bob Gale own the rights, and will continue to block the studios from doing so until they die.

“That can’t happen until both Bob and I are dead. And then I’m sure they’ll do it, unless there’s a way our estates can stop it.

The only new BTTF work we might see is a musical which is still in pre-production.

@phantom42 pointed out that that there won't be a movie sequel, but it's worth mentioning that Back to the Future: The Game continues the story where the movie left off.

Bob Gale (co-writer and producer of the film) was involved as a story consultant, and included several scenarios that he and Robert Zemeckis had originally conceived for the films. However, the game is not officially considered series canon.

It's a Telltale adventure game, so it's mainly story-driven: anyone can pick it up, even if you don't consider yourself a gamer.

As Tom Wilson, the actor who played Biff, says in his Questions Song:

Back to the Future IV?
NOT HAPPENING!

Not the answer you're looking for? Browse other questions tagged back-to-the-future sequel or ask your own question.

6
Has the author ever indicated if there was to be a sequel to Freedom™?
18
How is a hoverboard powered in Back to The Future?
8
Is the weather controlled in Back to the Future II?
4
Do any other dates in Back to the Future have any significance out of universe other than November 5?
1
Will there be a sequel to “The Last Magician” by Lisa Maxwell?
3
Was there an intended sequel to “Amelia, the Monkey, and the Magic Bag”?
14
Are there any Forbidden Planet storyline derivatives?