How are Destiny wormholes established? [duplicate]

It has been well established that stargates use 6 points in space and 1 point of origin to establish a wormhole in the same galaxy(7 chevron address, has been told repeatedly in SG-1) for models later than destiny stargates, but how are wormholes established with destiny-era stargates?

The gates put by seed ships before the destiny was launched use abstract symbols rather than actual constellations. It is hard to get 7 points in space when the ship is moving through billions of light years (said in first episode of SGU). Galaxies move as well as the planetary systems, reason it is hard to have 7 points in space. Destiny-era gates only dial gates in close vicinity rather than later models.

For instance, the origin point to the desert planet seen in Air is:

But none of the chevrons used to dial the planet in Justice contain that chevron: 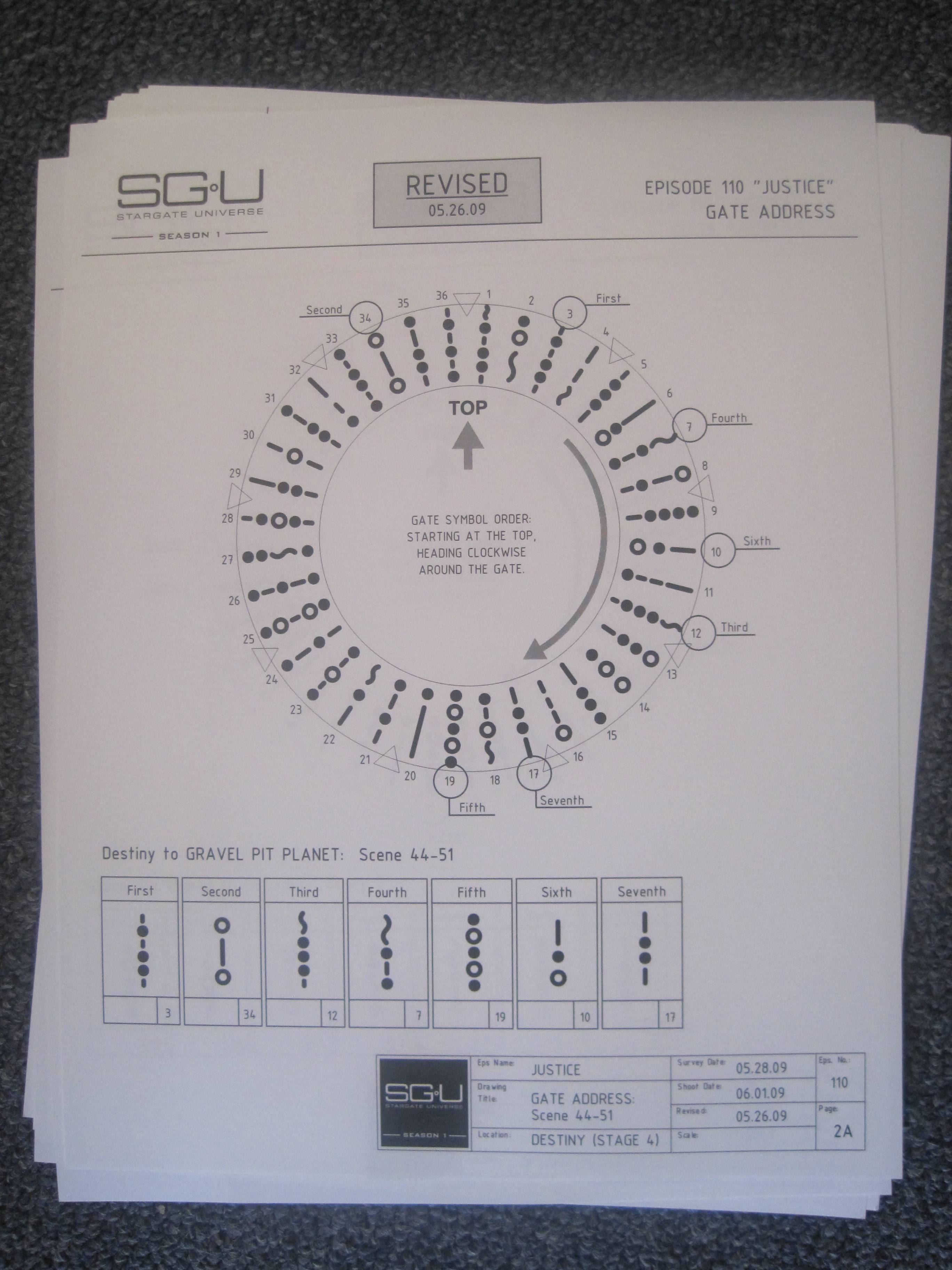 (It should be noted that those two address share two chevrons, but not in the same order, and not as either the first or last chevrons dialed).

Any other details on the what the chevrons stand for are purely speculative. My personal preferred theory is that they're more like serial numbers than addresses, and are given a dialing sequence based on how they came off the production line, and their actual coordinates are later associated with them, like a key->value pair.

As for as the relatively short range of the Seed Gates, this probably comes from the fact that they have no external power source, unlike the Milky Way and Pegasus gates which have DHDs. Seed Gates are only dialed by small remote-like1 DHD2, which has no way to power the gates.

Destiny itself can power its own gate, so in theory it could make considerably longer range connections (such as one back to Earth, eventually?), but the crew is limited by the fact that they need the planet-side gates to be able to reach Destiny. We see this clearly illustrated in the episode Lost, where some stranded crew members have to hop from planet to planet to try and get back in range of Destiny.

I think it has never been fully explained how the address system for the Destiny gates works. At least I don't remember it being explained in full detail in the show and I didn't find a complete explanation in the wiki.

There are a few things however, that we know about the gates:

Additional you have to consider that the modus operandi for the seeded gate networks is entirely different form the (mostly) fixed transportation networks established in the Milkyway or Pegasus galaxies. These were specifically designed to solve the logistical problem of transporting people and goods over interstellar and sometimes intergalactic distances. Because any gate can theoretically freely dial any other gate, they needed a fixed address system that everyone can use.

The gate network set up by the Seed ships however, was only meant to be used by Destiny's crew. They seeded gates on planets of interest either scientifically or because they could provide valuable resources needed to replenish supplies and maintain the ship. They are also only seeded along Destiny's travel corridor and not everywhere inside a galaxy. They can only be dialed using a remote because they were set up for the specific purpose of giving Destiny's crew access to the planet and then let them go back once they're done. It's pointless to have a memorable address because they're unlikely to travel to that planet more than once. While the gates provide a simple and limited network functionality, they were never meant to provide a permanent network.

They couldn't use constellations and had to use an abstract address system because they needed a generic system that works in any galaxy Destiny travels to. In order to make this work they configured the network to keep itself updated via short-range subspace. Each gate in range is aware of any other available gate in range and also it's address and maybe even it's relative position.

From SGU Season 1, Episode 15 - Lost we can reason that addresses are probably unique. Eli not only easily recognizes Destiny's address (also this might be a special case), later on another planet he also recognizes the address of a planet they visited in an earlier episode. This can only be possible if the address is exactly the same as it was when they dialed it from Destiny. As such it seems that each gate has it's very own address regardless of point of origin. What we do not know is if they are unique across all seeded gates (seems unlikely because all seed ships would have to be perfectly synchronized to keep addresses unique) or if they are simply unique within a limited range, like within a galaxy.

This still doesn't exactly answer the question how Destiny can successfully dial a gate with the strange address system. But maybe this address system also works entirely different. As far as I'm aware Destiny is never shown to establish a connection with a gate outside of it's range (Earth being a different topic) despite being capable (given enough power) to make intergalactic connections. It should certainly be able to connect a gate somewhere in the same galaxy. But they never do. In the aforementioned episode Lost Destiny sends a team that goes through several planetary gates trying to find their lost crew members. Who do exactly the same. They don't try to just dial the gate from their previous stop, presumably because they can't.

Which leads me to the following conclusion. I think the gate address of a Destiny-era gate only serves as an identifier, not as coordinates. It only serves to identify a specific gate and Destiny already knows the exact position of the gate from the subspace communication received from said gate. Destiny can't dial gates out of communication range because it doesn't know if the gate is still there.

As far as I know Milkyway and Pegasus gates do not communicate with each other via subspace with the exception of establishing an actual connection. This system his much more suited however, to provided up-to-date information to the Destiny which is just traveling through.

18
Why does the SGU Destiny gate vent?
25
Why did the Ancients wait so long to launch Destiny?
6
How was the alien ship that attached itself to Destiny not vaporized when Destiny went into FTL?
4
Beta Gate Point of Origin Glyph
9
Why don't all the doors in Destiny have pressure sensors?
10
Could the Destiny crew make a pseudo-gate bridge?
11
Why are Stargates in Stargate Universe “less advanced” yet have more advanced capabilities?
16
What happened to the original crew of Destiny?
4
When was Destiny launched?
4
How do the SG Teams stay alive in wormholes?