Identify trilogy: mankind sends off a ship with the last humans on board

I thought this was a trilogy from Michael Moorcock - but maybe not. I can't remember the name of the trilogy or any of the books (the one I read was a three-in-one volume, like The Stainless Steel Rat was).

In book 1, the wisest political and scientific minds on Earth forsee a complete annihilation of the human race on Earth, and build a super spaceship to carry a remnant to a far distant planet - and no hyperspace here... The people were to be kept in cryogenic stasis for a time.

I think the second involves some of the people waking up for some reason.

The third involves several generations later when the people on the spaceship have begun to worship the ship itself (and its computer) as supreme beings, and have no knowledge of the actual facts (that they are on a computer-controlled spaceship vessel). One of the people on the ship dares to "go behind the curtain" (and violates all kinds of religious rules) and finds that they are actually on a computer-controlled ship, and that something has gone wrong and they are about to crash. He saves the day somehow.

UPDATE: Could be by Ben Bova too. I can't remember for sure.

Sheesh. No one with an answer?

I found it. The author was Ben Bova, and the series was The Exiles Trilogy: 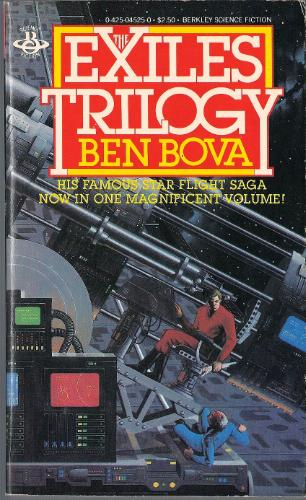 5
Space exploration alien hide outside visible light
7
Identify book - conflict between humans on sublight ship
19
Trying to remember the title of a fantasy teenage aimed novel I read in the mid-1990s
11
Four characters sent to explore space, and telepaths are gorgeous
10
Possible tête-bêche book - symbiote on back/ lost colony finds gun in spaceship
47
Cyberpunk story: Black samurai, skateboarding courier, Mafia selling pizza and Sumerian goddess as a computer virus
44
A man wakes up from stasis alone on a spaceship then creates the greatest story in history
5
Trilogy about an alien craft that crash-lands on a farm on Earth, someone learns how to use it
11
Sci-fi short story where the military build a computer in a space ship that becomes sentient