Story of a large alien artifact that erases memory

Sorry, I realize that this isn't a lot to go on, but here goes...

This was a book I read in late 80s or early 90s and was supposed to be the first book in a series. The book or the next in series may have been scheduled for 1989.

As I remember, the bulk of the story occurs in a star system that humans have recently discovered. The system contains a very large alien device (perhaps a space station). A previous human visited the device and had his memory erased, leaving him in an almost baby-like state.

I think the story revolves around two protagonists who arrived in the system after the first human was wiped (I could be wrong about this point). They try to decide how to proceed, and some major plot point towards the end of the book causes one or both of them to decide to go to the alien artifact.

Possibly Charles Sheffield's Heritage Universe series. This series is set in a universe when there is a large number of ancient alien artifacts. One of them called "Paradox" has the effect you describe of erasing one's memory. In the 4th book in the series Convergence two explorers (and a sentient robot) do explore the artifact.

The wikipedia article describes each artifact. Here's part of the Paradox description:

The artifact known as Paradox is known to have been discovered by Ruttledge, Kaminski, Parzen, and Lu-lan, but may have been discovered many times before. The interior of Paradox contains a powerful lotus field, which erases all memory of any biological or electronic device entering the field. Ruttledge and Kaminski were discovered by Parzen and Lu-lan a few days after entering malnourished and with the mental ability of a newborn infant. Lu-lan and Parzen chose to confirm what happened by sending in one more person. After drawing lots, Lu-lan returned after three days with his memory completely empty, though his somatic knowledge was intact. Paradox has since been declared off limits to all but specially trained investigators.

Paradox externally appears as a slightly luminescent "soap bubble" with a diameter of 50 kilometers, with iridescence similar to that of a real soap bubble. Based upon the transmission of radiation sent through the structure of Paradox, it appears to be complex in the interior. It is thought that it might be a four-dimensional extrusion in space and time of a body of much higher dimension. The purpose of Paradox isn't known, but it has been speculated that the purpose is to blank the memory of other large, intelligent Builder artifacts.

The first book in the series was Summertide. 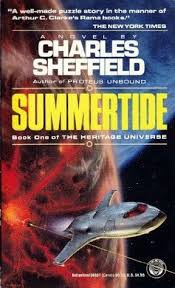 4
Sci-fi story where a pilot transfers his consciousness into his ship and explores the territory of an “enemy” alien race
6
90/80s young adult sci-fi tv show: young girl turns out to be alien princess (or some such)
12
Book Identification: young adult sci-fi with a Christian slant/influence 90s/80s novel part of a series
10
Story About Boy Finding Out His Relative Time Travels
8
Book where man is abducted by crab-people aliens
11
Book: Dystopian Future; Memory Saved on Crystals; Paid Torture for Fun
7
Old story about a boy who travels across the universe
15
Story from perspective of an alien race planning to invade Earth space. Told “don't”
6
Looking for scifi story anthology, 1970s?