Now this one is tough, i have talked to so many people and i have tried to search so much.

I saw a film when i was a kid, it was this strangest thing. In my country the film was actually called "man of steel" / "Stålmannen" :In Norwegian (Though i do not know what title this film had in English, but in my language the film title translates directly to man of steel). The film is Asian i think, and it is about a man that can fly, and he fights huge creatures, like godzillas or something like that. Or huge robots like we see in Neon genesis. I think i can recall this man of steel wearing a full metal suit with helmet.

I can not seem to have found a godzilla movie that has a flying man beating him up. But that does not mean it isn't a godzilla movie or spin-off. This might also be a movie made around 1976-1980 to be a sort of Japanese take on Superman the movie or King Kong.

I remember far to little of the film, because i was very young when i saw it, and that was in the mid-late 80's. So it must of course have been made before this. The effects were not very good, and i bet this film/tv movie released on VHS was made between 1970 and 1988. I could rent this in the video store.

Hehe, i hope some other member here actually have seen this piece of art and can help me out.

Edit: This movie i'm looking for is not animated.

Edit 2: After getting a lot of help from you guys we might be on our way to narrow it down. Mirrorman seem to be the one that comes closest at the moment. But i can not seem to find a full size movie of this character. And he also is to big, i am almost certain the hero i am talking about was not monster size, or it can maybe be my brain tricking me since he is a normal man, then becomes big size as mirrorman. This i cannot say for sure, but mirrormans battles and suit do give me some flashbacks. And it does not seem to be ultraman.

Edit 3: Anyone know if Hong Kong ever made something like this? We have been focusing on Japan all the way.

The year you remember seeing it in is way off, but this sounds a lot like the 1998 Japanese live-action film Dark Soldier D. There aren't many good pictures from it online, but an image of the robot on the DVD cover might ring a bell? It's about a soldier who was recruited to test an experimental armored suit, and then ends up using it to fight giant monsters. The monsters are huge, but the robot suit he pilots is not much bigger than a human. There are some pretty memorable moments - in the second "episode", he fights a giant monster chicken, and then loses his arm in the battle (he gets a mechanical arm in the third part). In any case, this is a long shot, but your description immediately made me think of it.

if the title is Man of Steel may I point you to the Taiwanese film adaptation of the Tokusatsu series "Super Robot Mach Baron'"? That has the alternate title of "Man of Iron" in English or "Iron Superman" enter link description here

Is it also the Taiwanese/Thai/Japanese coproduction movie "MarsMen"? The Jumborg Ace character in the movie was design by the same person who designed Mirrorman 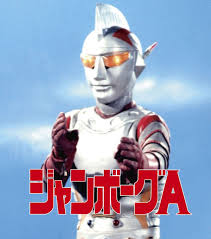 After consulting with a friend who knows more about Japanese TV shows of that period, I have another candidate: The 1978 series Dinosaur Corps Koseidon. This show features Koseider, a hero in a suit with a helmet who fights dinosaur-like monsters (so, similar to Godzilla). The monsters are mostly the same size as he is, but he does fight giant monsters: 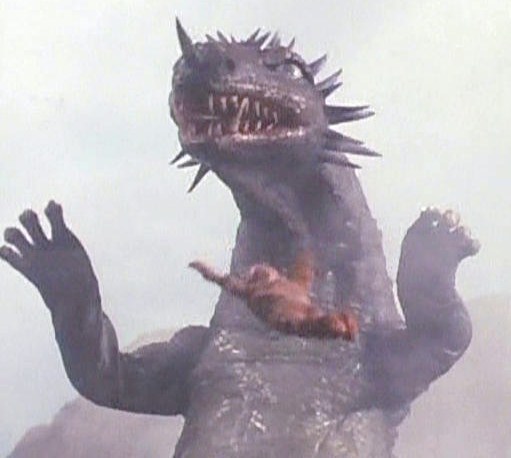 Some other Japanese tv & movie suggestions:

"Super Robot Red Baron" 1973, and it's 1974 sequel "Super Robot Mach Baron". Somewhere in Asia, the 1974 series (Mach Baron) was adapted into an 86-minute feature film which used footage from the original series.

"Iron King". 1972. Ultraman like, & hero is assisted by hat/jacket cowboy character with whip he swings on to fight giant robots/monsters (cowboy that Indiana Jones is based on).

"Giant Robo", or English dub/edit known as "Johnny Sokko and His Flying Robot" 1967 tv series...In 1970, several episodes were edited together to create the 95-minute "Voyage into Space".

Guyver was roughly from the 80's as well. This is the first episode of the anime which aired in ~1989.

Might it be Tetsuo, The Iron Man? This was a live action japanese cyberpunk movie with cheesy graphics, although the first Tetsuo movie did not come out until 1989. Here is the trailer for it:

Was it perhaps Infra-Man? I remember watching this one as a kid, around the same time you're talking about. I don't remember many details about the movie, though.

Could it be Ultraman? This was from the 60s. 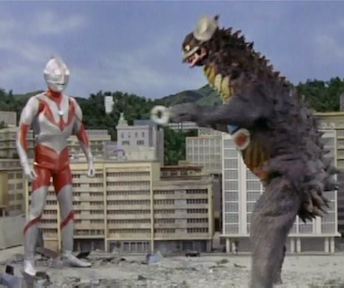 I know what you are referring to.. its a series not a movie..

Sorry it's dubbed in Arabic

It's an old anime series We had it when we were kids but dubbed in Arabic (الرجل الحديدي, The man of steel/man of iron).

I hope this is what you were talking about.

Spectra man is what you're looking for: