Why would the Iconians want to visit Toronto City Hall?

In the TNG episode "Contagion", the sister ship of the Enterprise-D, the USS Yamato, is destroyed. An investigation into the cause leads the Enterprise to a planet in the Neutral Zone whose existence proves that the mythical "Iconians" — technologically-advanced beings who were purportedly able to hop nearly instantaneously from planet to planet — were real.

On Iconia, Picard, Data, and Worf enter a control room in which an inter-planetary gateway appears. It seems to cycle between a number of pre-programmed destinations around the galaxy.

I watched the episode today and — being a Toronto resident at the moment — I was very surprised to see that one of the destinations is Toronto City Hall. In the screen capture below, Worf is standing beside the gateway. The two semi-circular towers and central pod of City Hall are clearly visible, as are the arches over the reflecting pool in Nathan Phillips Square (which City Hall is a part of). 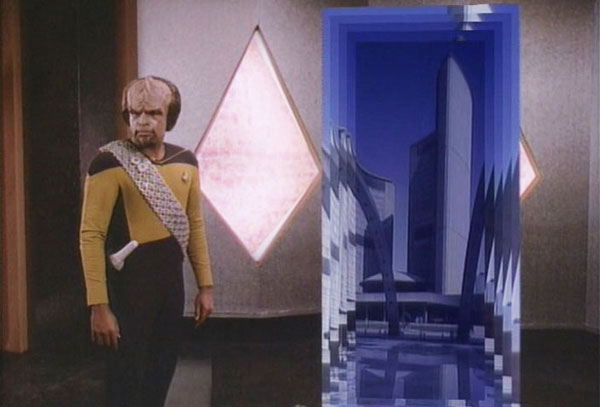 Here is a photo of City Hall from almost the same angle: 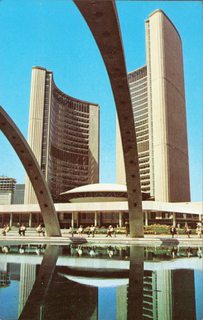 The "Toronto" destination doesn't seem to be random necessarily, since the scene in the episode shows the gateway cycling between what appears to be a fixed number of destinations.

Why would the Iconians want to visit Toronto City Hall (or whatever the building is supposed to represent here)?

I am interested in both in-universe and out-of-universe aspects of this issue. Was this indeed Toronto in-universe, or was it supposed to represent somewhere else? Out-of-universe, how did an image of Toronto City Hall come to be on The Next Generation as an alien vacation spot?

Having done a bit of research, I should add that I am already aware of the following dubious comment in the Memory Alpha article on the episode:

A stock photograph of Toronto City Hall was viewed through the Iconian gateway as a potential destination for the Iconians. Due to the advanced age of the gateway, it is unlikely that this photograph was intended to represent the Earth city.

I can certainly accept that the building is not City Hall in-universe, but I find this unsupported comment dubious because of the way at which it arrives at its conclusion. There is no indication in the episode that the imagery in the gateway is from the time that the gateway was built. On the contrary, the images seem to be current, including the Enterprise-D bridge itself: 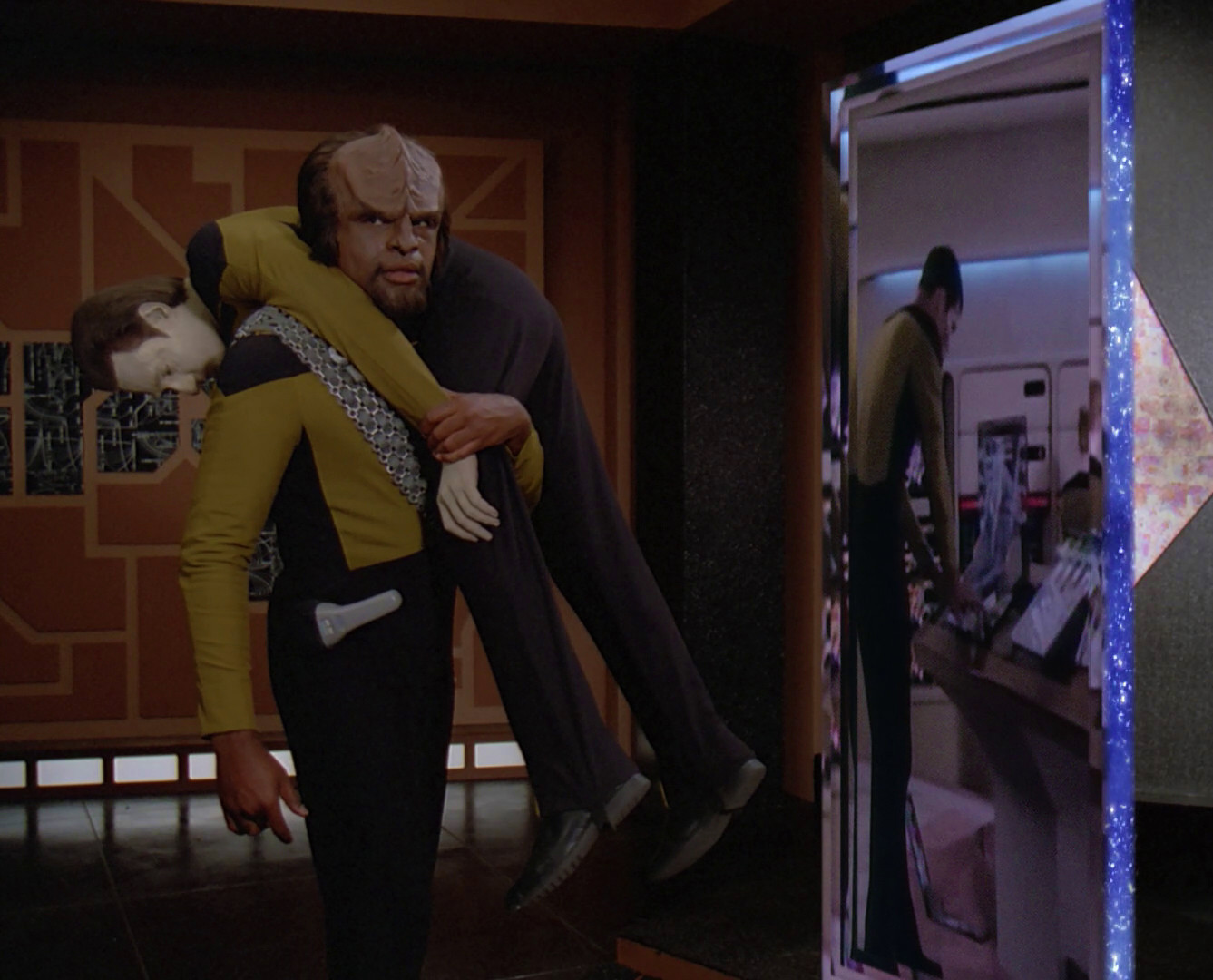 This comment aside, is there any information on the in-universe and out-of-universe reasons for why Toronto makes a cameo here?

Another explanation is the Iconian gateway was semi-intelligent (think a dumbed down version of the Guardian of Forever) and could sense which species was accessing the portal. The gateway would then offer a (random?) location on that species' homeworld as a potential destination.

I don't think the image of Toronto City Hall necessarily implies the gateway permitted time travel into the past. It's not too farfetched that Toronto City Hall would still be standing in the future - after all, the Golden Gate Bridge has certainly survived into the 24th century.

I have several in-universe theories:

In the non-canon TNG comic 'An Inconvenient Truth', it appears that the members of the Starfleet Conspiracy had an Iconian Gateway. Now, we don't actually know where their base was:

it was located either on or in Earth or a near by body.

If we assume that it was located on Earth, it could be that the base was somewhere near Toronto and the gateway on Iconia was pointing to that entrance. A bit of a dodgy theory I concede, as the question then is raised of why it didn't just point directly to the gateway.

This concept is mentioned briefly on Memory Alpha (emphasis mine):

So, the Iconians may have set up this gateway to this particular location, knowing that in the future it would be a large business center on the planet Earth.

We know that the Iconians were a race which visited other planets and were spread throughout the galaxy. It is possible that they had plans of visiting Earth, before the rest of the galaxy ganged up on them and bombarded them from space. They just had not gotten around to visiting Earth yet and the place they chose was pure coincidence that Toronto City Hall was right in front of it.

This is my favourite theory and, although not supported by much evidence, is probably the most reasonable I expect.

Theory 4: Someone was tampering with the gateway

We see that in the DS9 episode To The Death that the Dominion get a gateway and seemingly manipulate it so they have access to several major sites, including Starfleet headquarters, Paris, Dozaria, Paris, Bajor and Cardassia. Now, it seems unlikely to me that the Iconians would just happen to set this gateway to provide access to such strategically important areas during the Dominion War: it is most likely that the Dominion had manipulated it. Hence, I propose this theory that someone else had found the Iconian gateway setup and had been playing with it, perhaps accidentally (or even intentionally) setting one of the destinations as being Toronto City Hall and then walking through, perhaps to a completely different setting!

Theory 5: It's not Toronto!

On the Memory Alpha page for the actual episode (Contagion) the following is suggested:

A stock photograph of Toronto City Hall was viewed through the Iconian gateway as a possible destination for the Iconians. Due to the advanced age of the gateway, it seems unlikely that this photograph was intended to represent the Earth city.

So, perhaps it wasn't even Toronto, but was some other planet altogether! 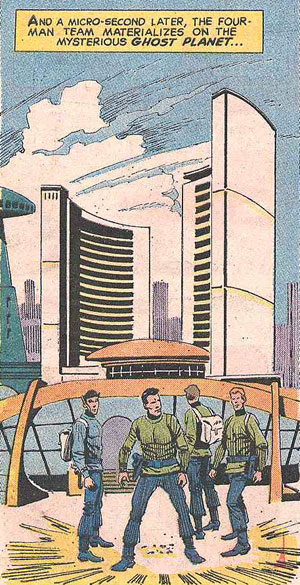 As explained in RobertF's answer (please upvote it!) it may have been that the Iconian Gateway was intelligent enough to detect the homeworlds of the crew and so portrayed it there. Remember that the Iconian gateway also showed the Enterprise-D bridge - it seems a bit peculiar that it would show that merely by chance!

I acknowledge that I have only addressed the in-universe side of the question and I'll keep searching for relevant information about the out-of-universe decision to choose this site.

Attaching importance to the look of people and places and things, etc. is assuming that the frame story of Star Trek involves sending actual recordings of various adventures back in time to the 20th century.

Until there is canon proof of one or the other type of frame story there is no strong reason to assume that the Iconian gateway showed a destination resembling the current Toronto City Hall.

Not the answer you're looking for? Browse other questions tagged star-trek star-trek-tng behind-the-scenes or ask your own question.

40
Why did the Star Trek writers decide Warp 10 would be infinite?
70
Why didn't a French actor play Captain Picard? What was the reaction to this on the part of the French?
32
What happens to the worlds that don't want to join the United Federation of Planets?
9
Why did Data have to help Picard identify a city block?
11
Why would Data believe in an afterlife?
12
Why does Data want to be human?
20
Why did Data want to be human instead of other species?
25
Was Michael Dorn (Worf) not allowed to fly during The Next Generation? If so, why?
8
Why did Star Trek: The Next Generation season 2 only have 22 episodes?