Why aren't the people responsible for creating Ultron arrested at the end of Avengers: Age of Ultron?

In general a lot of destruction is caused, usually to Manhattan, when superheroes take on super villains, but at least you can pass that off as saving the planet from some form of evil. Allowing for future sequels aside, the villains usually get their comeuppance.

Ultron on the other hand was intentionally created by Stark and Banner. Banner disappeared, but Stark just hopped in his fancy car and went on holidays or whatever.

Seems like they got off pretty lightly. Is there an explanation in the Marvel Cinematic Universe for why there was no punishment?

TL;DR - This will probably be dealt with in Captain America: Civil War.

The reason that Tony Stark wasn't arrested for creating Ultron is that it (probably) isn't illegal to accidentally create an evil artificial intelligence from alien technology. [citation required]

However, the concept of Tony Stark taking responsibility for his actions will almost certainly be at least one aspect of the upcoming Captain America: Civil War.

Steve Rogers (Captain America) and Sam Wilson (The Falcon) have found Bucky Barnes (The Winter Soldier) who they have been searching for since the end of Captain America: The Winter Soldier. They begin to talk about what to do next, their dialogue revealing that they a) can't talk to Tony Stark about it and b) something called "The Accords" might stop him from helping, even if he wanted to.

According to Google, an Accord is;

an official agreement or treaty

Which could be a hint that the actions of superheroes (or at the least, Tony Stark) are being restricted by some kind of treaty. This would be similar to what causes the central conflict of the Civil War storyline, which has the Superhuman Registration Act pitting Steve Rogers and Tony Stark against each other.

Now, interestingly, a Twitter account called @Russo_Brothers was recently created, posting up cryptic pictures. For those who don't know, the Russo brothers are the people who directed Captain America: The Winter Soldier, and are currently directing Captain America: Civil War (and will go on to direct both parts of Avengers: Infinity War).

One of these mystery pictures is a very close shot of some text, pictured below; 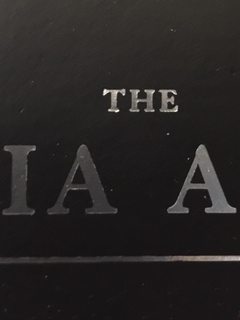 Many people seem to think that this could be the cover page for a document concerning The Sokovia Accords, which (if legitimate) would indicate that there have, in fact, been repercussions from the events of Avengers: Age of Ultron.

Admittedly, this Twitter account is unverified, and there has been no official work on it as of yet, but this article on Birth.Movies.Death (which contains the pictures in question) lists some compelling evidence for why the account may be legitimate - namely:

There are two followers, two very early followers, that make me think this account is legit. The first is Jason Stamey, who works in casting on pretty much all the Marvel movies. The second is Ryan Stankevitch, who is the VP of global marketing for Disney. That, to me, feels like a real smoking gun - why would this tiny account with 31 followers boast a high level Disney marketing exec as its fifth follower?

Later in the article;

Besides the two people mentioned above there's Marilyn Bitner, who runs a locations service for studios. And then there's this guy Andrew Stamm, whose IMDB profile has this:

The article willingly admits that none of the evidence is anything more than circumstantial, but Devin Faraci, the author, seems convinced.

Unfortunately, I doubt we will know for sure about the account's legitimacy or the accuracy of the speculation here until the release of Captain America: Civil War draws nearer.

The release of the first official Captain America: Civil War trailer has confirmed the above - that something called The Sokovia Accords exists, indicating repercussions from the events of Avengers: Age of Ultron. 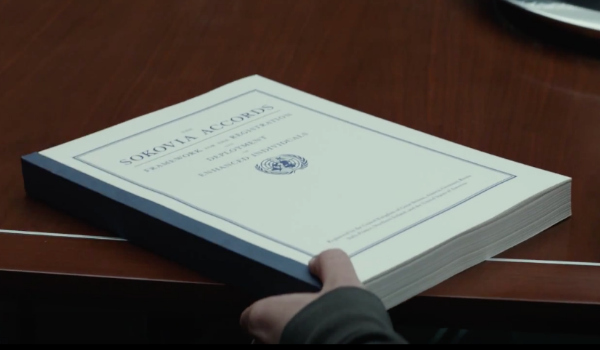 The large-scale destruction occurred in Sokovia. It's likely that once Ultron was stopped, Sokovian officials did not apprehend the Avengers before they left. If there's no extradition treaty between the USA and Sokovia, then the Avengers would be free, they just need to avoid going back to Sokovia. And since in real life, the USA has spotty coverage of extradition treaties with the Eastern European countries that Sokovia was modeled after, I think it's reasonable to say there probably is no extradition treaty between the US and Sokovia.

Captain America: Civil War will likely deal with the international ramifications of superheroes accidentally creating a supervillain who goes on to destroy an entire city.

For starters, either he is recognized as an AI with free will, in which they aren't responsible for the damage, or the people he was acting with would be held responsible on the theory that they were telling him what to do and not the other way around. In which case it's the Witch and Quicksilver that are on the hook for damages.

If that's not sufficient, Stark could conceivably be arrested and held responsible, but Banner has effective immunity -- you could ask him to stay in a nice comfortable room, with a good view and inoffensive servants, where he would of course be free to leave at anytime he liked, with some nice bars to keep out the paparazzi, but putting him in anything resembling an actual prison is unwise.

Think of the Hulk as nation -- you can go to war (try to kill him), impose a trade embargo (drive him away), but otherwise your options are limited.

-2
Who did Captain America and Falcon find?