I know this is going to be extremely vague but I'm looking for an old book series.

I can't remember a whole pile about it other than there were a band of adventurers on some form of quest involving casting an amazingly powerful spell. I vaguely remember the mage/wizards name starting with "D" and him being very opposed to having to cast the spell since I think it sacrificed him in the process?

I remember the mage's academies being really integral to society and each college having a tower with a source of all their power or something like that.

The books themselves had from what I remember mostly black covers and each book had different coloured paper edges such as red and blue.

Alternately this could be Hugh Cook's Chronicles of an Age of Darkness, starting with The Wizards and The Warriors. There is a band of adventurers trying to retrieve an artifact stolen from The Dry Pit, which brings stones to life. There are eight orders of wizardry, each with their own towers, and only a wizard of that order can pass through the walls of that tower. Miphon, one of the wizards, belongs to an order that has a set of "Sleeping Secrets" embedded in their minds, which they have access to. Miphon later faces a choice whether to renounce these or not.

It's possible that you are thinking of Terry Pratchett's The Light Fantastic featuring the "Wizzard" Rincewind. This is the second Discworld book, and the one where the setting begins to take on the character that we come to know and love later on (the first book has some material that is not quite in keeping with what the Disc would become---well, he wrote it before he understood the scope of what he was getting into).

Rincewind and Twoflower are rescued from where we saw them in the final page of The Color of Magic falling toward their (almost) certain doom, and magically brought back to be near enough the center of the action. Where they are hunted by competing teams from the Eight Orders. They escape on a broomstick, land on a computer part being delivered, meet Cohen the Barbarian, and get embroiled in the chaos caused by the red star. Eventually they make their way back to Unseen University and save the day. Also, Cohen gets some teeth. 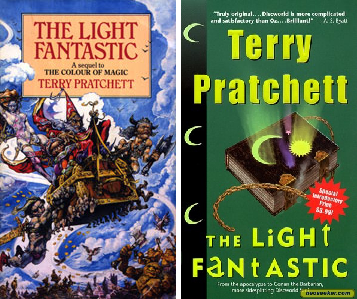 There are no towers for the eight orders in this book, though the wizards do break into open warfare and erect towers in Sourcery (the next Discworld book to feature Rincewind in a significant part).

The single book containing the eight spells is the Octavo. But when Rincewind does, eventually, read all the spells each mystic rune he speaks appears in colored light and floats about him.

4
Looking for a 70s/80s YA Fantasy Quest Novel with a Reluctant Heroine in a Celtic-like Culture
12
Looking for fantasy fiction novel series with a male witch and dragon
8
Fantasy novel with two young boys who find a portal and are given a quest. Wolf on the cover
6
Fantasy quest novel where the music magic hero doesn't get the girl
5
Fantasy novel about a nobleman on a quest