Is there more than one species of elf in Tolkien's Legendarium?

I recall that in The Hobbit, the company of Dwarves was captured by "Wood" Elves. I don't remember if LOTR mentioned Elves in any other way than "Elves". Is there more than a single type of Elf in the saga, or are they a single species?

While the answers provided in this negative elf question were informative, they did not answer my question.

tolkiens-legendarium elves
Share
Improve this question
edited May 7 '17 at 19:10

There are three more kinds of Elves described in The Hobbit, in addition to the Wood-elves (emphasis mine):

The feasting people were Wood-elves, of course. These are not wicked folk. If they have a fault it is distrust of strangers. Though their magic was strong, even in those days they were wary. They differed from the High Elves of the West, and were more dangerous and less wise. For most of them (together with their scattered relations in the hills and mountains) were descended from the ancient tribes that never went to Faerie in the West. There the Light-elves and the Deep-elves and the Sea-elves went and lived for ages, and grew fairer and wiser and more learned, and invented their magic and their cunning craft, in the making of beautiful and marvellous things, before some came back into the Wide World.

The Hobbit Chapter 8: "Flies and Spiders"

All of these Elves, and more groups besides, are a single species1, and all Elves can trace their roots to Cuiviénen. Although there are many subdivisions among the Elves, they're based on history and geography rather than biology.

"The High Elves of the West", in the quote above, is a reference to the Calaquendi, the Elves who journeyed to Aman in the Years of the Trees, and the three groups named correspond to the three tribes of the Calaquendi:

But those are only the Elves who went to Aman; there are many more groups who didn't, of which the Wood-elves are one tribe:

Although these splits occurred a rather long time ago, in human terms, with Elvish reproduction there hasn't been enough time for significant evolution; the longest chain of ancestry I can find is Arwen's, which connects us to YT 1050 in only six generations3, not enough time to speciate.

1 Strictly speaking, Elves and Men are the same species

2 The term "Dark-elf" isn't used entirely consistently in Tolkien's writings; in some contexts it refers to the Moriquendi, those Elves who didn't behold the Light of the Two Trees of Aman (a group which includes the Nandor and most of the Sindar4), but in some it refers exclusively to the Avari. It's also not to be confused with the epithet "Dark Elf", applied to Eöl

4 Thingol is generally not counted among the Moriquendi, because he had visited Aman before the Great Journey even began, with the intent that he help convince the other Elves to come

They are all a single "species", in the sense that they were all created at the same time and are the same kind of being. Over time, they've split off into various communities, depending on where they lived, who they chose to rule over them, etc. The entire family tree of the Elves is rather complex: 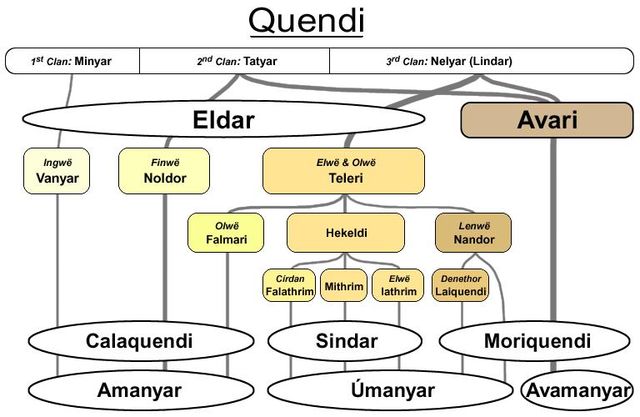 The three "clans" of Elves that eventually came to Middle-earth were the Vanyar, the Noldor, and the Teleri, though the Vanyar had largely left long before the time of the novels. The Elves of Rivendell (Elrond and his clan) were of Noldor descent, while the ones in Lothlorien (the "wood elves") were primarily Telerin. The only trace of the Vanyar we see (as far as I can recall) is that Galadriel was descended from one of the leaders of the Vanyar.

Since they tended to live in isolation, the different "clans" of Elves developed their own behaviors and tendencies. For example, the "wood elves" of Mirkwood (like Legolas and his father) were descended from the same ancestors as the elves of Lothlorien, but they behaves very differently.

"Species" isn't the right word here; nor would "race" be, really. Maybe "breed" comes near the mark.

All the Elves are descended from the same folk that awoke in Cuiviénen in the earliest days of the First Age, well before the rising of the Sun. They dwelt there for many years before being discovered by Oromë, one of the Ainur (gods/angels), who summoned them to Aman. Many agreed, and became Eldar, the High Elves; the others who refused were called Avari, unwilling. Not all the Eldar arrived in Aman - the Sindar turned back before crossing the Great Sea - and even some of those that did, the Noldor (among them Galadriel), later rebelled and returned to Middle-Earth. But nevertheless the Eldar as a group were still considered nobler than the Avari.

The Avari themselves remained in Middle-Earth and spread all over. At the time of the War of the Rings, the elven countries - Lothlórien, northern Mirkwood, Rivendell - were ruled by Eldar but mainly peopled by Avari. The Wood-Elves were one of these groups of Avari.

All of the Elves in the Tolkien Legendarium are descended from those that awoke at Cuivienen and are referred to as the Quendi. They are all the same species. The different names just refer to different groupings of Elves.

There were initially three groups of Elves:

Beyond this, the first distinction that occurs is between those that initially followed Orome to Valinor (the Eldar) and those that stayed behind at Cuivienen (the Avari). Note that some of the Avari did eventually expand westward into Beleriand after a while.

Along the way, some of the Eldar stopped following Orome and became the Umanyar. They were split up between (what would become):

The Avari and the Umanyar together are referred to as the Moriquendi.

Of the Eldar that followed Orome all the way to Valinor, they were split into the Vanyar, the Noldor, and the Falmari (a group of the Teleri).

Later on, some of the Noldor returned to Middle-Earth with Feanor.

34
Why were the doors of Moria made so easy to open?
36
Does any of The Hobbit's negative impression of Wood Elves survive in Tolkien's other writing?
18
Who was the Queen of Mirkwood?
8
Who does Tolkien include in the category "The Wise"?
7
Were Prince Imrahil and the Men of Dol Amroth southern Dúnedain?
8
What became of Lenwë and the Nandor who stayed with him?
0
Tolkien's Hierarchy of Creation Cheat Sheet
2
What happened to the Moriquendi after the First Age?

15
Why aren't there any recognizable elf children in Middle-Earth?
20
What is the Elven Diet?
13
Who was the first female dwarf identified by name in the Hobbit/LOTR saga?
2
How much magic did king Thranduil and the elves of Mirkwood possess?
29
Was Elrond always supposed to be an Elf?
36
Does any of The Hobbit's negative impression of Wood Elves survive in Tolkien's other writing?
19
How does interspecies reproduction work in the Lord of the Rings universe?
10
Tolkien's capitalisation of races, i.e. Elf, Dwarf, Orc
20
Were there Gnomes in any of Tolkien's works?