How well can xenomorphs survive the vacuum of space?

I recently finished playing Alien: Isolation (which I assume is not canon). Near the end of that game, you have to go on a spacewalk, and some xenomorphs follow you outside. 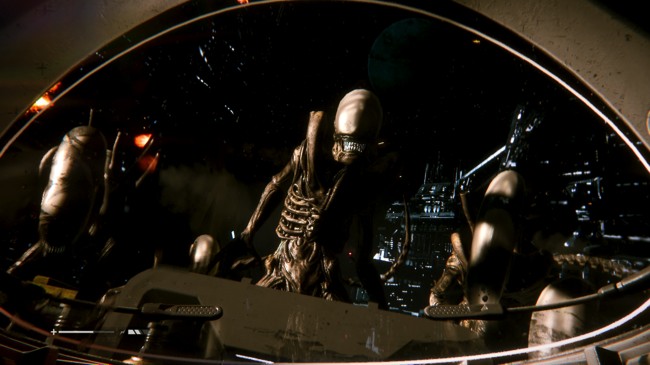 I've heard some people claim this is a plot hole, because (in real life) no living thing can survive in space unprotected.

But when I watched the original Alien movie, it seemed like the xenomorph was functioning more or less normally during the brief period after Ripley ejected it from the shuttle but before the engines fried it, so I had assumed it was capable of moving around in a vacuum (at least for a little while) without any serious harm.

However, when I went back and rewatched that scene just now, I couldn't tell whether the xenomorph was actively grabbing onto the hull or just bouncing around because the harpoon in its torso was still connected to the shuttle, so maybe I was imagining things.

So the question is: What canon evidence do we have about how well xenomorphs can or cannot function in the vacuum of space, or how long they would survive in it?

I hate to be a stick in the mud, but the answer is quite unequivocally "it depends". (I'm not even sure "canon" evidence applies here, since you're referring to a plot hole.)

It depends on so many factors that the physiology of the particular xenomorph would need to be known to make a prediction.

If the creature evolved on a large planet (more gravity, higher atmospheric pressure), it may have evolved a stronger skeleton in order to maintain mobility - or even compensated with a strong exoskeleton instead of or in addition to an internal one - which might lead one to believe that it would withstand a vacuum better (less deformation at 0 atmospheres.) But if the creature has a vascular system (which is common in multicellular organisms), it has evolved under the same conditions as the skeleton: at a higher atmospheric pressure.

The problem with vascular systems in space is that the unbound dissolved gas comes out of solution at the sudden lowering of atmospheric pressure - exactly like having "the bends".

For a creature accustomed to a higher atmospheric pressure, the result of being in space would be more dramatic, not less.

If the creature evolved under a lower atmospheric pressure - say, a smaller planet or at a higher elevation than sea level - they would do better. This is why sherpas do better at higher altitudes than their non-sherpa counterparts on the mountains: they've evolved mechanisms to deal with lower atmospheric pressure (and therefor lower oxygen levels). Their blood vessels are more expandable than their non-sherpa counterparts, so there is less cerebral and pulmonary edema as well.

If you put a European from sea level and a sherpa into space, a sherpa would stay conscious marginally longer than the European. (Humans stay conscious - kind of - for 10-12 seconds in a vacuum.)

Since the creature in Alien seemed to thrive in the same conditions as humans, I'd guess their adaptability to a sudden vacuum would be about the same (though tissue swelling seen in humans might not appear because of their partial exoskeleton).

And this is taking only one aspect - dissolved gasses in the vascular system - under consideration. It doesn't take into account gas filled spaces - like lungs or intestines.

It depends on the xenomorph: their home planet size, their vascular systems, their cellular structure, etc. It all matters.

Evolving altitude aptitude
If you don't know about Joe Kittinger, you should; he is a phenomenonal person. He went into space in a pressurized suit in a balloon, before astronauts, to help study the effect of high altitude on pilots who faced emergency ejections. His glove was damaged and he had to duct tape his wrist, which cut off circulation in space. Though his hand swelled, it returned to normal.

Microorganisms can actually survive in space as the Russian and American spaceships found out, more complex organisms...not so much.

More complex organisms are much more a problem. The first and foremost problem is the vacuum, an organism needs to maintain pressure if it contains fluids because otherwise the fluids will boil off and/or freeze (see below). Even humans can maintain consciousness for some seconds and our skin is resistant enough to maintain blood pressure, but it will kill us in short time.

Now if the alien is moving, it needs energy. We generate energy by inhaling oxgen, "burn" stuff (it is lower temperature, but it is really no difference to burning) and exhaust carbon dioxide. No oxygen => no energy available => we cannot move. We can use that for the xenomorph anatomy. So if the xenomorph need to breathe, even if it is able to withstand vacuum and hold their breath for a long time, their energy will rapidly deplete and they won't be able to move anymore. The only thing to avoid that is to have some kind of energy storage, but their strongness and agility works against that, they will need too much energy to maintain a sufficient storage.

The second problem is freezing (if the spaceship is far away from the sun). In space there is no heat conduction or convection, so any object will give off heat radiation and cool rapidly (The energy loss is proportional to the fourth power of temperature, so cool objects are cooling at a much lower rate than hot objects). The alien will not be able to prevent that, so being in space for a longer time will freeze everything inside and the alien is neutralized.

One possible strategy for the alien is to hibernate: Shut down the own life functions and use a protected mechanism to revive if the temperature rises again. Normal cells of complex organisms will retain irreversible damage when unfreezed, but as a biological weapon it is possible that the alien has something like that.

I mean if the facehugger was able to survive the incredibly hazardous planetoid while they were dragging Kane back to the ship, one can assume the final life cycle of this creature is more resilient and has higher adaptability. The species responsible for the xenomorphs supposedly harvested the best aspects of species all over the galaxy(if not universe). It is a bio-organic lifeform similar to cell from dbz. I don't see it surviving the vaccum of space that unbelievable.

The alien is never scene actually eating human flesh. One can assume it doesn't have to have a food supply so perhaps it could generate its own bio matter for it body. It was dubbed the perfect organism because it can adapt to any habitat beyond the point of the complete incineration of its body (or internal organs and its brain) in order for it to die.

Since the Xenomorph has Molecular Acid as blood it is conceivable that it directly oxidizes whatever it consumes. This oxidative reaction is generally exothermic, and as such could provide the necessary energy to survive without requiring too much oxygen. Since this oxidation would provide free protons, these could be used for the direct reduction of ADP to ATP (When the third phosphate is removed from ATP, you get ADP), assuming the Alien uses a similar molecular encapsulation of energy as creatures on this planet.

From a 'resistance to decompression' perspective, the Xenomorph should do pretty fine due to it's armored body. Let's not forget that Xenomorph have evolved to be very adaptable to many different environmental conditions, so even from this point of view they should be able to resist space vacuum very well compared to other species.

Not the answer you're looking for? Browse other questions tagged space alien-franchise or ask your own question.