How and when/where did Jim Kirk learn to code?

At Starfleet Academy, Jim Kirk cheated on the Kobayashi Maru test by hacking the test and inserting code that he wrote enabling him to win in the otherwise unwinnable scenario.

So when did Kirk learn to write code? How old was he when he learned? Where? Are there any references to names of programming languages?

He probably learned to program at Starfleet Academy

Note, nowhere that I can find indicates that Kirk actually wrote code per-se, only that he reprogrammed the situation.

In the Alternate Reality (2009 reboot), and probably in the prime reality, Kirk was

According to his dossier at the official Star Trek movie website, as a Starfleet Academy cadet, Kirk was top of his class in survival strategies and tactical analysis and the assistant instructor in advanced hand-to-hand combat.

I pay close attention to the 'tactical analysis' part - now surely in an age when computers are so important such as the 23rd century, the need to understand how a computer works, or at least know some programming, would be pretty important in tactical situations.

Out of canon, TOS - Starfleet Academy novel: The Gemini Agent

During the Academy's "dead week" in May, Kirk experienced a mysterious illness which left him with a six-hour gap in his memory. He was charged with fifteen violations of the Cadet Honor Code and became a suspect in a bizarre computerized attack on Cadet Pavel Chekov.

The excerpt I've emphasised indicates to me that, if Kirk was a suspect, it was probably well known that he knew how to program a computer.

Also, consider how computers are interacted with in TOS; it seems to be mainly based on voice-commands. We also see that programming doesn't really involve a 'language' per-se, at least that is what is indicated from The Menagerie when Spock 'reprograms' the computer: 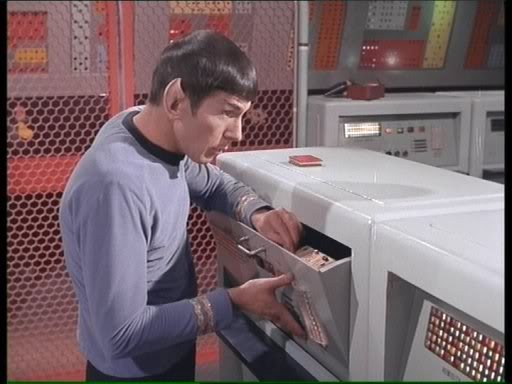 So, Kirk probably needed some more skills than just talking to the computer to reprogram it in the Kobayashi Maru, but considering his education at Starfleet where learning how to survive is a fairly important skill considering the various situations you could find yourself in, there was probably a standard course in at least computer programming, although probably not 'programming' in the way we would understand it today!

Programming is probably either much simpler or much more complex in the 23rd Century. However, I have a little experience in modding code, and once you find certain values in the program it's pretty simple to change them to higher or lower numbers. He could've found something like "klingondamage=2000" in the computer files, for example, and altered it to "klingondamage=1". If he had somehow gotten editing privileges for those files, it's that simple.

Of course, programming could use a different system altogether in the future, but based on some personal experience this is how I would alter the Kobayashi Maru scenario.

91
Are there any programmers in Star Trek?
15
Where else do we see James T. Kirk, computer hacker extraordinnaire?

9
What rank was Kirk when he first boarded the Enterprise in Star Trek (2009)?
11
Did Kirk make a racist remark?
17
How effective is the Kobayashi Maru as a training exercise when everyone knows it is an unbeatable scenario?
13
Where did Scotty learn to type?
50
How did Kirk manage to get Captaincy of the Enterprise despite just graduating from Academy?
7
How far did Scotty beam himself and Kirk?
6
Are there Star Fleet non-disclosure agreements for tests?
23
Do we know exactly where Kirk will be born?
15
How secret is the Kobayashi Maru test?
6
Doesn't Data know the Kobayashi Maru?