There was this series I watched in the early 90s, about a group of soldiers fighting against some androids (or aliens, can't remember). The enemies definitely looked like androids, but I can't recall if they were robots from Earth or aliens.

The only enemy unit I can remember had wings, with birdy head. There were also terrestrial units.

The enemy's weapons shot lasers. I first thought people were being disintegrated, but later found out they were actually teleported to the enemy's HQ.

I can't remember much more, just that it was on Earth, where all the cities were basically reduced debris and fights would happen through the remains.

Might this be yet another dim memory of Captain Power and the Soldiers of the Future (1987-88)?

One of the “Bio-Dreads” (monstrous creations that hunt down human survivors of the war between men and machines) on the show was a sort of metal pterodactyl thing called Soaron, and was portrayed using CGI. 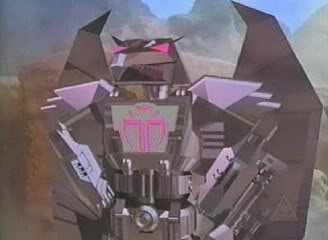 Wondering if this could be Cleopatra 2525?

9
Kids’ show with toys to shoot at the on-screen images
14
1990s sci-fi series where humans in armed suits fight robots
5
What live-action 80s show had a metal pterodactyl?
4
Film watched from VHS around 1986 with a team suiting up in full-body suits and masks

8
Collection of youth short stories about aliens 1990-1994ish
25
90s (or earlier) TV episode: man in a prison cell with a woman being changed into an alien
11
Books from the 80s or 90s involving a dystopian future earth with orbiting space stations
11
Story of a man who is sole survivor of a crash landing on a planet with cities from extinct alien race
6
90s manga/anime about pilots merged into the backs of Gundam like suits
9
Anime movie about space aliens and robots
10
1980s - 2000s anime with soldiers fighting spectral monsters that kill on touch