How have Superman comics dealt with the Man of Steel, Woman of Kleenex problem?

When I was a teen and Superman II came out, when Superman realized he and Lois were in love, he de-supered himself in the Fortress of Solitude so he could be with Lois. Right after he emerged from the crystal cage that drained his powers, the first thing he does is take Lois' hand and escort her to a conveniently placed bed that we had never seen there before. This implies it was necessary for him to lose his powers so he could have sex with Lois.

The problems involved in this situation are well covered in the wonderful essay by Larry Niven, Man of Steel, Woman of Kleenex.

But I also know that Superman has been in the comics for decades. A friend of mine once said, "Oh, he tells her who he is a lot, but he always makes her forget it again later."

So how have the comic books (since this is Superman's primary medium) handled this? Were there different ways it was handled, or was it always handled the same way? Have they literally kept Superman and Lois from having sex for decades? Or have there been times when they've ended up in bed together? How do they deal with the issues of the Man of Steel having sex with, and not killing, a woman of Kleenex?

In The Dark Knight Strikes Again Superman has the following exchange with his daughter Lara:

Lara: So what about sex?
Superman: Never with Terrans. They're too fragile.

Peter Sanderson speculates that "Man of Steel, Woman of Kleenex" influenced that.

Apparently having read Larry Niven's "Man of Steel, Woman of Kleenex," Superman replies, "Never with Terrans. They're fragile." This may be the explanation of why Superman turned from Lois to Wonder Woman.

On the question of Superman having been in the comics for decades, like all comic heroes Superman get retconned occasionally to bring him to the the present time.

In Superman: Doomsday Superman and Lois having been in a romantic relationship for awhile. Since Superman clearly retains his powers, it is unclear how this is accomplished because of Lois' fragile human body.

In Smallville Season Seven Lana and Clark are struck by lightning and Lana gains some of Clark's powers for a short time. They take this opportunity to engage in some physical activity that normally wouldn't be afforded them.

Generally, the more intimate affairs of Clark and Lois aren't taken into consideration. They are glossed over and not given even a 'wink and nod' treatment.

That said, there have been various techniques villains have used to strip Superman of his powers. Some were magical, some were technical, and some were silly.

It's certainly possible that Superman can use a captured widget to suppress his powers when needed.

I often wondered, in fact, why Rogue didn't hang on to one of the collars from Genosha, for the same reason.

I don't know of specific instances where they've discussed the logistics of Kryptonian on Terran coitus, but I do know that it has occurred between Lois and Kal-el.

In the For Tomorrow arc (Superman vol. 2 #204 - #215, also available as collections), there is a scene that makes it quite clear that Lois and Superman have sex. 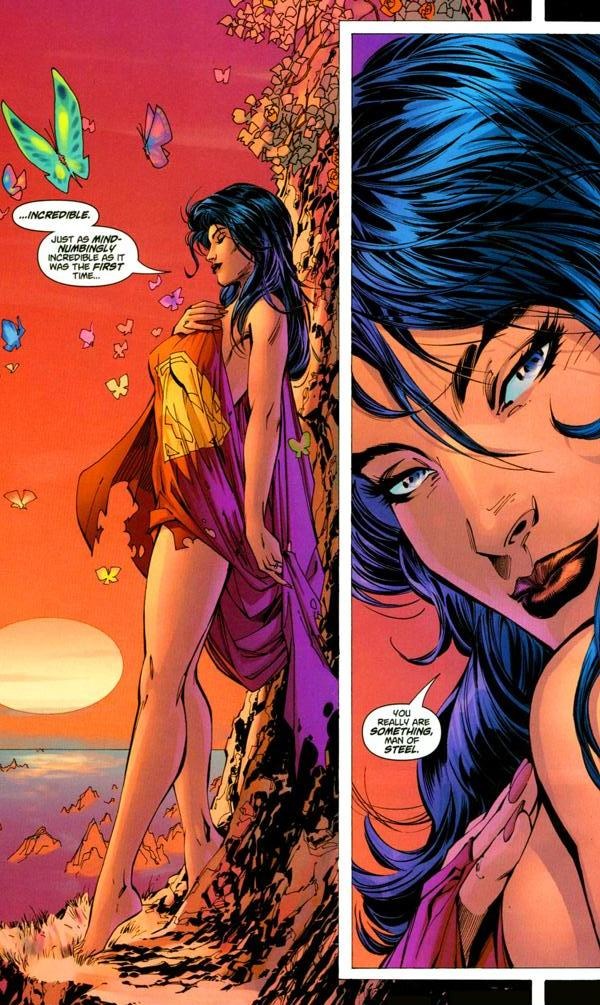 Just as mind-numbingly incredible as it was the first time

Let us know that it's happened at least once before.

Now, to clarify, this scene takes place in an alternate reality stored in the Phantom Zone, so there may have been some special conditions that allowed the event to take place. Similarly, we're not given details on the first time, or any previous time, so they may have also occurred under special circumstances, such as those @Jeff has suggested.

The comics tend not to broach this issue, as it's obviously a rather adult topic, and Superman comics are mostly intended to be suitable for young readers as well as older ones.

The closest I've seen them come to addressing it was in Adventures of Superman Annual Vol 1 #3. This story was set in an alternate future branching off from the then-current Post-Crisis continuity. In it, Lois became pregnant with Superman's child, but died as a result of internal injuries sustained from the fetus kicking within her womb. 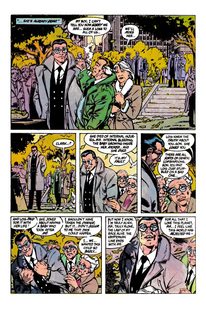 Ridden with grief and guilt, Superman exiled himself from Earth, flying off into deep space. There, he encountered Maxima, a superhuman alien woman from the planet Almerac, whom he'd previously met and fought in Action Comics Vol 1 #651.

Possessing the power of telepathy in addition to super-strength and psychokinesis, Maxima quickly picked up on Superman's reasons for leaving Earth, and after building a rapport with him, she pointed out that if they were to marry, he'd never have to hold back, in war or in love.

Superman's thoughts revealed that he'd "had to be so careful" in his dealings with earthlings, both in war and in love, implying that, when making love to Lois, he just held back sufficiently so as not to harm her. 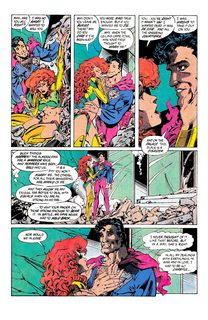 Whether that's a convincing explanation or not is another matter, but so far as I'm aware, that's the only one we've been given in respect to how Superman and Lois can engage in coitus while he's fully powered.

As it happens their wedding and honeymoon in the Post-Crisis canon took place during a period when his powers weren't functioning (a lingering consequence of The Final Night storyline), so it wasn't an issue during that brief spell at least. 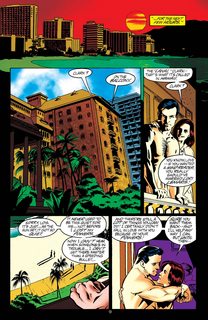 -1
Can a kryptonian male and a human female conceive a child while on earth?
0
Is it possible for Superman to have sex in a red sun chamber?
27
Is Batman's 'relationship' with Wonder Woman comic-book canon?
-5
Why did Superman relinquish his powers before pursuing a sexual relationship with Lois?

8
According to DC Comics, could a Kryptonian and an Earthling have offspring together?
27
Is Batman's 'relationship' with Wonder Woman comic-book canon?
37
In comics, how many people have been killed by Superman?
3
How did Superman play the "disappearing" game as a kid?
3
Do Kryptonians know about the effect of yellow suns and how did they use it?
15
Why does Superman love Lois Lane?
16
How did the Kents raise a super-baby?
8
Even with his powers, doesn't Superman train and work out?