Inspirations for "Little Nemo in Slumberland" and "Dreams of a Rarebit Fiend?"

Winsor McCay, for those that don't know the name, was a comic strip author in the early twentieth century. While reading up on him, what I found in the Wikipedia is typical. It states all the many, many artists and writers he's influenced through the years (including Maurice Sendak, for example), but I can't find references to what his inspirations and influences were.

Both Little Nemo and Dreams of a Rarebit Fiend were stories about dreams. (Little Nemo was originally in Little Nemo in Slumberland and later in In the Land of Wonderful Dreams.) Little Nemo fell asleep each night and went on an adventure and awoke the next morning. The later was about the phantasmagoric nightmares of people after eating Welsh rabbit (rarebit) or other unusual dishes. Both strips were quite fantastical and Little Nemo, especially, visited some amazing fantasy settings in dreamland and McCay experimented with interesting arrangements of the panels in his strip.

While it's easy to find out who claims to have been inspired or influenced by McCay, I've wondered for years what inspired and influenced him. Is there any record of what influenced his work with Little Nemo or Dreams of a Rarebit Fiend?

A possible influence is Jacques-Marie Gaston Onfray de Bréville, known as Job.1 Here is “Un rêve agité,” a work that may have inspired McCay: 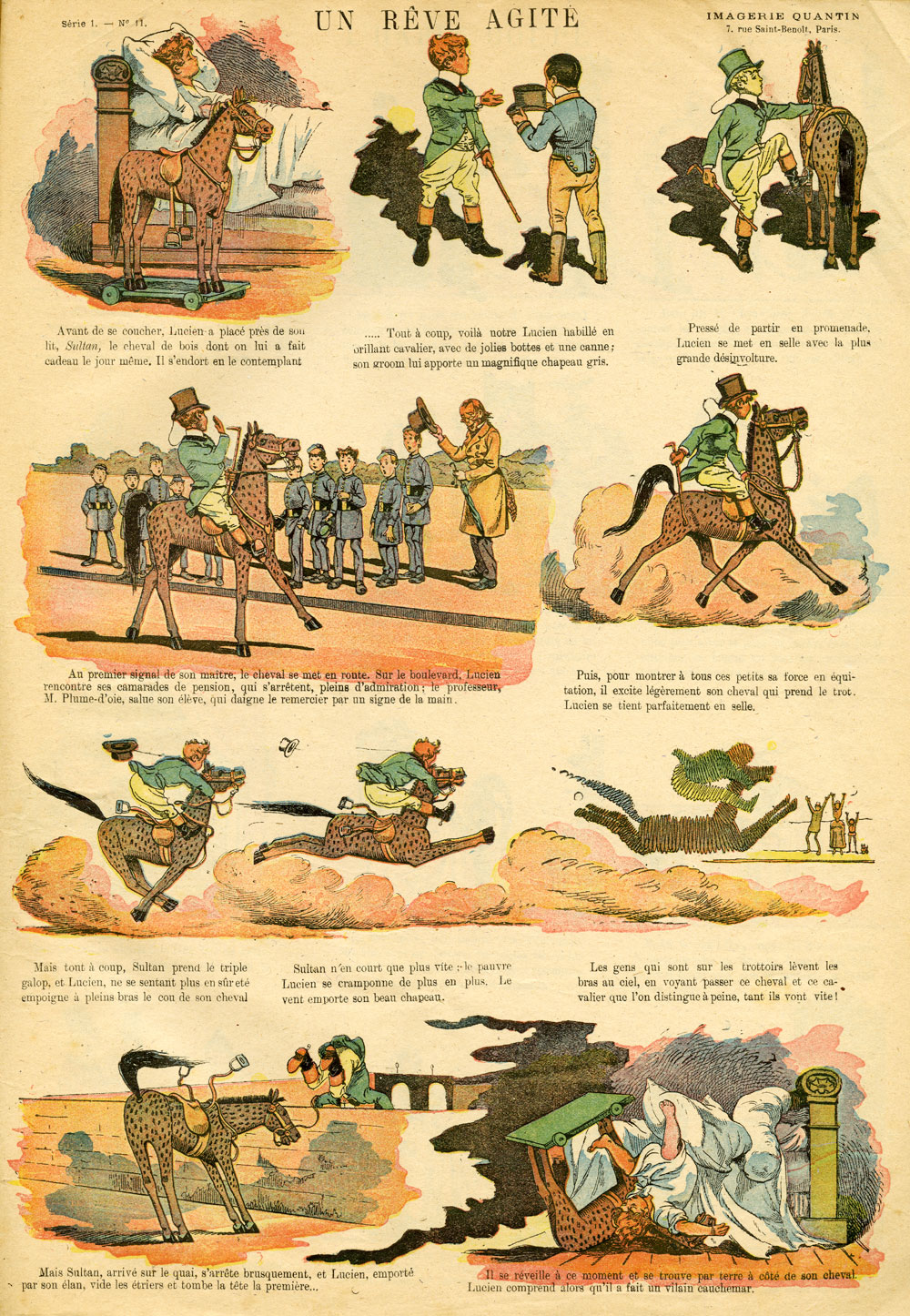 In particular, as discussed here, there are significant compositional and thematic similarities between “Un rêve agité,” or “An restless dream,” and Little Nemo. Here’s “Little Nemo in Slumberland”: 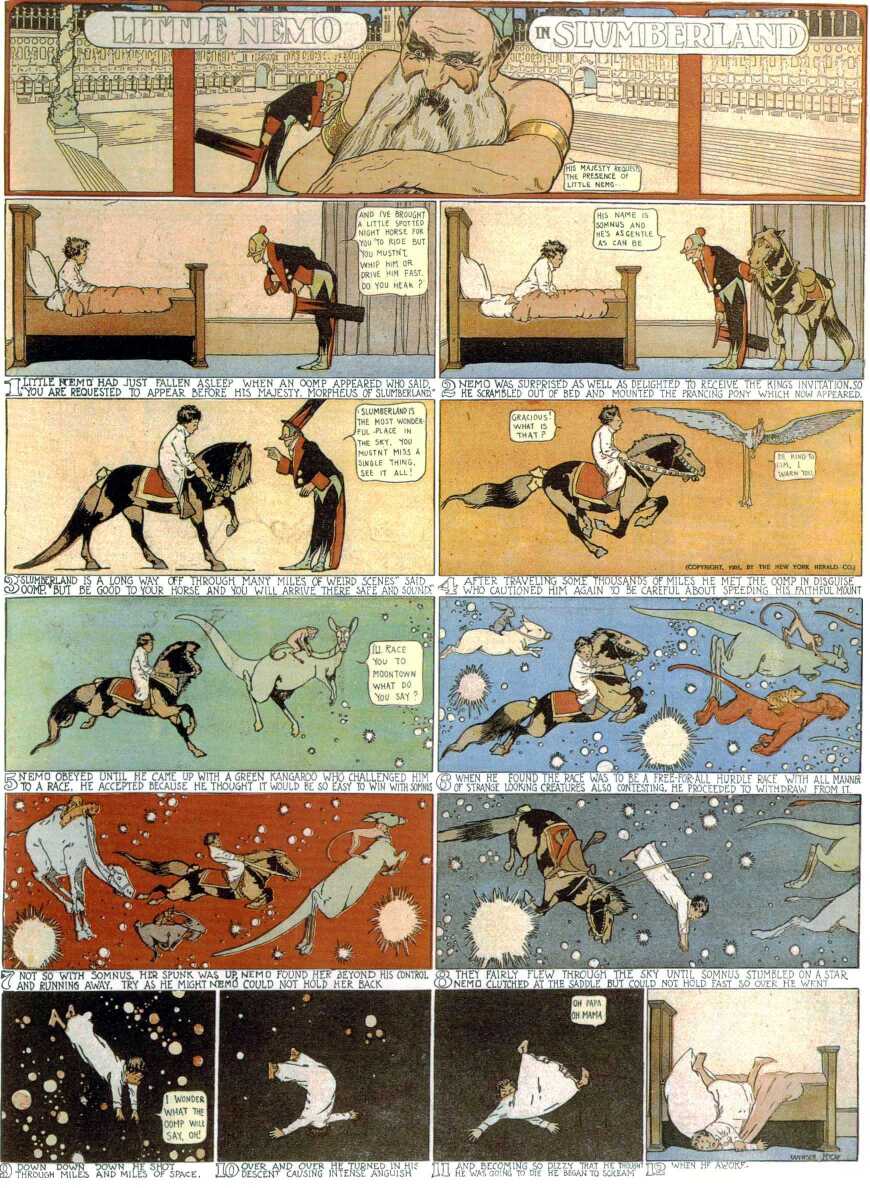 Here is a side-by-side comparison of the two works: 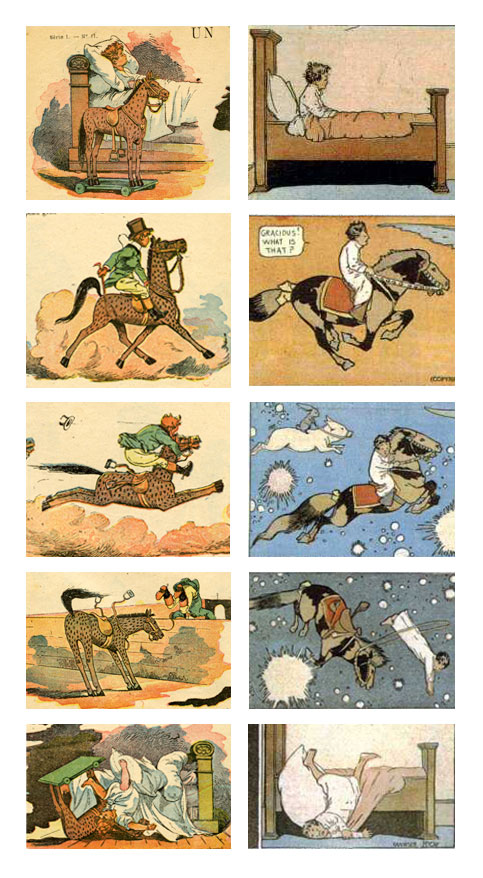 Articles elsewhere on the same site claim to have found other similarities between certain other of Job and McCay’s works: 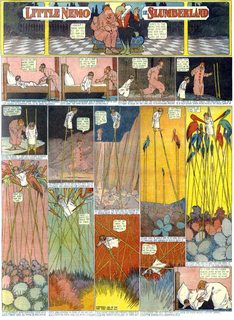 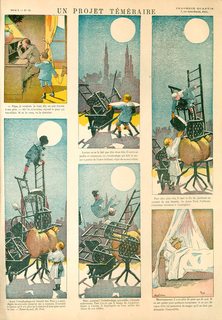 This is far more uncertain, though, since it relies on the supposition that the author of the first work, who went by the pseudonym Rip, was in fact the same as Job. Nonetheless, such similarities, if they indeed indicate that Rip inspired McCay, still indicate that McCay was familiar with Imagerie Quantin, the same publishing house that released “Un rêve agité.”

How might McCay have become acquainted with de Bréville’s work? As the linked article speculates:

Could it be that the publishing house was part of the French delegation to the 1893 Chicago World’s Fair, an event that inspired McCay?

The article here alludes to the references to the Columbia Exhibition that have been recognized in McCay’s work.

Credit to Eric-Jan Scharlee’s answer here for the first picture and the name of the artist.

There's a pretty comprehensive (albeit short) biography of Winsor McCay here. It identifies his early work as an artist in a penny booth at a local "Dime museums" (as a caricaturist) and afterwards his work as an graphics artist for the National Printing Company of Chicago, specialising in producing handouts and posters for circuses.

He also worked as a billboard and sign painter before securing regular employment as a cartoonist and reporter for the Cincinnati Commercial Tribune. In 1903 he produced sort of experimental comic strip entitled "Tales of The Jungle Imps by Felix Fiddle" which are described as being "based on poems by George Chester"

The wikipedia article for "Dream of a Rarebit fiend" suggests his primary influences were;

Edward Lear's popular "The Book of Nonsense" (1870), Gelett Burgess' "The Burgess Nonsense Book" (1901), Lewis Carroll's "Alice's Adventures in Wonderland" (particularly the pool of tears scene, which seems related to the flood of sweat in one early Rarebit Fiend strip), and a variety of dream cartoons and illustrations that appeared in various periodicals with which McCay was likely familiar.

What was the most probable immediate influence on the strip was Welsh Rarebit Tales (1902) by Harle Oren Cummins. This collection of 15 science fiction stories were inspired, according to Cummins, by nightmares brought on by eating Welsh Rarebit and lobster—making further likely the influence, as several post-Herald strips from 1911 and 1912 were titled "Dream of a Lobster Fiend".

Not the answer you're looking for? Browse other questions tagged comics behind-the-scenes inspiration or ask your own question.

10
Was there a common influence for the characters Leela on Futurama and Aeryn on Farscape
16
Has Iain M. Banks ever cited his inspirations for the backstory of Cheradenine Zakalwe? (possible spoilers)
21
What are the sources of the imagery for the Discworld resting on the backs of the four elephants and Great A'tuin?
3
Looking for a comic with a jester, the Grim Reaper and a rose
17
What are the origin and explanation for Dax's hands-behind-the-back mannerism?
8
Was there any real-world inspiration for the DS9 episodes "Homefront" and "Paradise Lost"?
10
Looking for a French adventurer-lady graphic novel (kinda sexy and gory)
3
What are the inspirations for "The Expanse" novels?
2
Is there an MCU czar or architect for VFX and stunts?