I am looking for a story that was published in OMNI magazine in the 1970s or early 1980s. The protagonist is a fighter in an extremely bloody and violent sport. He has many body modifications to make him a more dangerous fighter. His opponents have arranged (out-of-ring) accidents for him that have left him scarred and mutilated, and a teleporter accident for his sister that has left her deformed.

He is facing his final match, and has bet on himself to lose. The opponent in the ring has been modified to look exactly like his sister, or possibly is his sister, kidnapped by the opponents' organization. In the end of the match he kills the opponent with a head blow, committing a double foul and thus losing.

The story was accompanied by an illustration of the very ugly protagonist.

I tried going through old OMNI magazines, but there are many and it is a long slog.

I think the story you are talking about is "The Fighter" by Wayne Wightman in the September 1981 issue of OMNI magazine. It has the following description of the protagonist,

Telchert Bohannon's face looked like someone had held a torch to it and melted off the details. When light hit him a certain way, his skin shone in smears of rose and blue. He had a kind of nose, two eyes, and a mouthful of normal- looking porcelain teeth, but he had no eyelashes or eyebrows or hair on his head.

And the description of his sister:

Ricky nodded her head sideways again and bumped Teichert's shoulder. She was seventeen years old. Part of her used to be his sister, before she had been scrambled in a Cinerarian-contrived jump station accident.

Finally, the protagonist describing his final opponent, an imitation of his sister Ricky,

Their surgeons had done a beautiful job. Their psychologists hadn't done badly, either. The thing was bigger than Ricky, but it was a duplicate of her, right down to the hatchwork of fine scars on the sides of her neck.

And, the illustration of the fighter you mentioned: 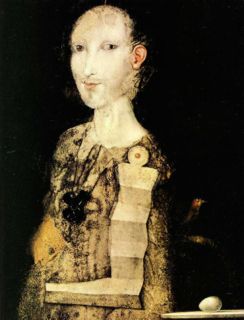 The full text is available online here on archive.org.