What type of hair was used in the construction of Chewbacca's costume in the Star Wars films? 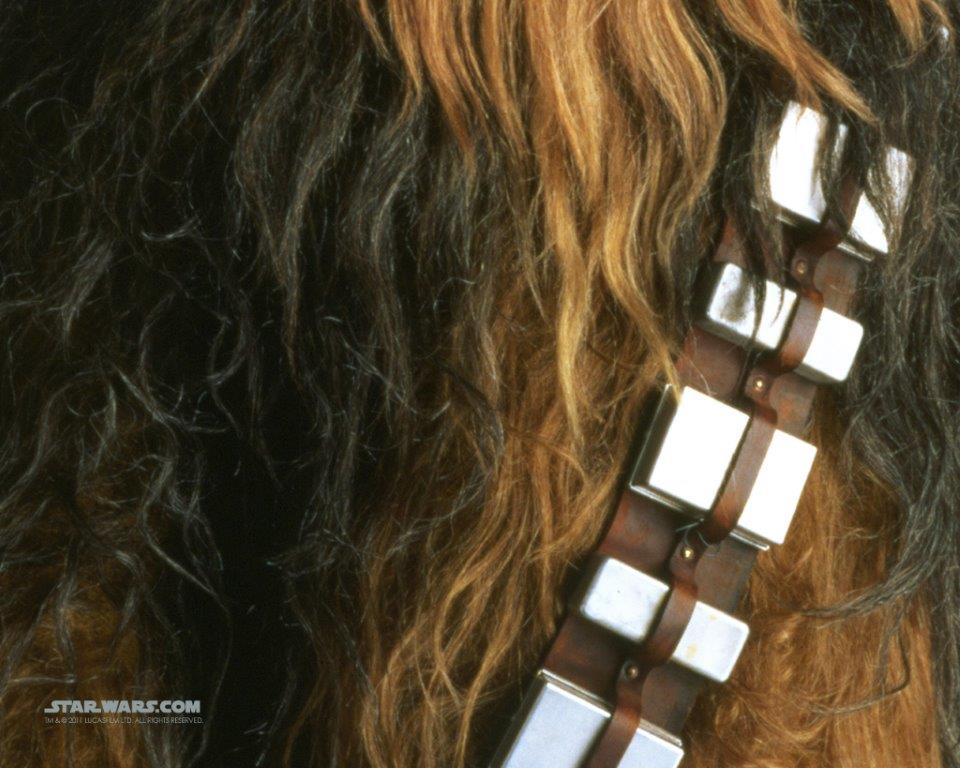 In the three original films and a holiday special, the suits were made of yak hair and mohair. For Revenge of the Sith, the suit was made of more comfortable materials, though Mayhew's filming only lasted for a day.

The factbook Star Wars Costumes: The Original Trilogy gives us considerable detail about the design and structure of the original Chewbacca suit.

The facepiece (including the entire head and neck) was painted PET with the yak hair inserted by needle, one strand at a time.

Chewbacca's mask uses a mechanism based on Freeborn's man-ape design from 2001. A rigid polyurethane skull was made to fit the performer's face, including a hinged jaw for when the actor opened his mouth. The skull translated motion through to the mask's attached foam rubber skin, which mimicked the behavior of living skin, stretching as needed. The thin, flexible skin was "art worked' or painted, and then individual strands of hair were hand-punched into it with a hypodermic needle. "I only wanted one thin layer of hair, otherwise I lose my elasticity and the movement is restricted," said Freeborn. The interior of the mask was also fitted with toggles, small plates that Mayhew could depress with his tongue. The toggles were linked to the mask's lips and allowed it to snarl. Freeborn also constructed Chewbacca's feet by adding a sculpted paw-like structure to a pair of Mayhew-sized tennis shoes.

The undersuit is knitted Angora wool and the hair is woven yak hair, separated into different clumps by colour and then knitted directly onto the wool. Additional hair was then knotted onto the wool base where the hair had come out (during use).

The "walking carpet" bodysuit was patterned and constructed at the costumier, Bermans and Nathans. New Productions department member Stephen Miles was tasked with knitting the suit. "Stephen went and bought a special machine to actually knit the initial Chewbacca costumes," recalls fellow Bennans colleague Gerald Moulin. "It was the first time they had a knitting machine," says Ron Beck. "After he [Miles] knitted the suit, it had to go to people who were like wig makers to have all the hair put in. Underneath that he [Mayhew] just wore this enormous onesie sort of thing. He used to get very hot." The knitted suit was an acceptable base, though it did not hold the hair as well as the costume team hoped. "His suit is knitted from Angora wool and knotted with yak hair," said Mollo. "It's all handmade and once, by the way, we had to thicken his hair and re-knot him because in hot weather he molted," said Mollo. "Multiple colors of long yak hair were hand tied to the elastic wool base in a specific pattern that helped bring life to the costume. George wanted it to look more like an Alsatian (German shepherd)," he adds. "So we had to work out which bits were black, which were brown, and get the pattern and proportion of the color." "We made it like pajamas, with gloves from elbows to fingers and foam rubber fingers. So if the artist needed to spend a penny [relieve themselves] they could, and then put it all back on themselves. That worked fine," said Freeborn.

In The Force Awakens, they used a wool suit for better movement and yak hair. In the face, they used some mohair to soften it up.

Since everyone wanted to hug Chewie on set, it was worn out pretty fast.