How do people at Hogwarts usually tell the time?

Classes and lessons at Hogwarts are presumably scheduled at fixed times of day. The first class might start, for example at nine in the morning.

To be on time for one's lessons, it is therefore crucial to know the current time but we know that electric watches of course do not work at Hogwarts because of all the magical interference. Are there magic watches? Is there maybe a spell to tell the time?

How do people at Hogwarts usually tell the time?

In the film adaptation, Hogwarts has an enormous Clock Tower in the centre of the main courtyard. It seems to chime on the hour and half-hour throughout the day 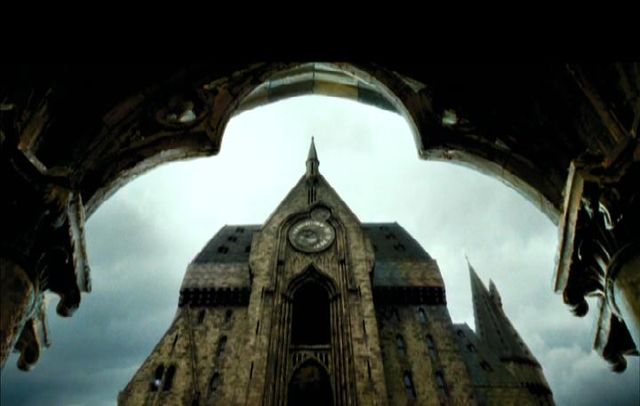 They have clocks on the walls

The following week dragged by. Wednesday night found Hermione and Harry sitting alone in the common room, long after everyone else had gone to bed. The clock on the wall had just chimed midnight when the portrait hole burst open. Ron appeared out of nowhere as he pulled off Harry’s Invisibility Cloak. He had been down at Hagrid’s hut, helping him feed Norbert, who was now eating dead rats by the crate.HP:Philosopher's Stone - Chapter 14

‘No, no, no,’ said Hermione. ‘No, we’re not. Why don’t you go to bed, Neville?’ Harry looked at the grandfather clock by the door. They couldn’t afford to waste any more time, Snape might even now be playing Fluffy to sleep. HP:Philosopher's Stone - Chapter 16

Presumably these clocks are literally clockwork, which wouldn't be affected by magic restrictions on electronics.

‘Nearly six,’ said Ron, checking his watch and then staring down the drive which led to the front gates. ‘How d’you reckon they’re coming? The train?’

Harry crept past them to the portrait hole and waited for a minute or so, keeping an eye on his watch. Then Hermione opened the Fat Lady for him from outside as they had planned. He slipped past her with a whispered ‘Thanks!’ and set off through the castle.

Hermione was tugging at his sleeve, staring at her watch. ‘We’ve got exactly ten minutes to get back down to the hospital wing without anybody seeing us – before Dumbledore locks the door’

For the record, there may be magical watches (Dumbledore seems to have one) but the rest of the characters seem to rely on mundane clocks and wristwatches, all of which seem to work fine inside Hogwarts:

Professor McGonagall pulled out a lace handkerchief and dabbed at her eyes beneath her spectacles. Dumbledore gave a great sniff as he took a golden watch from his pocket and examined it. It was a very odd watch. It had twelve hands but no numbers; instead, little planets were moving around the edge. It must have made sense to Dumbledore, though, because he put it back in his pocket and said, ‘Hagrid’s late. I suppose it was he who told you I’d be here, by the way?’

Peeves will tell you the time if you're unlucky

By the time he got up to the portrait of the Fat Lady and pulled off his Invisibility Cloak, he was not surprised to find her in a most unhelpful mood. ‘What sort of time do you call this?’ ‘I’m really sorry – I had to go out for something important –’ ‘Well, the password changed at midnight, so you’ll just have to sleep in the corridor, won’t you?’

Not the answer you're looking for? Browse other questions tagged harry-potter hogwarts technology or ask your own question.

2
How did Harry’s watch work at Hogwarts?
36
How do muggles communicate with their magical children when they're at Hogwarts?
5
Why do wizards in Harry Potter receive a watch when they turn 17?
8
Is there any canon reference to a spell that tells time?

13
How did Dumbledore know that Harry would believe Severus?
17
Why did Snape commit his halfblood nickname to writing?
9
Why did Dumbledore appoint Hagrid as professor of Care of Magical Creatures?
8
Is there any canon reference to a spell that tells time?
13
How famous was Dumbledore before 1945?
12
Where did Hogwarts store all the cauldrons?
7
Why did Professor Umbridge specifically inspect Harry's classes?