Book, probably published before the 1980s, about a pair of teenage girls (twins?) raised by dolphins and slowly integrating into society [duplicate]

I picked up a copy of this in my grandmother's house, probably 10-20 years ago. I think my mother said it belonged to my aunt Mary, who probably would have read it around the 1970s (high school / college age). The primary characters were a pair of teenage girls who had an older male professor as their guardian. I'm pretty sure the girls had long blonde hair and blue eyes. I don't remember if the girls were feral children raised by dolphins or if they were part of an experiment by the professor, but they were amazing swimmers who could hold their breath for longer than any normal human. Other than that, I just have a few scenes dancing around it my head. First, the professor kept the girls on a boat, presumably so that they could be closer to water. Second, there was a scene where one of the girls put on makeup to try to be normal, and went off on a date. Her sister observes from a hiding place. The date in question sees the sister watching and assumes that this is a sign that they're both interested and he gets more aggressive. She interprets her date's kiss as an attack and goes off of the side of the boat, leading him to think that he killed her (my vague memory is that said date might have been an assistant to the professor or he might have just been a local townsperson).

The girls might have had a psychic connection with each other, but I'm less sure about that. Unfortunately, I read this over a decade ago, and I don't think I even got to finish the book. The front cover had one of the girls on the boat and I want to say that the title talking about them as "dolphin girls". It might have been part of a series.

Very likely Daughters of the Dolphin by Roy Meyers, published in 1968. The second book in a trilogy. The first book is Dolphin Boy, John, whose mother's exposure to radiation, allowed him to live essentially as a dolphin.He is raised by a female dolphin after being accidentally tossed into the sea as an infant. There's is not enough online to get details of Daughters, but what I remember of the book, I think matches your question. 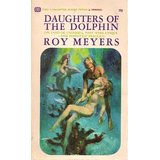 https://en.wikipedia.org/wiki/The_Music_of_Dolphins comes up in a quick google search. A bit later than your dates though seeing as it is from the mid 90's

10
Identifying a book about a girl who has the fey sight?
9
Short story about Earth freezing over and the appeal of a frostbitten dancer
15
Sci Fi action movie where an elite group of people control business through a game they play online
9
Book where a girl is left with grandmother and discovers she's a clone
17
Story of a wizard boy with 9 lives
4
Sci-fi book involving an EMP event with man in Alaska with his family back in the lower 48
8
Two sisters run into the woods. Eldest sister is captured by a witch and turned into a witch
3
A movie where two sisters get a magical dress