A couple of days ago I came across this comic strip.

It's about an alternate world where a human dresses up like a bot and tries to infiltrate a bot community or something, then he is blocked by a door that says "prove you are not a human: enter the value of pi".

You can see bots walking in pairs on the left of the comic, and the human dressed as bot fretting near the door as he can't remember all the decimals in pi, on the right side of the comic. In the next panel, you see him calling someone (probably a boss), and telling him "sorry, the mission has been compromised".

The comic is not so detailed as Marvel's. It's a simple one, though not as plain as The Oatmeal. It does not have stick figures, rather proper drawings of the characters.

I think this might be from the daily comic Commitstrip. On July 6th, 2015 they published a strip called “Meanwhile, in a parallel universe ”.

The strip is a role reversal of how CAPTCHA works and jokes about how it might be implemented from the robots perspective.

Panel 1 shows the human dressed as a robot.

Panel 2 has the pair of robots walking by on the left.

Panel 5 has a sign that ask for the input of numbers and also the call to the boss where the human explain that the mission is compromised (or as he puts it, they are screwed).

The only major difference is that he does not need all the numbers of Pi, but "only" the sum all all odd numbers of Pi between 1 and 31415. 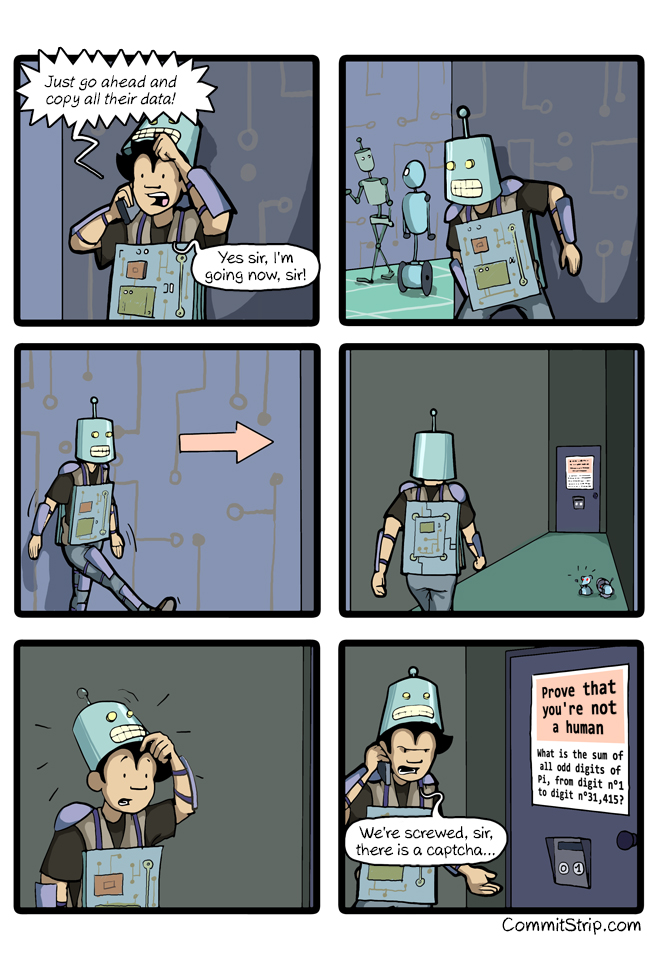 Not the answer you're looking for? Browse other questions tagged story-identification comics robots webcomics or ask your own question.

11
Looking for a short comic story about a robot trying to save a human pilot but bound by the 3 laws
5
Recent comic strip - A female PhD, her robot and a spaceship
5
Blackhawk comic book, moon base, killer robot
13
Who was the first superhero to wear a cape in comics?
6
Web comic about an adventurous dog and his human sidekick
6
Saturday Morning Breakfast Cereal comic strip about aliens
6
Comic strip: Time traveling schoolboy and Easter Island aliens