Were the flying keys charmed or transfigured?

So in the climax of The Philosopher's Stone, we see Harry and the Gang pass through some challenges to stop Quirell retrieving the stone; one of these challenges is chasing down a flying key. Conveniently, Hermione checks off the challenges and their progenitors:

“We’ve had Sprout’s, that was the Devil’s Snare – Flitwick must’ve put charms on the keys – McGonagall transfigured the chessmen to make them alive – that leaves Quirrell’s spell, and Snape’s…”

— Chapter 16, Through the Trapdoor

However, that the keys were charmed (and not transfigured) seems at odds with what we see of Charms and Transfiguration in the series. Charms are shown to change how objects behave, rather than adding to their appearance; as worded on the Harry Potter wikia:

Charms are distinguished from transfigurations in that a charm adds or changes properties of an object; it focuses on altering what the object does as opposed to what the object is.

On the other hand, Transfiguration is shown to add or transform one object into another, or change an object into a living creature.

Now, if the keys had been bewitched to float around, it would clearly be a charm. However, the keys are given wings, which, for me, blurs the line between a floating charm and a transfiguration (e.g. into a bird kind of thing). So, is there any evidence (apart from Hermione's conjecture) that giving the keys wings is an instance of charms rather than having been transfigured?

As you described, a Charm adds properties. If it requires it, the object may change its appearance by growing visible additions, such as arms, legs or indeed wings. For example, in Order of the Phoenix, Harry and Ron are shown bewitching legs onto teacups during a Charms lesson.

“Should we say something?” said Hermione in a worried voice, pressing her cheek against the Charms window [...]

He and Ron both tapped the teacups they were supposed to be charming with their wands. Harry’s spouted four very short legs that would not reach the desk and wriggled pointlessly in midair. Ron’s grew four very thin spindly legs that hoisted the cup off the desk with great difficulty, trembled for a few seconds, then folded, causing the cup to crack into two.

Harry Potter and The Order of the Phoenix, Chapter 30 Grawp

I think you're right that it blurs the line, but a Charm I think it definitely was. Flitwick also asked students to make a pineapple dance across a desk, and that may have required legs. Perhaps the distinction is that the keys and other items aren't turned into recognizable different objects.

If we go by Winged Keys

The Winged Keys, also known as Flying Keys, were keys that were presumably enchanted with a Flying Charm by Professor Filius Flitwick to guard the Philosopher's Stone.

We know from Hagrid which teachers were involved in protecting the stone.

“Well, I don’ s’pose it could hurt ter tell yeh that... let’s see... he borrowed Fluffy from me... then some o’ the teachers did enchantments... Professor Sprout — Professor Flitwick — Professor McGonagall —” he ticked them off on his fingers, “Professor Quirrell — an’ Dumbledore himself did somethin’, o’ course. Hang on, I’ve forgotten someone. Oh yeah, Professor Snape.”

Following enchantments were used to protect the stone.

“How do you know about Fluffy?” he said.

“Devil’s Snare, Devil’s Snare... what did Professor Sprout say? — it likes the dark and the damp.”

“So light a fire!” Harry choked.

Harry Potter and the Sorcerer's Stone, Chapter 16, Through the Trapdoor

Gryffindor cheers nearly raised the bewitched ceiling; the stars overhead seemed to quiver. Percy could be heard telling the other prefects, “My brother, you know! My youngest brother! Got past McGonagall’s giant chess set!”

Harry Potter and the Sorcerer's Stone, Chapter 17, The Man With Two Faces

Deals with potion, safe to assume it was Snape's idea.

A disgusting smell filled their nostrils, making both of them pull their robes up over their noses. Eyes watering, they saw, flat on the floor in front of them, a troll even larger than the one they had tackled, out cold with a bloody lump on its head.

“I’m glad we didn’t have to fight that one,” Harry whispered as they stepped carefully over one of its massive legs. “Come on, I can’t breathe.”

Harry Potter and the Sorcerer's Stone, Chapter 16, Through the Trapdoor 6. Mirror of Erised - Dumbledore

“This mirror is the key to finding the Stone,” Quirrell murmured, tapping his way around the frame. “Trust Dumbledore to come up with something like this... but he’s in London... I’ll be far away by the time he gets back...”

Harry Potter and the Sorcerer's Stone, Chapter 17, The Man With Two Faces

From the list mentioned by Hagrid, only one teachers is missing Professor Flitwick. So it makes sense for him to have created the winged keys.

The keys could have had wings before they were charmed. Seeing as Hermione went through the list of teachers and each created a challenge related to their specialty, Flitwick would have charmed the keys and not transfigured them.

Example of a key with wings: 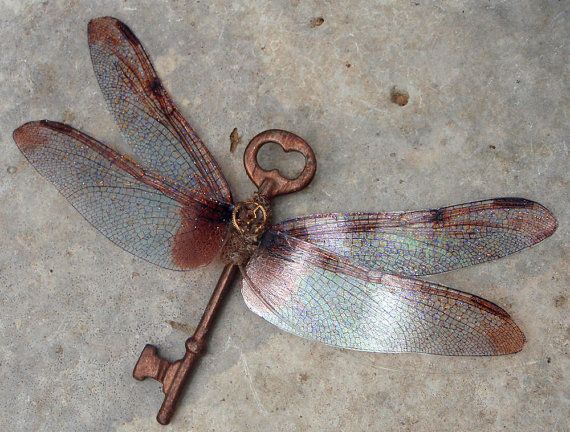 11
In what way were the chess pieces transfigured?

11
Why were the brooms kept by the flying keys in the Sorcerer's (Philosopher's) Stone?
6
What are transfigured animals essentially made of?
11
In what way were the chess pieces transfigured?
9
When was the 'last time' Hermione transfigured Ron's face?
19
Can a charmed tent in the Harry Potter universe be placed inside another charmed tent?
2
What happens inside an extension charmed object?
2
Imperius curse on transfigured humans
4
Which direction do the Winged Keys ( or Flying Keys) fly?
14
Is Hagrid's coat charmed?
3
Can objects be transfigured into live animals?