Book about a guy that gets sent to a magical place because of an experiment, becomes a wizard [duplicate]

I'm trying to remember the name of a book series where a guy was broke and signed up to be the guinea pig in an experiment that sent him to a magical land where he ended up being a wizard, an "aa" wizard.

I don't remember much else about it other than he was terrible at being a wizard but automatically was one because he was from somewhere else I guess? And all the other wizards were like "omg peasant, I can't believe I have to deal with you not knowing all this magic stuff already." He spent most of the book trying to get home to his wife.

It was from the Dragon Knight series by Gordon R. Dickson, one of which is The Dragon and the George. Thank you all for your help! Now I can read them again :)

There seem to be some similarities to Christopher Stasheff's The Warlock Unlocked, the third book in his Warlock series. Him and his family are transported to another universe, where magic actually works. Rod Gallowglass, continuously denies he is a warlock, but in this novel, actually becomes one. I believe there is a subplot of him looking for his wife. However, he's not broke and was originally sent to the planet where the 1st. book takes place as an investigator. 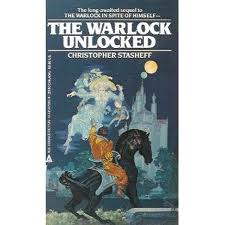 I think this is almost certainly not what you are looking for, but it sounds vaguely similar to The Magicians by Lev Grossman, which I heartily recommend in any case.

Not the answer you're looking for? Browse other questions tagged story-identification novel magic wizards teleportation or ask your own question.

15
TV episode about man who has the meanings of words change
20
I'm looking for a book series about a Queen that time travels to save her people
3
I'm looking for a book about an experiment a couple decided to do on their child to make him smarter
16
Short story collection about Transporter “Doors”
11
Fantasy novel with terrifying trees where people were sacrificed to them cocooned alive and put inside them
7
Book about killer weeds and human husbandry
15
Fantasy series - Character has epiphany on mountain
10
Fantasy story about prophetic paintings, a wizard's (ex) apprentice, and a journey under-ground through caverns in mountains