Is there behind-the-scenes information on which came first, Bender's name, function or alcoholism?

Bender's name is a nice bit of wordplay because he is a bending unit, and also alcoholic (goes on benders).

But this reference[1] in Wikipedia says he was named after the character John Bender from The Breakfast Club.

So you have a triple conjunction:

Is there behind-the-scenes information of the evolution of the development of the character? Which attributes came first?

I believe the order is:

First of all, Simpsons and Futurama creator Matt Groening conceived of the character of Bender as the "Homer Simpson" of Futurama:

GROENING: And then there's Bender. And Bender's like -- he's the standout character right now on this show. He's our robotic Homer Simpson. He's just totally corrupt -- lovably corrupt -- a la Homer. Loves his vices. I think he's the first robot in science fiction who shoplifts

The Simpsons, especially at the time, was an incredibly successful show, and therefore provided a model for projects such as Futurama. Groening wanted a Homer-esque character in Futurama — a solid move of course, considering Homer's popularity — and coming with that were vices, particularly alcohol dependency. It seems that the need to have such a character came before anything else. 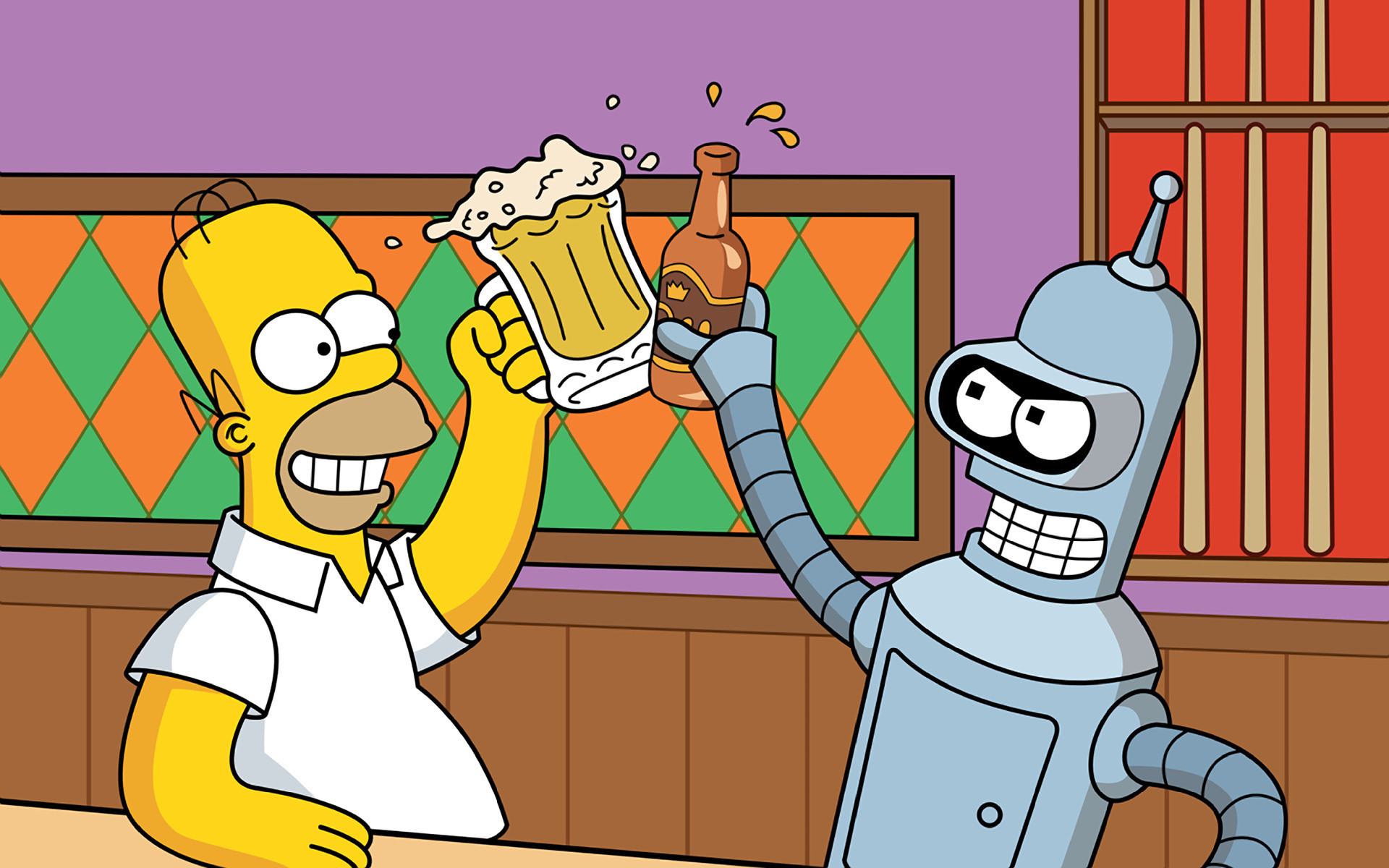 Next up, Groening is known to be a big fan of The Breakfast Club. As mentioned in the original question, the chapter "Intellectual Names" of the book Sci-Fi Baby Names: 500 Out-of-This-World Baby Names from Anakin to Zardoz cites Groening as saying that Bender's name is an homage to Breakfast Club character John Bender. The name of course makes sense given the robot's alcoholism. (Note that John Bender is also the source of Bart Simpson's familiar "Eat my shorts!" refrain.) 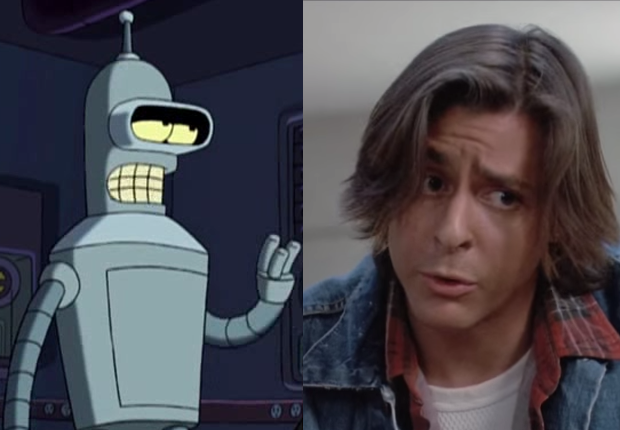 Once these attributes were in place, it was only natural to give the robot a role that fit the name: bending, specifically "Bending Unit 22".

More evidence for this order

I decided to investigate early concept art as well.

Here is a sequence of sketches by Groening that eventually led to Bender as we now know him: 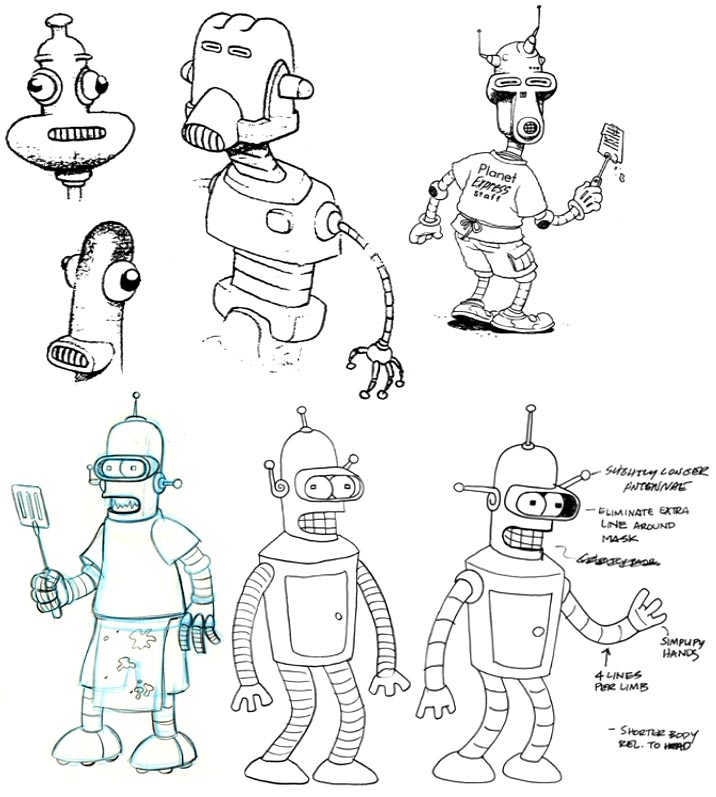 Notice that the sketches do not contain a name, whereas the analogous ones for other characters do. For example, Fry was "Fry" from the beginning: 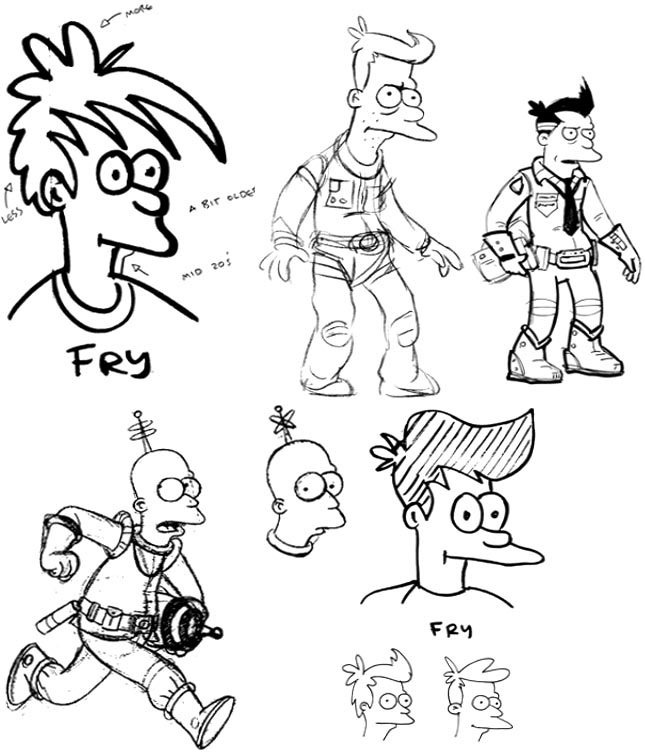 Leela's early sketches are also labelled prominently with her name.

What the Bender sketches emphasize is a Homer-esque character, particularly beginning with the bottom-left drawing of Bender as a short-order cook with Homer-like features. Given that Groening's habit of labelling his sketches as soon as he has a name for them, it seems that Bender's name and function came later.

Not the answer you're looking for? Browse other questions tagged futurama names character-development or ask your own question.

10
Which came first, the "S" or the Superman?
14
Reference for the first name of Sirius Black's mother, known from her portrait: Walburga
12
Reference for the first name of Neville Longbottom's grandmother: Augusta Longbottom
11
When do we first hear the name "Anakin"?
10
The name of the room holding the Philosopher's/Sorcerer's Stone in first Harry Potter movie/book
5
Is there any significance to the name Skywalker?
22
What's the supposed pun behind the name I.C. Wiener?
11
Thor: Which was named first, the power or the demigod?
3
What is the meaning behind Rey's name?