I have a doozy for you.

This was a late 80s/early 90s animated movie. I think it might have been a Japanese anime. I remember it featuring two alien factions at war that eventually uploaded their conscience into giant robots. It was surely to sell toys. I remember the leader of the "good" faction was a white robot that had kind of a crane like neck. Another I recall is a snake like robot with two giant wheels on either side. It took place on their world (which I think was dying) and some humans came across the planet. All the robots had cockpits and could transform into vehicle type things when the humans interacted with them. I can try to provide more details if asked.

I promise this was not a fever dream, I watched this as a kid.

Robotix is a 1985 American animated series based on the original Milton Bradley toyline of the same name featured on the Super Sunday programming block. The toyline is of the construction type that includes motors, wheels and pincers and similar to the Erector Set and K'Nex. The series follows the conflict between the peaceful, white Protectons and the warmongering, black Terrakors on the prehistoric alien world Skalorr V in an alternate universe in the distant future and two groups of humans who get caught up in it.

Imperius Argus: Emperor of the Protectons. Before his transfer into his Robotix body, he was the chief-in-command of the Protectonian imperial spacecraft city Zanadon and had a romantic relationship with Nara. He is compassionate and brave, and tries to help the humans. He despises killing to the point that he would rather hurt himself than allow anybody to use him to kill another being. He almost suffered a nervous breakdown upon discovering that his mind and life force were downloaded into his robot shell. It resembles a monster dog with a head on a long neck usable as a ramrod and a hook for a right hand that changes into a gun. Memorable transformations and features include a car-like form, a compact mode with shrunken arms and legs, laser cannons deploying from his chest and an additional K-series drone barge known as K-9. Pilot of choice: Exeter. 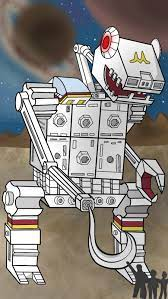 Steggor: Most cunning and serpentine Terrakor of them all, he has a rivalry with Bront. His Robotix body is a monster snake. Pilot of choice: Nomo. Steggor's relationship with him is the least cordial of all the Robotix. 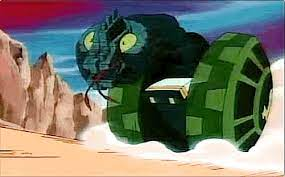 That might be the classic Challenge of the Go-bots, which actually predates Transformers by a small amount of time.

In the series' backstory, set thousands of years ago on the planet GoBotron, there lived a race of human-like beings known as GoBings. Civil war erupted on the planet when the power-hungry terrorist group known as the Renegades arose, led by a madman dubbed the "Master Renegade", who waged war against the peaceful Guardians.

When a Renegade sabotage operation inadvertently resulted in a gigantic asteroid colliding with GoBotron, the natural disasters that resulted from the asteroid's impact pushed the GoBings to the verge of extinction. However, the genius who became known as the "Last Engineer" saved his people, taking his experiments to replace parts of his own body with mechanical substitutes to the ultimate extent and transferring the GoBings brains into large robot bodies known as "GoBots".

The toys, when they transformed, tended to have more wheels and the like left over compared to the Transformers. The leader of the good faction was Leader-1, who transformed into a fighter jet, and indeed had a fairly long neck. I'm not entirely certain on the snake robot, though.

Not the answer you're looking for? Browse other questions tagged story-identification movie anime cartoon or ask your own question.

3
80s Cartoon with Robots that have Human partners unlocking abilties