Was there a one-off Spider-Man public awareness / anti-drug comic given away with chocolate pudding in the early 90s?

I seem to recall a one-off Spider-Man comic book issue or series that came out when I was much younger. This would have been between 1990 and 1992. I believe that it was actually a set of two issues, but I'm not certain.

I also seem to recall that I got the first issue for free with a pack of Jell-O chocolate pudding pots. 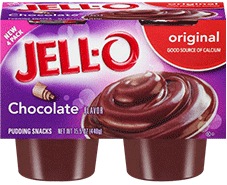 I recall being frustrated that the issue had left off on some sort of cliffhanger, which is why I think there must have been at least one other issue — although if there was, I hadn't been able to find it.

I seem to recall that there was some "moral message", perhaps anti-drug related, to the plot line which is perhaps why the first issue was being given away freely with chocolate pudding.

What was the title of this issue or series? Was it published by Marvel or was another company permitted to use Spider-Man for the purposes of this special issue / series?

Unfortunately, searches involving Spider-Man, anti-drug, and/or Jell-O do not yield what I'm looking for. Spidey seems to have featured in a number of anti-drug comics, such as the 1971 Amazing Spider-Man issue "Green Goblin Reborn!", but they are not the one I am thinking of. I'm hoping someone remembers.

Since you were in Canada at the time, it very well could be Skating on Thin Ice, the first of a five-issue series of PSA comics sponsored by Health and Welfare Canada (featuring a cover by Todd McFarlane): 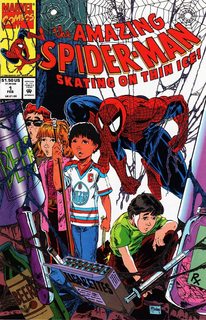 The "plot" of the series involves Spider-man busting Electro's plot to smuggle (possibly prescription) drugs into Canada1. The first issue has Spidey giving a young Winnipeg boy a "Ghost-of-Christmas-Present" tour of drug culture, and the other issues dealt with similar moral controversies, including drunk driving and bicycle safety.

ComicVine has a brief wiki summary on the series, but in general information is ahrd to come by.

Atop the Fourth Wall, a comic book critic2 video-blogger, does a "hilarious" review of the first issue that discusses the comic in more detail.

I'm not sure about the pudding cup connection; as far as I can tell this comic was handed out at elementary schools, but then there's not a great abundance of information about it online.

2 Who I think took a few too many cues from Yahtzee Croshaw, but that's just me

Not the answer you're looking for? Browse other questions tagged comics spider-man episode-identification marvel or ask your own question.

12
Which Spider-man comic series aligns closest with the 1994 animated TV series?
3
What issue is this Mary Jane monologue from?
2
How is the timeline of Marvel established amid the multiverse, reboots, etc?
8
Do the Marvel symbiotes canonically drain the life force from the user?
3
Which was the Wonder Woman and Spider-Man crossover comic book?
15
Which was the comic where a kid mistakenly called Deadpool Spider-Man?
4
Which was this comic where Spider-Man brought cookies for the Avengers?
10
Looking for the comic book where Spider-Man was [mistakenly] addressed as Super-Man
2
Can or has the Spider-Sense ever been used offensively?
6
Was there ever a film, comic, or toon where Batman had Spider-Man's (or Spider-Man-like) powers?