What is this symbol in The Legend of Zelda: Wind Waker?

I was playing Wind Waker and saw this symbol on the grandmother's door: 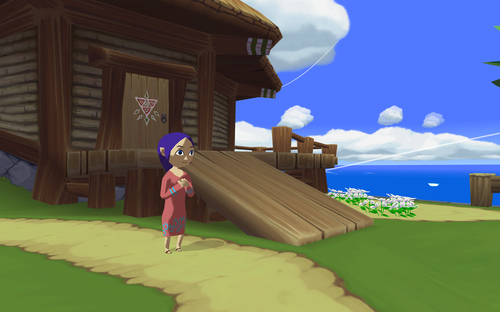 I haven't been able to find any information about it! Is this a unique symbol for this island, an alteration of another symbol, or seen in another game?

Nobody in the game points out or says anything about the symbol, so we can only speculate as to what it means to them. To the player, though, it has a very clear meaning—something so obvious and straightforward that it's easy to miss.

The introduction to Wind Waker retells the story of Ocarina of Time:

(Although the story is very similar to many other Zeldas, we can tell this describes Ocarina of Time because the boy clad in green is called the "Hero of Time.")

The story isn't presented as a historical text, but as a legend. It's not clear that the narrator even believes that the story is true! Everything is stated in mythic, archetypical terms. The Triforce is depicted in the illustrations and referred to in the text, but, like Link and Ganon, it isn't mentioned by name.

The end of the introduction says that "On a certain island, it became customary to garb boys in green when they came of age," placing the narration of the tale in the context of the Great Sea culture where Wind Waker takes place. For the people of Outset Island, then, the story of the Golden Goddesses, the Hero of Time, and the Triforce is all much more distant and uncertain than it is for those of us who played Ocarina of Time. They may or may not believe the ancient myths are true; they may or may not remember them at all!

The symbol on Grandma's door is an inverted Triforce. As Toomai Glittershine says in the Wikipedia Talk page that Andrea Jens linked to, it's probably "a result of the garbling of legends."

(It's a little bit like the Eye of Providence on the US $1 bill: Everyone knows it's old, and everyone knows it means something, but a random person on the street probably has only a vague idea of what that is.)

To Grandma, it might be a symbol of the same tradition that celebrates the Hero of Time, or it might mean absolutely nothing. But to the player it means:

"These people don't even know which way the Triforce is supposed to point!"

The symbol is a small detail that reinforces how far in the past the Hyrule of Ocarina of Time is from the Great Sea.

There was a thread around on GameFAQs on the same topic and even one in a discussion page of Wikipedia, but as far as it goes, it looks like it is only an upside-down re-design of the canonical triforce symbol without any hidden meaning ;)

Sorry, reality could be much more boring than expected, sometimes :D

As other have noticed (see Ryan answer) the symbol does indeed seem to be a sort of "garbled up" Triforce symbol, which does indeed fit the rest of the setting of the game.
After all, the story takes place in a flooded Hyrule, where most of it inhabitants have long lost any memory of the old world and legends from the past.

That would't be the only instance of a miss-remembered reference to the Triforce either. Later in the game, the player has to reassemble the lost pieces of the Triforce of Courage. During that quest, it is possible to get some hints from the local fishman. The one near Outset Island says this:

I heard that beneath the big-head boulder on top of the hill here on Outset is where the greatest treasures of all, the golden Triumph Forks, are buried. But actually, fry, I must have misheard or something... 'Cause this one guy told me that what was actually buried beneath that weird rock was a chart to this shard of something called a Triforce. Whoever heard of that? That's crazy! there's a big difference between 'Triumph Forks' and 'Triforce'! I mean, I think someone intentionally buried something misleading there.

That said, there is something more interesting about that symbol being specifically placed on the door to Grandma's House: that is also the house where you get your first shield. The shield design is not just a random one or a village specific one (see the Ordon shield in Twilight Princess for example) - it is an actual "replica" of the traditional Hylian Shield design. Notice that even in this incarnation the shield still has the Triforce symbol but the recurrent Crimson Loftwing / Goddess Crest underside it is replaced by a similar but yet different creature. 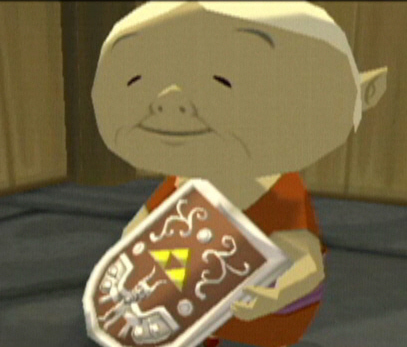 In the olden days, this was the day boys were finally considered to be men. They were taught the ways of the sword to prepare them for battle with their enemies. Hanging the family shield on the wall as decoration is another tradition that has been carried down from those days.

And when you are given the shield, you get this other line:

You got the Hero's Shield! This is the legendary shield said to have been used by the hero himself!

While the second quote could just be interpreted as "same design", the first one seems to leave little space to guessing. The shield is indeed a family heirloom, passed on thru the ages. The similarities with the Hylian Shield may suggest that Wind Waker "Link" is once again related to the same bloodline of past ones. If that is the case, the symbol of the door is probably just one more family tradition that has somehow been garbled up by the passing of time.

Not the answer you're looking for? Browse other questions tagged symbols the-legend-of-zelda or ask your own question.