80's movie about a man who finds a robotic arm which eventually turns him into a cyborg?

I remember seeing this movie as a child so the details are very sketchy. He finds a robotic arm which I think is discarded at a dump and it eventually turns him into an evil cyborg.

A green-skinned man wanders through the desert with a laser cannon attached to his arm. A spaceship lands and two aliens emerge, one of whom shoots the man, which disintegrates his body. The aliens depart on their spaceship, leaving behind the laser cannon and a metallic pendant the man was wearing.

Teenager Billy Duncan wakes up in his bed, seemingly disturbed, and learns his mother is leaving for vacation. He goes to visit his girlfriend Kathy, but her deranged grandfather Colonel Farley makes him leave before he can see her. As Billy drives around town, he is harassed by bullies Chuck Boran and Froggy, and by two police deputies who give him a speeding ticket. Billy wanders into the desert and discovers the laser cannon and pendant. He starts playing with the cannon, pretending to shoot things, then realizes he can fire the weapon while wearing the pendant. Meanwhile, on the alien spacecraft, the two aliens converse with their leader who shows them footage of Billy using the cannon, prompting the aliens to turn their ship around to head back to Earth. Context implies that the two aliens, upon departing Earth, left the cannon and pendant behind under the presumption that no other human would be able to use them as the green-skinned man had, but they have now learned that they were in error.

Billy and Kathy attend a pool party where Chuck and Froggy attempt to rape Kathy. When Billy discovers them, a fight breaks out but Kathy stops it; knowing Chuck and Froggy would outmatch Billy. Later that night, Billy uses the laser cannon to explode Chuck's car, and Chuck and Froggy barely escape the explosion alive. Government official Tony Craig arrives to investigate both the explosion and the desert where Billy found the cannon. Tony informs the local sheriff that the town must be sealed off.

Feeling sick due to an unusual growth on his body, Billy visits Dr. Mellon, who surgically removes a metallic disc from Billy's chest. Mellon calls the police laboratory technician Mike London to arrange for the disc to be investigated. A green-skinned Billy opens fire on Mellon's car that evening, killing him in an explosion. The next day, Tony investigates the wreckage and recovers unusual material, which he brings to Mike London, who concludes it is an alien material that cannot be destroyed.

At night, the green-skinned Billy takes his revenge out on the two police deputies for interrogating him about Dr. Mellon's death and kills both of them at a gas station. The next day, Kathy puts the pendant on Billy's chest while they are laying together outside. Billy immediately wakes up with green skin and deformed teeth and attacks Kathy, but she escapes. Law enforcement officials shoot at Billy from an aircraft, but Billy destroys the aircraft with the cannon, and later kills Chuck and Froggy by blowing up their car.

While Tony questions Colonel Farley and Kathy about Billy, the two aliens land on Earth and begin searching for Billy. After killing a man and stealing his van, Billy travels into a city and goes on a rampage, shooting random objects with the laser cannon and fires at his surroundings. Kathy and Tony arrive in the city and locate Billy, as the aliens spot Billy from atop a building and shoot him, which kills Billy and destroys the laser cannon. The aliens depart in their spacecraft and Kathy cries over Billy's corpse. 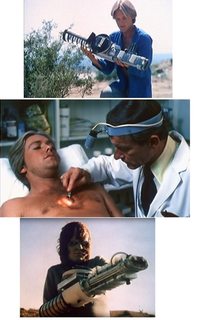 13
A TV Movie where a guy turns into a cyborg?
4
What movie features a boy in a wheelchair who eventually becomes a cyborg?

13
A TV Movie where a guy turns into a cyborg?
13
Cartoon movie where the main character had a robotic arm
8
Which movie/TV show has an evil cyborg harvesting eyes from androids in a hidden town?
3
What 1980s american sci-fi horror movie has a female cyborg villain with a flamethrower arm or breast as a weapon?
6
Late 50's movie episode about a man who finds a pair of old glasses that enable him to read others thoughts
2
Anime about guy with a unique robotic arm
9
Villian who falls into acid and turns into a reptile thing; the hero fights him on a train (?)
2
Cyborg movie from the 80s where the protagonist dies in a plane crash and is made into a cyborg
2
Anime where a boy gets a white beam blasted at his arm which eventually turns him into a white alien creature