Would the Moon in Terra Nova really have appeared so much closer?

In Terra Nova episode 2 they show this image of the Moon: 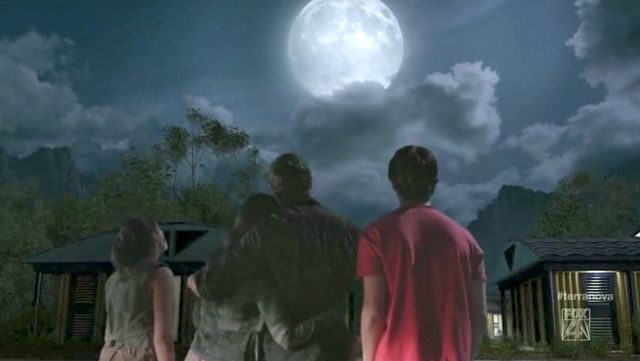 They mention that being 85,000,000 years in the past the Moon is much closer to the Earth, citing that every year it moves half a centimeter away from the Earth. I was curious just how much this equated to, and if it could really cause the Moon to appear so much closer. Thus, with this information the Moon would have been approximately 42,500,000 centimeters closer during this period. This equates to 264.08 miles closer. The moon is currently 238,900 miles away from the Earth. Thus, 264.08 is .11% of this distance. So for example, if we are talking about a mile this would only be 5.8 feet. So would such a small relative distance really have made the moon appear so much closer?

No; assuming that Maddy (I think that's who said it) has her facts right, their moon wouldn't be anywhere near that much bigger 85 million years ago. In fact, it would be in practically the exact same spot as it was in their present day.

Our moon is moving away from the Earth, right now, by about an inch and a half a year (about 3.5 cm). If Terra Nova's moon really did movie only .5 cm / year, then it's moving much slower than ours by a factor of about 1/7.

At the rate their moon is moving, 85,000,000 years ago it would have been approximately 425 km closer to us, which would be something like 0.08% closer. (Yes, that's eight hundreths of a percent closer). With that little change, the moon would barely look a tenth of a percent bigger.

We don't know what else might be "different" about Terra Nova's moon, but our moon's elliptical orbit causes it's distance to fluctuate about 43,000 km every month, and we barely notice the difference. It's almost certain that Terra Nova's moon would look exactly the same 85 million years in the past as it did in present day.

For a more thorough analysis, you can also read the Bad Astronomy review of Terra Nova here.

Not the answer you're looking for? Browse other questions tagged terra-nova or ask your own question.

21
How does Terra Nova send messages to the future?
10
Why isn't the portal terminus inside the Terra Nova colony?
5
How was the new batch of people transported to Terra Nova after destination time increment?
3
Can anyone get any information on the cliffhanger in Terra Nova involving the wooden prow?
4
Were there any novels ever written in the Terra Nova TV series setting?