Who is the woman in the first scene of Ant-Man?

In the first scene of Ant-Man,

Hank Pym storms into a room where there are three people: Mitchell Carson, Howard Stark, and a woman.

Who is the woman?

Here’s a screen cap from the opening scene: 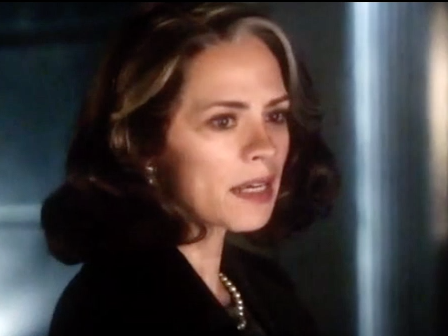 The actress is Hayley Atwell (albeit with heavy makeup to give the impression of age). She’s shown up a few times in the MCU, including Captain America: The First Avenger and Agent Carter.

In Agent Carter, we see her involved with the SSR, which eventually becomes SHIELD. This includes working with Howard Stark, who’s with her in the early Triskelion. As such, it’s not surprising that we’d see her in a meeting of senior SHIELD members.

Peggy Carter; although aged from the first Captain America movie.

Not the answer you're looking for? Browse other questions tagged marvel marvel-cinematic-universe character-identification ant-man ant-man-2015 or ask your own question.

14
What did Ant-Man steal from the Avengers?
12
What are the differences between Ant-Man and The Atom?
6
How does quantum Ant-Man keep his structure?
31
How did Ant Man breathe when he shrank down to sub-atomic level?
18
How can Ant-Man ride Anthony?
8
Does S.H.I.E.L.D. know who Ant-Man is?
18
Why was Scott Lang chosen as Ant-Man over Hank Pym and Eric O'Grady
19
How can Hank shrink without his Ant-Man suit?
10
What happened to the Cross Particles stolen by Mitch Carson?