What's the first movie in which an alien says “We come in peace”?

It occurred to me after yesterday's movie night that The Day The Earth Stood Still (1951) is the earliest movie I know of where the alien actually says this.

Are there any older movies that also used some variation of "We come in peace"?

For clarity's sake: I'm after science fiction movies in which an alien comes to Earth and, ideally, the very first thing they say to humanity is a variation of this phrase, since that's the trope I most often see parodied in modern works.

It's The Day the Earth Stood Still

After quite a bit of investigation, I can find no instance of an alien uttering this particular phrase (or a variation of it) in any science fiction film prior to 1951's The Day the Earth Stood Still. Of course, it does appear in both fictional and non-fictional works before 1951, but not in the desired context.

I have subsequently concluded that The Day the Earth Stood Still is the first science fiction film in which a variation of the phrase "we come in peace" is spoken by an alien to a human in a first-contact scenario. 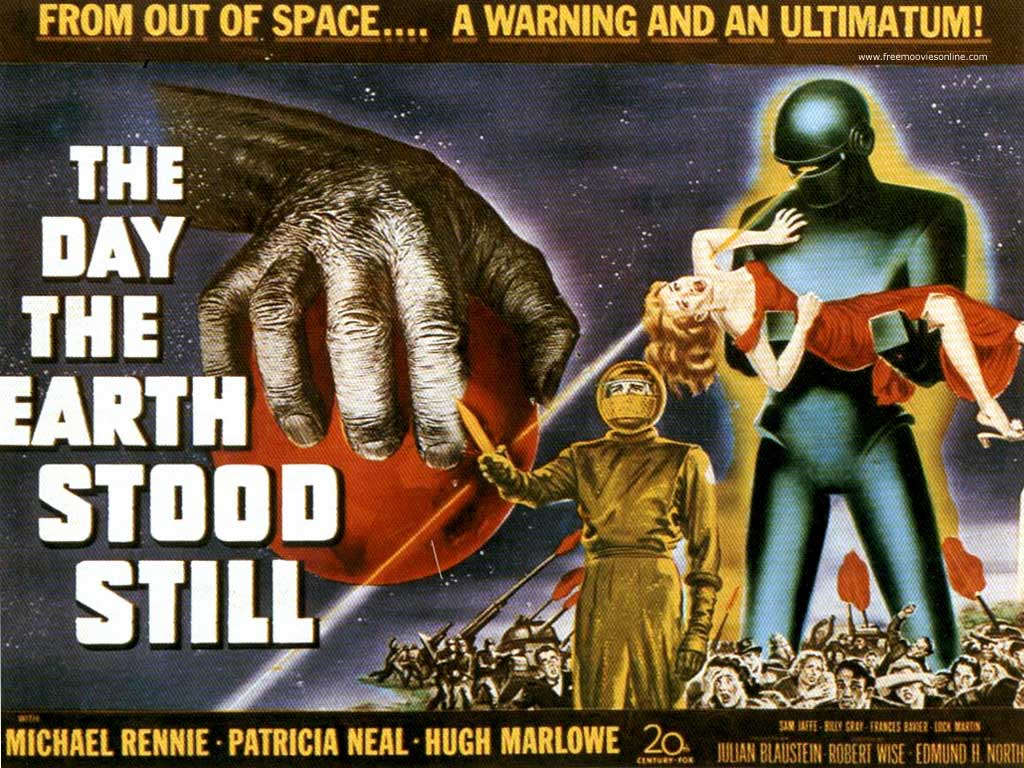 The following article makes for some interesting reading on the different types of first contact presented in early 1950s sci-fi films:

Referring to The Day the Earth Stood Still, the article proclaims:

So simple, so archetypal, that it would become the basis for many a future sci-fi film...

In particular, it seems to be the origin of the pervasive "we come in peace" trope in science fiction cinema.

Not the answer you're looking for? Browse other questions tagged history-of quotes first-contact or ask your own question.

5
Which Sci-Fi work was the first to depict “Multi-Alien Culture”?
12
What is the first instance of teleportation using a machine (aka transporter) in Sci-Fi movies or TV?
16
Who wrote the first SF story in which a time-traveler went back to the days of the dinosaurs?
11
Quote by Science Fiction writer: peace and prosperity are the exception, not the norm
14
What was the first science fiction story that showed a successful alien conquest of the Earth?
28
What was the first published SF story to use the surprise twist “and these characters were the original Adam and Eve!” at the end?
57
When was the first time that a science fiction story mentioned the concept of a “prison planet”?
10
Which SFF movie or TV series first showed Hitler?
27
What work originated the term “dark lord” as a conventionalized title for a preternatural overlord?