Why did Dave's head get erased before his body?

We all remember the scene where Marty is playing the guitar and then starts to have difficulty as his hand fades. That got me to thinking: the photograph of the three kids showed that certain parts of them would fade rather than them fading a a whole generally. 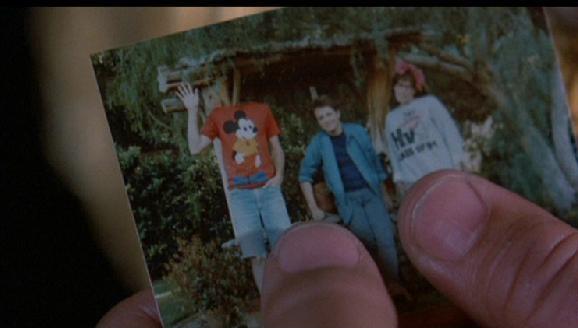 You will note in the above photograph that Dave's head fades.

My question then is as the chance of Loraine and George getting married and having kids faded (pun intended), why did their children in the photograph not fade as a whole - why did some parts fade before others?

Disambiguation: I am not asking why Marty was the last child to fade. I am asking about why the McFly children began to fade out body-part by body-part, not the order in which the individual children disappear. Without further details, the answer to that other question cannot fully address what I am inquiring about!

In your earlier question,

Why was Marty the last child to fade out?

It seems that the changes in the timeline cascade forward, affecting temporally displaced facts in order of how far removed they are from the moment of distortion. Marty faded last because his birthday is the furthest away.

Now consider this helpful information on fetal development from the Mayo Clinic. Organs begin to form at Week 5, in a particular order:

Fetal development three weeks after conception The fifth week of pregnancy, or the third week after conception, marks the beginning of the embryonic period. This is when the baby's brain, spinal cord, heart and other organs begin to form.

Basic facial features will begin to appear, including passageways that will make up the inner ears and arches that will contribute to the jaw. Your baby's body begins to take on a C-shaped curvature. Small buds will soon become arms and legs.

Seven weeks into your pregnancy, or five weeks after conception, your baby's brain and face are rapidly developing. Tiny nostrils become visible, and the eye lenses begin to form. The arm buds that sprouted last week now take on the shape of paddles.

Applying the logic of the accepted answer for the question referenced above to Dave's head disappearing first, it could very well be that organs and body parts disappear in the order of "how far removed they are from the moment of distortion".

The heart is one of the first organs to appear, and so it may have actually disappeared before the head! The brain and arm buds / "paddle" hands form next, which could be why Dave's head disappears before the rest of his body and why Marty's hands start to disappear while he plays the guitar.

That's because George (or Loraine) marrying someone else would not prevent him having ANY children, but just having THAT specific child.

Say George married "Mary". He could still have three children, but they would not be the same, because they are a combination of the parents' DNA: it would be impossible for George and Mary's child to look like Dave.

Think of the picture of the tombstone: when events change the tombstone doesn't disappear, just the inscription, because it was still possible that it would be used for someone. As soon as this is determined the picture changes again.

Marty is a weird case, because he starts disappearing from the hands instead of the head. Maybe he inherited the aspect from George, but took the music talent from his mom...

12
Why was Marty the last child to fade out?

6
Why does Marty McFly Jr look exactly like his father?
25
Why did Doc Brown choose the Delorean DMC-12 as his first time traveling vehicle?
24
Where did Doc get his money collection from?
9
Why does Doc Brown have an enormous amplifier in his house?
9
Where did Marty hit his head?
19
How did Doc get into the DeLorean?
15
Why did Doc build the Time Train?
4
How did the band get Marty out of the trunk of the car?