Title of a fantasy movie with girl in red armour

I remember bits and pieces of a strange fairytailish movie I saw as a child. Couldn't get it out of my mind ever since. I remember at the beginning that there was a king and a queen who had a daughter, then a pack of talking wolves appears on a winter night and give them another baby girl.

Maybe they said something about a prophecy; I don't know. The two girls grew up together, one nice, the other evil. I remember the evil one talked to a crow or something? And there's a scene were she tries to mess with the pies her sister baked and another where someone gets a pie thrown at their head. I also remember that when they grow up, the evil sister steals(?) her sister's lover. There's a part where the evil sister blasts the talking wolves to dust and another where the good princess is disguised in red knight's armour that she takes off to fight her evil sister. Maybe there was a joust near the end of the film.

I've looked all over for this, but didn't come up with anything.

Desideria eventually ends up in the desert, where she is saved from the Witches of the Sand by none other than Prince Victor himself. She learns from him and other rebels in his camp that her beloved father is actually a cruel and vicious ruler. Just as she agrees to fight at Victor's side, Selvaggia casts a spell from the castle, causing Victor to fall in love with her and rush to join the tournament to win Selvaggia's hand.

(Also, I found a Russian-dubbed version on Youtube. The king finds the child in a wolves' den, there's younger sister messing with elder sister's pie, and a crow telling the younger sister that she must become queen.) 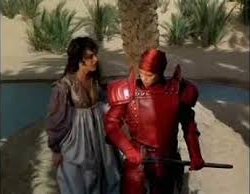 Not the answer you're looking for? Browse other questions tagged story-identification movie fairy-tales or ask your own question.

23
Fantasy book filled with short disturbing stories
11
Fantasy novel with amnesiac witch, impotent soldier and cursed animals
6
Identify fantasy story with magical boy, girl who marries a prince who is assassinated
7
Trying to identify a high fantasy movie on the SyFy channel, two women accidentally bewitch men?
10
Cartoon about a boy who could transform into a big blue bird and speak to animals
11
80s/90s fantasy book: female protagonist, demon-related magic, “knife”/“blade” in title…?
11
Fantasy Story About A Boy And Girl That Enter A Fantasy World Pre-1994