Why didn't Tony Stark ask Thor to charge his suit with lightning?

In The Avengers/Avengers Assemble (2012), during the clash between Thor and Iron Man after Thor removes Loki from SHIELD custody, Thor hits Iron Man with lightning, charging his suit.

Thor, kneeling on the ground, pulls Mjölnir to his hand, raises it to the skies and pulls in LIGHTING and THUNDER! Thor points the hammer at IRON MAN and the outpouring of bolts lighting increases in intensity. IRON MAN falls back.

IRON MAN FIRES AWAY FROM HIS HAND BOOSTERS, pushing Thor to his knees. Like two gunslingers ready to draw, both Thor and IRON MAN fly towards each other and meet in the middle and ascend up.

Later, during Battle of New York, Iron Man ends up putting himself in danger when his suit begins to run out of power.

Why didn't Iron Man just ask Thor to send some lightning to charge up his suit?

Because it didn't just charge him, it damaged him

Re-watch that fight in the forest. The lightning super-charged the suit, but it also messed him up. His HUD was filled with static, his joints were sparking, and he seemed to have some trouble moving properly before he discharged the energy back at Thor. He even seemed to be flinching, as though he was getting shocked within the suit itself. 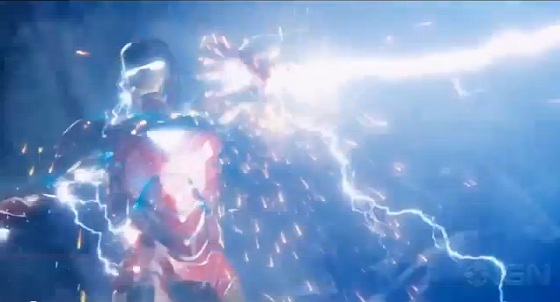 It wasn't a pleasant, or a safe, experience, and there's no real reason to think his suit's survival would be guaranteed. It could have been a fluke, and a second attempt could have disabled him, or worse.

Also, remember: JARVIS pegged Thor's blast as shooting him up to 400% charge. That's not just a top-off, that's dangerous. Tony was able to think quickly and blast the energy back at him, but it's probable that if he hadn't, it would have damaged him further. I imagine that in those few seconds, JARVIS was working double-time at the fuses and power sinks throughout the suit to buy Tony time.

...your point is well-taken: Tony's suits post-Avengers might do well to incorporate a lightning rod for quick recharging, since Thor basically serves as an infinite, mobile battery. But for the events of the first Avengers movie, it's clear that Tony's suits aren't capable of handling that kind of power surge.

In universe - Because the risk was too high.

The only time when the battery life on the Iron Man armour becomes an issue during the battle of New York is when JARVIS alerts Tony that they don't have enough power to get back through the portal once they have sent the nuclear missile through it.

At this stage, Tony Stark can do one of several things;

Although the final option puts Tony in the most danger, it is also the only one that guarantees the nuclear missile will not destroy New York. As such, it is the option that Tony Stark takes, saving the lives of millions of people and ending the battle in one fell swoop.

Out of universe - For character development.

Earlier on in The Avengers/Avengers Assemble, a heated arguement between Steve Rogers and Tony Stark occurs, with Steve saying;

I've seen the footage. The only thing you really fight for is yourself. You're not the guy to make the sacrifice play, to lay down on a wire and let the other guy crawl over you.

To which Tony responds;

I think I would just cut the wire.

This is a clear example of Tony's style of thinking - that there is always another way out, a way for everyone to win.

Naturally, he later finds himself in a situation where he cannot just "cut the wire", and instead has to make the sacrifice play - in this instance, putting himself in harms way by flying the nuclear missile into the portal.

Not the answer you're looking for? Browse other questions tagged marvel-cinematic-universe avengers marvel the-avengers-2012 or ask your own question.

27
Is Thor more than an Asgardian?

33
Why didn't Loki's staff work on Tony Stark?
26
Can Iron Man recharge his suit from lightning?
37
Why does Ultron hate Tony Stark?
10
Is the film line up of The Avengers taken from the comics?
4
In The Avengers (2012), How did they communicate at the climax without any ear device even though the inner ear technology was created in 2013?
6
Could Thor use Mjölnir to pin Hulk to the ground?
2
Is Aldrich Killian stronger than Thor?
3
Could Cap have gotten​ Thor's armour too?