What, if any, locking mechanism do the doors have on the Enterprise?

In TOS: Space Seed, Khan manages to force open a door that's been "locked from the outside" with only his bare hands. 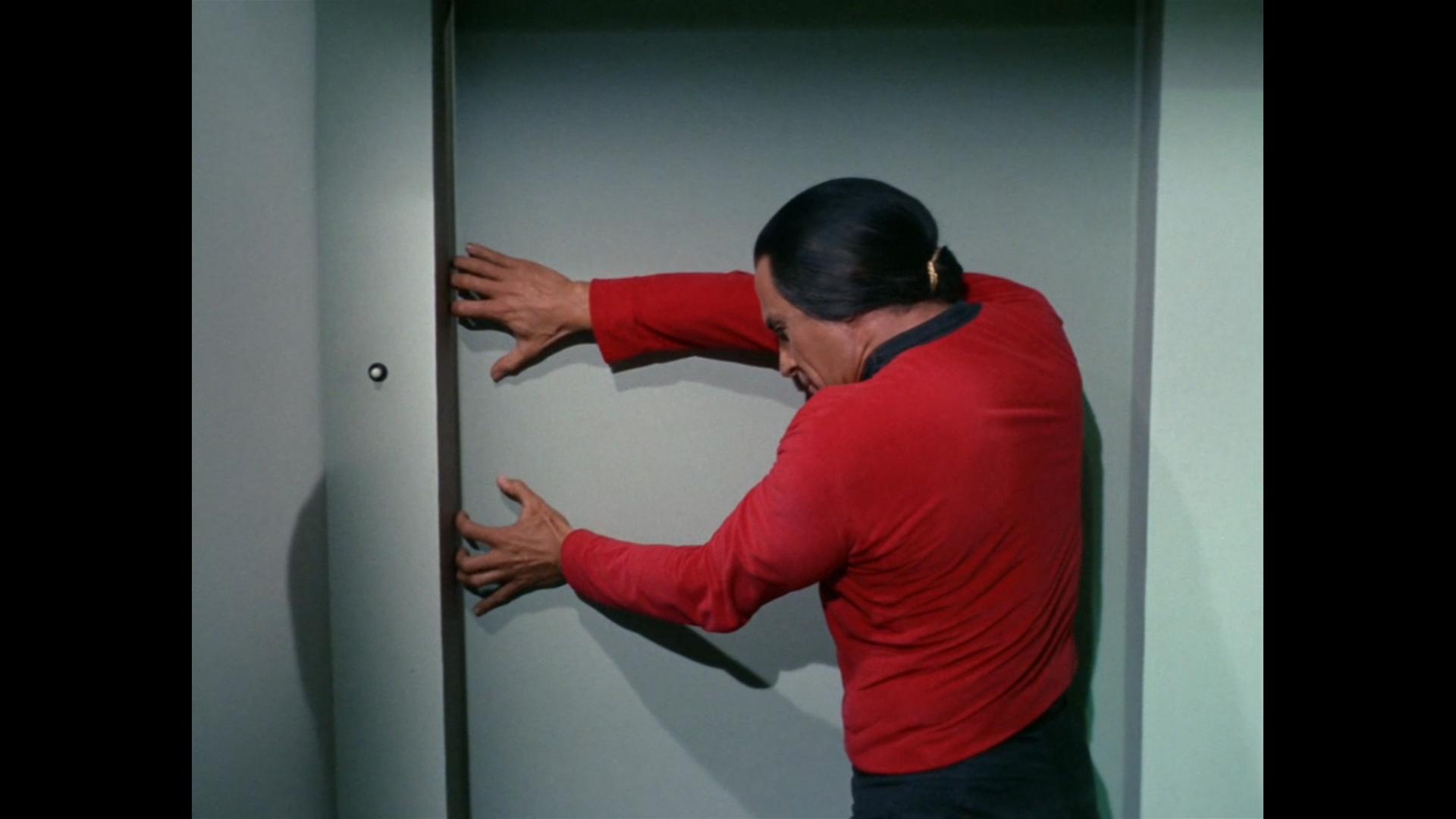 Although he is "five times" stronger than a regular human, the door doesn't seem to put up much of a fight, so it got me wondering: What if any locking mechanism do the doors have on the Enterprise? Even a simple deadbolt would've made a loud noise when Khan broke it, and we've seen forcefields used in the brig, but it seems like this door was simply "turned off".

I'll take answers for any Enterprise, not just the TOS one, since it's entirely possible I'm overthinking this and they simply hadn't fleshed out the universe to the level of door locking mechanisms at the time this episode aired. But I would assume at least one of the Technical Manuals has something to say about doors.

I would surmise that there are no "locks" whatsoever, but only states in which the hydraulics are meant to open the door or not open the door. I believe this is what is referred to as the "locking mechanism" in episodes and in the Star Trek: The Next Generation Technical Manual; that is, just an unresponsiveness of the hydraulic/magnetic door-sliding mechanism.

Under normal circumstances for a door leading to an unrestricted part of the ship, the motion sensor would trigger the hydraulic mechanism, sliding open the door for a nearby crew member walking up to it.

For doors to restricted areas or during unusual circumstances (a part of the ship must be quarantined or access must be restricted temporarily to a critical system because of an intruder), the hydraulics would simply not respond to an individual's presence.

I posit that Khan was simply fighting against the hydraulic mechanism — and won.

Also, as you point out, we do not hear the sound of something breaking or snapping, which is further evidence that there is no physical "lock".

Dredging up a question from "Related" to provide more data.

Here we can see that the door panels themselves have no mechanisms of any kind: 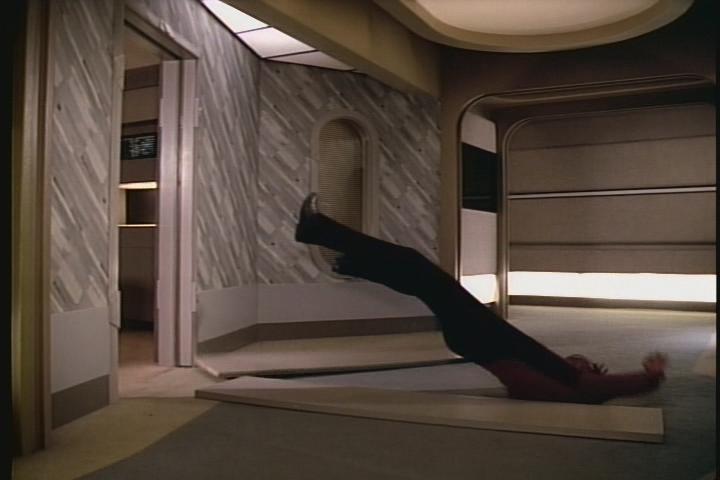 Geordi is thrown through the pocket doors which reveal themselves as simple panels, either made of wood or plastic (maybe metal). All the mechanisms for operating the doors appear to be in the walls.

There's no equivalent shot of the doors from TOS, but various close up shots fail to show any sort of door hardware.

The locks were as the accepted answer said; the computer refusing to move the doors. If you wanted to pry them open, you had to use manual force.

Now, the doors to the Holodeck doors (and sometimes Cargo Bay doors) imply a locking mechanism: 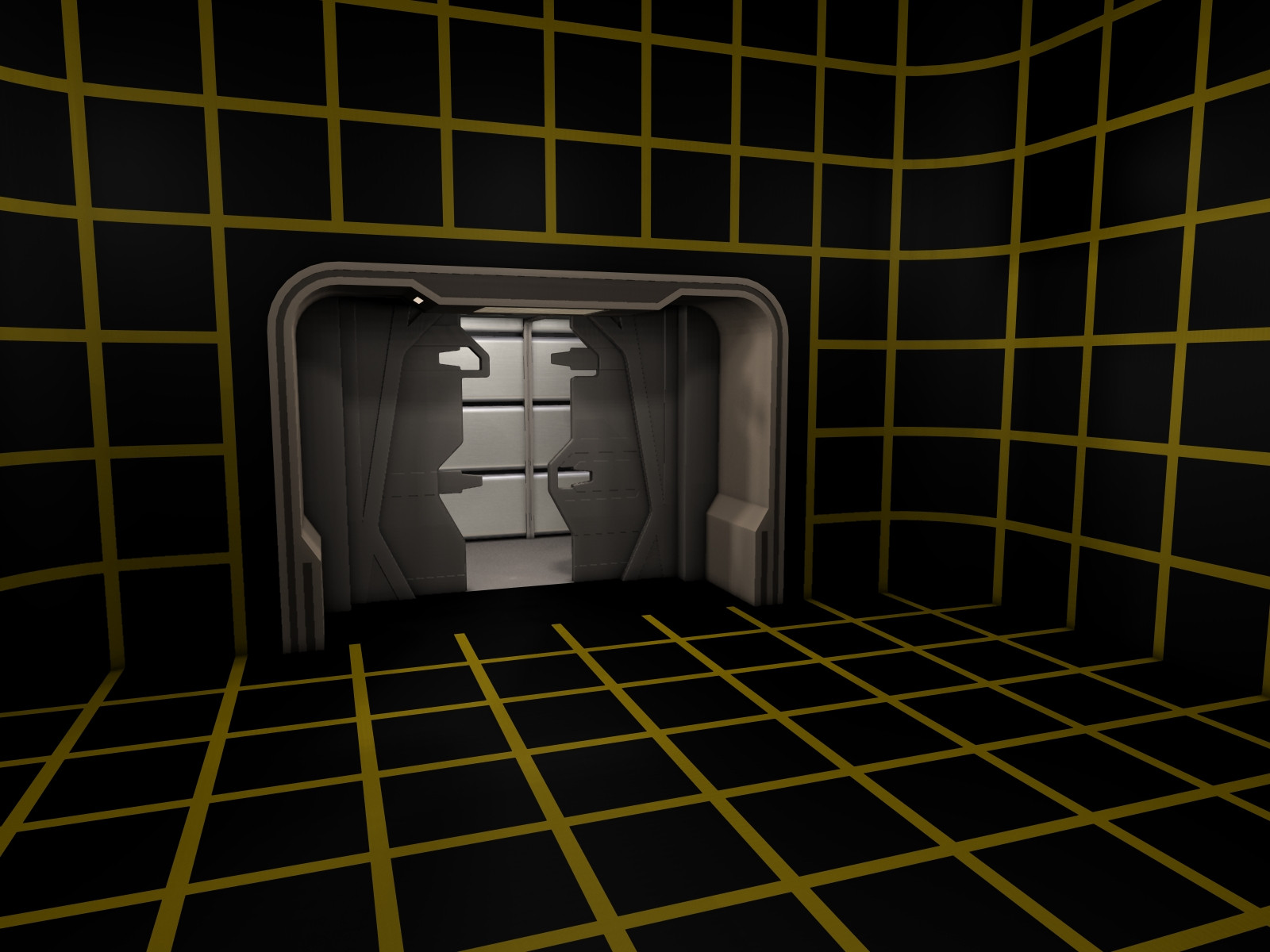 But even those show no hardware, so maybe the extra bits are mostly designed to survive the type of impacts we saw in the first picture.

When Starfleeters need a door to absolutely, positively stay closed, they (1) lock the door with the computer, so it refuses open commands, (2) disable the manual release mechanism, so that the intruder can't just pump the door open, and (3) put up a security field or increase the structural integrity field on the door.

It seems to be a lot of extra effort to install SIF and security field emitters on all the doors, but it makes sense in the Trek universe; a physical, mechanical lock doesn't put up much resistance in a world of transporters and phasers that can vaporize just about anything. Physical doors are for privacy and basic protection against an unmotivated intruder (like a chain or bar lock; enough to avoid unintentional intrusions and signal privacy, but not enough to stop somebody truly motivated to enter.)

I don't believe the doors are operated hydraulically, I believe they are moved magnetically, like a maglev train. Much more reliable (no moving parts, except the door itself), probably faster than hydraulics, and takes up less space too.

I would guess there are electromagnets in the walls along the edge where the door slides out, which when activated pin the door to the wall.

8
What governs the actions of the Enterprise's doors?