I am trying to remember the title/author/editor of a book I had as a kid. It was a collection of short stories about aliens. The cover had a one eyed green alien reaching through the bars of a cage.

One of the stories was about two kids who discover ancient cave drawings that depict horrible aliens living on Earth, and then a space ship of humans coming and destroying them, implying that humans are the real aliens.

Another story I remember have kids travelling through tubes to an alien zoo. One of the kids (I think he was the antagonist) chucks an ice cream cone at the caged alien...who eventually escapes and enacts his revenge.

I think there is another one where people are sleepwalking through town to some sort of spaceship...it turns out to be a garbage disposal unit? I'm Not sure. I remember in that story the alien was explaining to the captive human what was happening to the humans that were sleepwalking, "We don't have a word for it, I think your word is "garbage disposal".

One of the short stories had "Fayetteville" in the title. Like "What happened in Fayetteville" or something like that. I remember this specifically because when I discovered that there really were cities by the name of Fayetteville in the US I was petrified!

I don't believe it was a Bruce Coville collection, I've looked through the chapters of those and none of them look familiar. I feel like it was a scholastic publication...but that's just because I think I purchased it from the scholastic book catalog.

This is driving me nuts, I've been looking for about a year...perusing the young adult section of used book stores and emailing librarians.

For some reason I keep thinking the title is similar to the "more scary stories"-esque anthologies.

Can someone help me find it?

You're looking for this book: Aliens: Extraterresterial Tales of Terror by Don Wulffson.

It came in two different covers, one with a cyclops, and one with a goblin-thing. 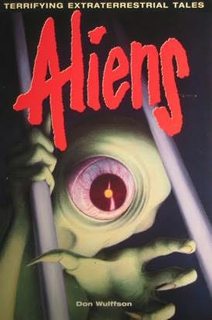 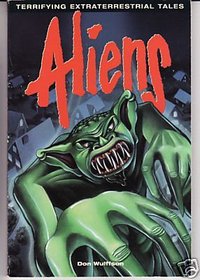 The "garbage disposal" story is "The Dastasian Invasion" and comes right before "The Killer of Fayetville". "Alien Ancestors" is the one about the cave paintings. And the zoo one is "An Eye for an Eye"

You can search SF story titles on the Internet Speculative Fiction Database. There is a single story whose title contains “Fayetteville”: “A Snapshot from Fayetteville” by Mick Collins (1993). ISFDB only lists this story as published in anthologies of furry fiction, and the Locus Index attributes the story to FURthest North Crew. You can read a review on SFsite. This is the right time frame for this story, but looks like the wrong genre, and I can find no mention of this story's inclusion in another collection that looks like what you describe.

The book is titled "Aliens", however, it is nearly impossible to find it online. I have searched for a very long time, but to no avail.

12
Collection of sci-fi/fantasy short stories: tiny aliens crashlanding in a backyard on Earth, growing a star as a school project, and some Le Guin
8
Looking for '80s(?) short story where humans defeat aliens using the orbs the aliens carry to enter their bases
10
Short Story about aliens outlawing cars
9
A collection of short stories about various currently existing cities set in a dystopian future
6
Sci-fi anthology for kids of alien stories - aliens lure humans into a garbage disposal and put them in zoos
11
Trying to find a Sci-Fi Short story about aliens converting to Judaism
8
Collection of sci-fi short stories for younger readers