What fantasy film or TV show first depicted a sentient automobile? What kind was it?

Which film or TV show first depicted a sentient automobile? I can think of three that could qualify, Herbie, Chitty Chitty Bang Bang and my mother the car. I know there are likely others that predate them. Which film or show was the first to feature a sentient car and what kind was it?

The earliest I've been able to find is a 1937 Merrie Melodies short called "Streamlined Greta Green." A forerunner of Pixar's Cars, the short is set in a city inhabited by both anthropomorphic cars and regular humans. You can watch the entire (8 minute) cartoon on Daily Motion.

If you want to limit to film or TV, I'm inclined to suggest The Twilight Zone; at least two early episodes include autonomous cars.

The earliest is "A Thing About Machines", which aired in October 1960. The episode focuses on a man whose appliances begin exacting their revenge for mistreatment; he is ultimately killed by his car. From Wikipedia:

A repairman has paid a house call to Bartlett Finchley, who is having trouble with the TV, and notes that he should not damage his appliances (he smashed the screen of the TV for a mild inconvenience).

Finchley runs from the house and is chased by his driverless car (a 1939 Lagonda coupe). The car chases him to his pool and pushes him in. 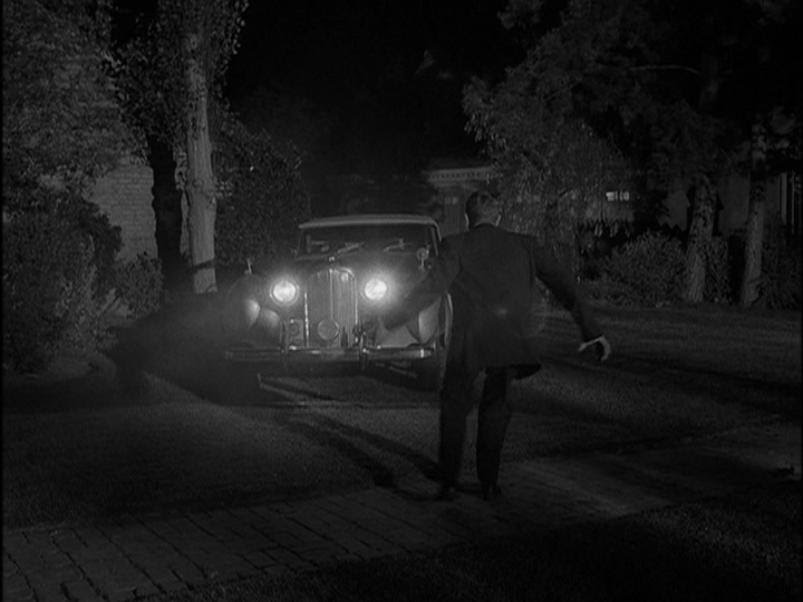 If that doesn't strike you as sentient, I also have the January 1964 episode "You Drive". In this episode, the car involved in a hit-and-run starts acting up, forcing its owner to confess to the crime:

Oliver ("Ollie") Pope is in a hurry. The nervous and distracted man's mind is not on his driving, and as a result, he slams his 1956 Ford Fairlane two-door sedan into Timmy Danbers, a young boy delivering newspapers on a bicycle, injuring him seriously enough that the boy eventually dies of his injuries. Pope stops, but then, instead of offering aid, hurries off, trying to conceal his part in the accident. His wife, Lillian, and his co-workers notice that he is increasingly irritable. A co-worker, Pete Radcliff, is inaccurately identified by a witness and Pope does everything to foment that erroneous suspicion.

Before long, the vehicle seems to take on a mind of its own. The vehicle itself rebels against its owner: at first, when Ollie Pope is near the car, it honks its horn, flashes its lights, attempts to start on its own, drops its bumper, tries to close its hood on him, and repeats the radio newsflash of the boy's death in an attempt to get Ollie's attention. Then, while his wife is driving the car, it drives to the scene of the accident and stalls out, seemingly determined to get Pope to admit his guilt. Eventually as Pope starts walking to work so the car is not seen by police, the car leaves Pope's garage on its own, chases him down the street in a rain storm and seems to be about to run him down. It stops just before doing this and the passenger door opens; Pope gets in and the car then drives him to the police station, where he walks in to confess.

Not the first, but in 1965 there was the TV show My Mother the Car, with Jerry Van Dyke. Ann Southern voiced his mother who had reincarnated as a 1928 Porter automobile.

Not the answer you're looking for? Browse other questions tagged story-identification movie tv origins sentience or ask your own question.

12
Which science fiction TV show was the first to be adapted to the big screen?
14
When did the first back-in-time Time-Traveling Robot appear in literature?
7
Film or book trilogy about sentient weapons
12
Black&white TV show about fantasy mansion
10
What show am I remembering about aliens taking over Earth?
7
Old children's film or tv special where man has a magic bucket of paint?
13
Fantasy film where dwarfs are turned to stone, and then used as bowling pins at a regal party
3
Late 90s or early 00s fantasy show about a girl in a fantasy place with muppet type monsters
2
TV show with a small trouble-making protagonist with wings and a pet