What's the relationship among the many uses of the name “Praxis” in sci-fi?

Besides being the name of the Klingon moon destroyed in Star Trek: The Undiscovered Country, there are at least five other uses of the name in sci-fi or gaming citation

How are these uses related?

Background:
In the comments to this question,
Who wrote "Ode to Spot" and Data's other poem?
@Praxis questioned why I hadn't accepted his answer yet and it was suggested that that it would move him to poetry when I did. Well, this is my penance. In doing the research to compose the response, and racking my brain over where to post it without being off-topic, I actually discovered there is an interesting question. Surely there is no prohibition over asking an interesting question and choosing to answer in the form of a poem.

So, without further ado:

"Ode to @Praxis" by @ThePopMachine

Praxis, oh, Praxis is a word of many meanings
The internet has many sites to help me with their gleanings.

To start, it is a noun, which Wikipedia informs
Means the process by which a theory or idea takes a form.

I've also learnt that Praxis is a school of ideology
Specifically it's one of the Marxist genealogy.

In Netherlands, I've read to reinstate your house's splendor,
Maybe you should journey to the Praxis Doe-Het-Zelf Center

Many links are red, so therefore I am left to wonder:
Are all the Praxis genus moths endemic to Down Under?

Now, looking more at sci-fi, on the Sanctuary series
Praxis lent its name a subterranean-type city

In Robinson's Mars trilogy, the Praxis Corporation
is a metanat so large that it wields power over nations.

The Klingon moon of Praxis is a place you dare not visit.
Well, book your shuttle soon before you find that it now isn't.

I'm not surprised that Lucas stole its planet death effect.
(I also think that sci-fi scribes are partial to the X.)

In the eponymic novel written by John Walter Williams,
The Praxis is the credo of a race who've enslaved humans.

And lastly there's the user, to whom all should genuflect
For on scifi.SE, we know: @Praxis makes perfect.

Praxis recurs in many sci-fi contexts.

There appear to be a few reasons.

(1) Its meaning of 'putting theory into practice' is just vague but specific enough to be applied to almost any thing or idea. It's like "the method" or if named your philosophy The Philosophy. So since sci-fi deals with ideas, and lofty scenarios with entities that apply those ideas, it's easy to apply this term.

(2)The Praxis School of Marxist philosophy originated in the 1960s, so may have informed many SF writers during their schooling or afterwards.

(3) It has a futuristic, retro, or cool feel because of the X and the 'is/us' suffix (Ex. Locutus, Optimus Prime, Crosis).

In some respects, nexus is a very similar word. It has a similar morphology and its meaning is just general yet specific enough (a connection linking two or more things; a central and most important point or place) to recur many times in sci-fi and gaming.

In Sanctuary, Praxis "is a vast metropolis built with materials and technology far in advance of anything available on the surface .. founded some eight thousand years ago by humans of "great and extraordinary intelligence" ". So both (1) and (3) apply.

In the Mars trilogy, "Praxis Corporation paves a new way of 'democratic businesses' " and therefore is the embodiment of a new theory. So similarly, (1) and (3) apply.

In Star Trek: The Undiscovered Country, Praxis is a moon of the Klingon homeworld Q'onos used for energy production. While one may argue that there could be ties to (1), Memory Alpha suggests that the connection is through (2):

The explosion of Praxis is loosely based on the Chernobyl disaster, one of several factors leading to the breakdown of the Soviet Union. (Captains' Logs: The Unauthorized Complete Trek Voyages, pp. 137-138) Likewise, the word "Praxis" is employed in the writings of Karl Marx, meaning active rather than merely theoretical socialism.

This having been said, it doesn't seem this the name Praxis for the moon is intended in universe to carry the meaning of praxis. It wouldn't make sense for the Klingon moon to have a name in English that means anything, and it doesn't appear the the name Praxis is intended to be the translation of a Klingon word. While the word doesn't seem particularly Klingon to our modern ears after all the Klingon development in Star Trek: The Next Genetration and Deep Space Nine, it appears to be case of (3). The fact that the name Worf, which also originates in Star Trek: The Undiscovered Country, doesn't seem particularly Klingon by modern standards lends credence to the assertion that Worf and Praxis are both just intended to be normal Klingon names before the whole Klingon morphology and phonology became more developed.

Interestingly the effect of depicting a three-dimensional explosion with an expanding 2D ring originates in Star Trek: The Undiscovered Country(1991) and is known as the Praxis effect. It enjoyed fairly common use over the next few years, in popular sci-fi films. This includes 1994's Stargate, 1996's Independence Day, the 1997 DVD Special Editions of Star Wars Episode IV: A New Hope and Star Wars Episode VI: Return of the Jedi, and 1998's Armageddon 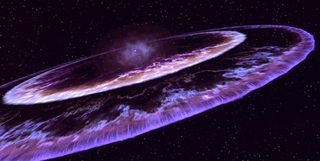 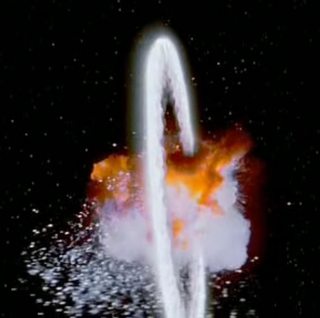 (Related: What inspired the Praxis effect?)

In the 2002 novel The Praxis, the Praxis is the philosophy based "on total obedience and hierarchy" of the Shaa, "a powerful race that have ruled the Empire for thousands of years, having subjugated humans and other races." So this is an instance of (1). It is also likely that (3) applies, because the novel contains an insectoid race, the Naxids, which one will note also have similar morphology to Praxis, therefore suggesting the futuristic quality of both words was a factor.

So, to summarize, based on evidence found so far, there does not appear to be any connection among the various sci-fi uses of the name Praxis, except via the original meaning of the word and its sounds, which both make it attractive to sci-fi writers.

However, the scifi.stackexcange.com user @Praxis does appear to be named after the Klingon moon Praxis. His 1st, 2nd, 6th, 7th, 10th, and 11th most commonly used tags (and 18 of his top 52) are related to Star Trek. Furthermore, his avatar picture is shared with the Memory Alpha page on the moon Praxis 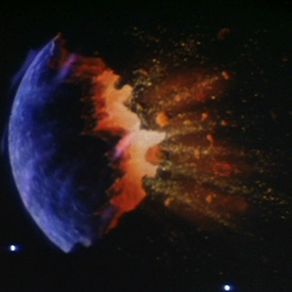 Praxis is a German word (hence its use by Karl Marx) with several meanings, all of which make it a good word for the examples above. Here are some of the German uses;

Arztpraxis; the location where a doctor or a group of doctors ply their business. empfohlene Praxis; the recommended way of doing something Praxisjahr; on-the-job training, internship for one year

(Not normally used for practicing something, that is Uebung.)

As said above, Kim Stanley Robinson used it in the Mars books, one example of Robinson actually getting German right. And it is a natty word with an x in the middle.

Edit: In the book it is first introduced as the name of a Swiss organisation

Not the answer you're looking for? Browse other questions tagged history-of names praxis or ask your own question.

25
Is it 'Noonien' or 'Noonian' Soong?
26
What's the relationship among the many uses of the name “Galen” in sci-fi?
21
Who wrote “Ode to Spot” and Data's other poem?
10
What inspired the Praxis effect?

10
What inspired the Praxis effect?
16
What destroyed Praxis in Star Trek Into Darkness?
68
Which Sci-fi universe uses the most forms of FTL (Faster Than Light)?
12
What's the relationship between Ensign Janeway and Capt. Janeway?
28
What's the history of the term “starship”?
18
Where did the name “Gallifrey” come from?
7
What is the explanation or justification for this Vulcanesque Klingon name in Star Trek: Discovery?
26
What's the relationship among the many uses of the name “Galen” in sci-fi?
38
Why is the name “Rigel”, and especially “Rigel VII”, used in multiple universes?