A dystopian fiction novel written by George Orwell in 1949, it describes the world of the year 1984 as a nightmarish authoritarian state where "Big Brother" is always watching.

Nineteen-Eighty-Four is a fiction novel written by George Orwell in 1949, on which a film was later based starring John Hurt as the main character.

It describes the world of the year 1984 as a brutal and nightmarish authoritarian state where everyone is under constant surveillance for the subtlest hints of subversive behavior, and all are kept in abject poverty by means of perpetual wartime rationing. The elite Inner Party of the English Socialist Party ("Ingsoc"), led by Big Brother, manipulates history itself with a small army of propagandists who eliminate references to inconvenient facts. Propaganda posters stating "Big Brother is Watching" are everywhere. 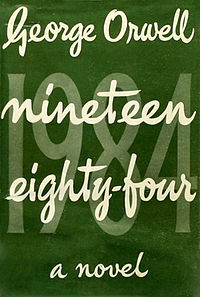 Why does the Party allow playing chess in Orwell's 1984?

Why does the Party care to inform the people about the current war situation?

What was the ultimate objective of The Party in 1984?

Is Big Brother an actual person in the novel 1984?