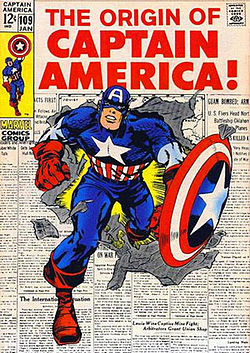 Captain America is a superhero appearing in the marvel-comics universe. The character first appeared in Captain America Comics #1 (March 1941), from Marvel Comics' 1940s predecessor, Timely Comics, and was created by Joe Simon and Jack Kirby. By 2007, an estimated 210 million copies of "Captain America" comic books had been sold in 75 countries.

For nearly all of the character's publication history, Captain America was the alter ego of Steve Rogers, a frail young man who was enhanced to the peak of human perfection by an experimental serum in order to aid the United States war effort against Nazi Germany. Captain America wears a costume bearing an American flag motif, and is armed with an indestructible shield that can be thrown as a weapon.

An intentionally patriotic creation who was often depicted fighting the Axis powers of World War II, Captain America was Timely Comics' most popular character during the wartime period. After the war ended, the character's popularity waned and he disappeared by the 1950s aside from an ill-fated revival in 1953. Captain America was reintroduced during the Silver Age of comics when he was revived from suspended animation by the superhero team the Avengers in The Avengers #4 (March 1964). Since then, Captain America has often led the team, as well as starring in his own series.

Always use in conjunction with the marvel tag.

Why does Captain America need to exercise?