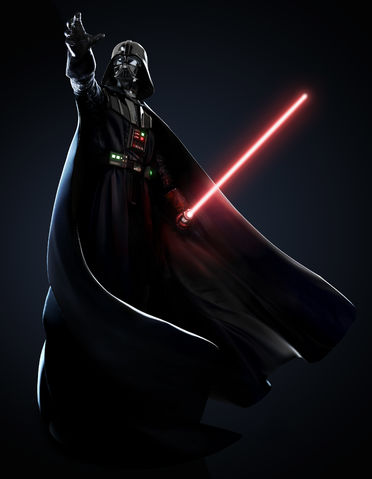 Darth Vader is the primary antagonist in the original Star Wars films. After a battle with his former master he was badly damaged by lava; Vader is seen in a black, armoured life-support suit. As a master of the dark side of the Force, Vader became the scourge of the Jedi, continuing the Great Jedi Purge which would last until the year 1 BBY. Supreme Commander of the Imperial Fleet and an extension of Emperor Palpatine's will, the Dark Lord was constantly on the move, travelling throughout the galaxy to defeat rebel uprisings or arrest corrupt Imperials.

In Episode III: Revenge of the Sith and Episode V: The Empire Strikes Back, it is revealed that Darth Vader was once the

Jedi Knight Anakin Skywalker and, with Padmé Amidala, he fathered the twins Luke Skywalker and Princess Leia. In Episode VI: Return of the Jedi, Vader redeems himself, dying as a Jedi Knight having killed Emperor Palpatine in order to save the life of his son, Luke. For questions about Darth Vader in Episodes I-III, in other words questions about Anakin Skywalker, use anakin-skywalker.

Darth Vader's iconic status has made the character a synonym for evil in popular culture; psychiatrists have even considered him as a useful example to explain borderline personality disorder to medical students.

Sources: Darth Vader on the Wookieepedia and the English Wikipedia.

Since when has Darth Vader had a sense of humor?

How did Vader saving Luke turn him to the good side?

Why was Darth Vader so careless?

Is there a story behind the misquote, "Luke, I am your father"?