For questions about Deadpool, a comic book mercenary and anti-hero created by Marvel Comics. Use this tag to refer to both the comic and movie franchise. For the first movie use [deadpool-2016]. Always use in conjunction with the [marvel] tag.

Deadpool ("the Merc with a Mouth") originally started off as a villain and he became very popular due to his talkative nature and tendency to break the fourth wall with humorous effect, such as, Deadpool knows he's in a comic book and frequently comments on it.

Wade Wilson was an international assassin who had worked for various governments when he developed an aggressive cancer. In an effort to find a cure, he enrolled in the Weapon X program in Canada, which gave him a healing factor from another member and set him to work for them. When he killed a team member, he was thrown out of the program and was sent to have his abilities removed, where he was experimented on instead. The results of his stay there were a diminished mental state, a healing factor that could not cure his cancer or heal his scars, an infatuation with death, and his freedom to return to for-hire mercenary work. As "The Merc with a Mouth" he set out as Deadpool to kill and have a good time doing it. Deadpool was created by Fabian Nicieza and Rob Liefeld, first appearing in New Mutants #98. (1991)

Deadpool rarely plays by any rules (and is one of the few people in the Marvel universe who carries, and copiously uses, guns). He's not afraid to kill people for even trivial things and is often known to break the Fourth wall. 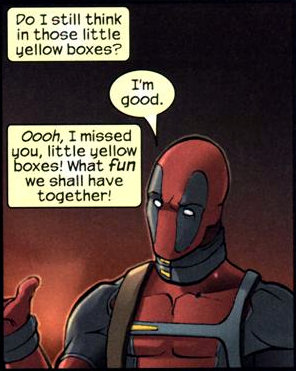 In which Deadpool comic does he kill over liking Star Wars prequels?

Who are these people at Deadpool's wedding?

Why does Ajax keep asking Deadpool to say his name?