Spider-Man is a Marvel Comics superhero. The character was created by writer-editor Stan Lee and writer-artist Steve Ditko. He first appeared in Amazing Fantasy #15 (August 1962). Many variations of Spider-Man have been created over the years, but this tag should be used for all of them with very few exceptions. Use the tag miles-morales for Miles Morales questions. 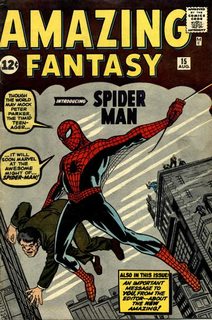 Lee and Ditko conceived of the character as an orphan named Peter Parker being raised by his Aunt May and Uncle Ben, and as a teenager, having to deal with the normal struggles of adolescence in addition to those of a costumed crime fighter. Spider-Man's creators gave him super strength and agility, the ability to cling to most surfaces, shoot spider-webs using devices of his own invention which he called "web-shooters", and react to danger quickly with his "spider-sense", enabling him to combat his foes.

When Spider-Man first appeared in the early 1960s, teenagers in superhero comic books were usually relegated to the role of sidekick to the protagonist. The Spider-Man series broke ground by featuring Peter Parker, a teenage high school student and person behind Spider-Man's secret identity to whose "self-obsessions with rejection, inadequacy, and loneliness" young readers could relate. Unlike previous teen heroes such as Bucky and Robin, Spider-Man did not benefit from being the protégé of any adult superhero mentors like captain-america and batman, and thus had to learn for himself that "with great power there must also come great responsibility" — a line included in a text box in the final panel of the first Spider-Man story, but later retroactively attributed to his guardian, the late Uncle Ben.

Source: Spider-Man on the English Wikipedia.

Why did Peter Parker work as a poor photographer given that he was a top science student who could earn much more in Silicon Valley?

How was Spider-Man persuaded to join the side he did?