I believe I read this in the 90s as a hardback book while living in Kentucky. There was a family with at least two boys and one girl. They acquired some electronics equipment secondhand (I think from a friend who was getting rid of it) and they pull a prank where they expose the girl to the loudspeaker at a horribly high volume. It temporarily deafens the girl (she eventually gets her hearing back) but while deaf, she finds that she can hear thoughts.

There's another plotline that happens where the kids have to raise money to save something... a patch of land, I want to say. They scheme to make use of the girl's telepathy to cheat in a spelling contest by having someone else looking up the words and relaying the spelling to her, and they succeed in winning, getting just enough money to save the land, but didn't account for taxes. There's a brief discussion of donating money to charity to drop to a lower tax bracket, but they quickly realize that that would ultimately lead them to have less money than when they started. Fortunately, the child of a rich man has come up lost, and he's offering a reward, so they again use the girl's ability to read thoughts (I want to say that they unearth the speaker to boost her abilities, albeit at some degree of pain from the girl) and they find the child in an upended pipe on a construction site, possibly the site that they were trying to save.

The book had simple black-and-white line-drawings inside it for illustration. I remember one of the girl getting blasted by the loudspeaker, one of her brother sitting in a chair with a dictionary in his lap, and one where they were rescuing the child from a pipe. I think that it was one of the books where her gifts faded as her hearing returned to normal, returning her to normal, but it was hinted that they never quite went away entirely.

Could this be The Trouble with Jenny's Ear? 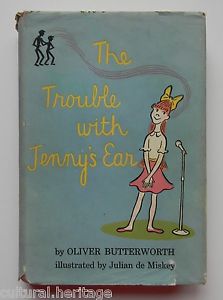 The Pearsons of Pearson's Corner, a Massachusetts hamlet, are introduced to the era of electronics by the energetic experiments of their two young sons.

Some tampering with one of these experiments has a strange and unpredictable result: Jenny, the small daughter of the family, discovers that she can hear people's thoughts. The three Pearson children and the adults— Mr. and Mrs. Pearson and Uncle Harold—suddenly find themselves confronted with an extraordinary situation, and their reactions to it are all somewhat unusual.

The Pearsons' predicaments are common problems of everyday life, though considerably exaggerated. Because of electronic bugging and because the daughter can read everyone's thoughts, privacy becomes an issue that the family must resolve. When it appears that the pristine hill next door may soon become a teeming housing development, the family must reassess the importance of their living space.

Just in this short summary, we have

According to this link, she enters a spelling bee.

Not the answer you're looking for? Browse other questions tagged story-identification young-adult telepathy or ask your own question.

11
Young Girl Fantasy Series (I think?)
5
Young adult book about a girl pulled through a mirror by her soulmate
3
Story Identification: Novel about a girl and her mother who survive by walking through people's dreams
10
Book where a boy and girl are transported into a fantasy video game
8
Fantasy book with a brother-sister pair in a besieged castle. Girl can shapeshift. Boy gets turned into a sword
5
Book about family with wings, and the protagonist has to learn how to fly(?)
6
Young teen girl is immortal
6
Kids Book series - Girl babysits a family of monsters
9
Intelligent, talking zombies caused by dark water; one zombie kills another zombie