What is the population of Panem at the start of The Hunger Games series?

The square's quite large, but not enough to hold District 12's population of about eight thousand.

This is reinforced later when Katniss revisits District 12:

More than ninety percent of the district's population is dead. The remaining 800 or so are refugees in District 13.

And we know that District 4 has a population of 111,453 (taken from a link in Himarm's answer to one of my other questions): 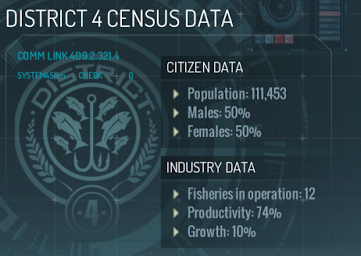 But I was unable to find any information on the other districts' populations, or the Capitol's population. I tried using the Internet Archive to get at the census data from the other districts on the Lions Gate Hunger Games website (http://www.thecapitol.pn/), but had no luck.

Is there enough canon information to get a proper population estimate of Panem (the Capitol and Districts 1-12) at the time of the Reaping for the 74th Hunger Games?

Someone has gone to a fair bit of trouble to work out this figure here, and their argument certainly sounds convincing. This is a fairly long answer, but I didn't snip anything as the argument is impressive in its level of attention to detail.

The book implies that the development of civilization is not much different than the present day world because the devastating effects of the wars and natural disasters counteracted any progress that was made over the decades. Therefore Centives will use the contemporary world as a basis for several assumptions.

The first thing we know is that after the catastrophes that lead to the end of civilization as we know it, the population of North America is substantially lower than it is today. We also know that each of the districts specialize in some unit of production. Here’s the list:

The first thing that is evident at once is that District 12 is the only district dedicated to producing a form of power. Therefore, we can predict, based on Panem’s need for power, about how many people reside in the country. The first thing to consider is how many of the residents actually work in the coal mines. We know that district 12 has about 8,000 citizens. It is also understood that the population is generally young. Katniss mentions that, in District 12, so many people die young that living old enough to have grey hair is something worthy of admiration. Therefore we can estimate that the majority of District 12’s inhabitants are younger than 60. Katniss describes the percentage of the people who live above the poverty line, or in the “Merchant Class” to be “very small”. Centives assumed that since district 12 is one of the poorer districts, and most of Panem is living in poverty, that only 10-15% live above the poverty line, with the rest of District 12 living in the Seam, the poverty stricken area of district 12.

While some of those living in the Seam have other professions like Katniss’s mother, or do not work, it is implied that the majority of those who of adults go and work in the mines. How many miners does Panem have? If we subtract the merchant class then there are 7,000 potential workers. Malawi, Rwanda, Mozambique, Brazil, Madagascar, Guinea and Niger have poverty rates today, according to the World Bank that are similar to those we estimate exist in District 12 of Panem. In those seven countries on average about 40% of the population is young according to the CIA World Factbook. So we can subtract another 2800 people from the number of miners. Assuming that a number of people don’t, or are unable to work, Centives concludes that about 4,000 people mine coal in District 12.

Using this we can estimate how much coal District 12 produces. In the United States today we have roughly 100,000 people producing 973MT (million tons) of coal a year. That comes out to .0092 MT/ Year of coal per worker. If we assume that the technology hasn’t changed much since our present time then 4000 District 12 workers could produce 37.12 MT/Coal a year.

What kind of population could you sustain with this much energy? The book suggests that the war was so devastating that it returned Panem to a pre-industrial age. People use less energy in such areas, and so a bigger population could be supported on fewer resources. Let’s return to those countries that the World Bank said had a similar poverty rate, and, let’s assume, a similar population to energy support ratio. Brazil is the most prominent example and it consumes about 13 MT of coal a year. But unlike in Panem, coal only makes up about 1% of their energy consumption. If coal was the only resources that Brazilians used to produce energy then they would have to produce 185MT of coal a year to support a population of 200 million. This comes out to about 0.93 MT of coal for every million inhabitants.

But the income inequality depicted in Panem seems to be at levels that are unimaginable in today’s era. It’s fair to assume that between the capital and the vast amounts of energy required to maintain the electrified fences only about 90% of the energy produced is used on the citizens of Panem that reside outside of the capital. This leaves about 3.7 MT of coal for the majority of Panem. If we assume that the Brazilian ratio of energy to population holds true in Panem as well, Centives estimates that Panem can support a population of 4 million within its 12 districts. The book gives us no reason to believe that there are any other sources of energy or international trade of any sort. Given these numbers we now see that Susan Collins was not exaggerating when she claimed the population of Panem to be significantly less than that of the United States today. The last time the United States had a population this small was in the late 1700s. With numbers like that, the odds of being reaped into the Hunger Games are certainly not in your favour.

District 12 is a relatively sparsely populated district due to bombings through two spouts of rebellion and the fact it is a mining district, relatively rural compared to the Capitol.

According to this link on Wikia:

But as we know Wikia isn't the most reliable of sources.

Anything else I can find is purely speculation, so no definitive answer unfortunately.

7
Where in the books does it say the first victor of District 12 was female?
8
Where does Panem's electricity come from?

55
Where were the locations of the districts in The Hunger Games?
25
Was Primrose exempt from future games?
15
Was technology the same when the Capitol began hosting the Hunger Games seven decades ago?
4
The Hunger Angst. Why the Arena tech yet the population is subjugated?
6
In the world of The Hunger Games, can people move to a different district?
12
Who are the office workers in Panem?
8
What did Katniss accomplish in the Capitol?
21
Why are there so few volunteers in the Hunger Games?
6
Why did Madge give Katniss the mockingjay pin?