Some sort of battle school (no, not Ender's Game), where teens are being trained as military commanders.

The control system for their army hinges around some sort of system that requires extremely fine motor control -- being able to "push" around digital representations of military units using a special interface that interprets minute finger movements.

The boy protagonist eventually meets a girl in the battle school, and is astonished to learn that most people do not live as well as he does -- for instance, he gets a fresh jumpsuit outfit every day and disposes of the old one; this is a luxury.

One scene I recall is them kissing for a moment in some sort of underground passageway; the boy protagonist notes the exact length of the kiss, as he has been trained to have heightened time perception.

I don't recall much about other commander characters; I think they have different special abilities, and one other major character might have physical deformities, possibly because of postwar-radiation-related birth defects.

They have been training for an upcoming, prearranged final battle between all the existing national governments; the military units are very possibly robotic or entirely digital in nature, so as to avoid wasting materiel / human life.

They ultimately win the battle, just barely; I think the girl protagonist gives them an edge in the competition by hacking the timing / control system in favor of their team, causing a discrepancy which only the boy protagonist notices due to his heightened perceptions.

It was agreed that the winning government gets dominion over one of the few islands of land left that was not irradiated in some previous war; the protagonists get to live there as a reward for their victory. I believe the boy protagonist later realizes he's gradually losing his ability to exactly quantify the passage of time.

The book is called Virtual War, by Gloria Skurzynski. It was published December 23, 2003. It is the first book in the Virtual War Chronologs series (followed by The Clones, The Revolt, and The Choice). 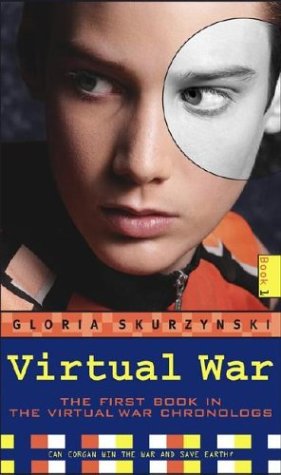 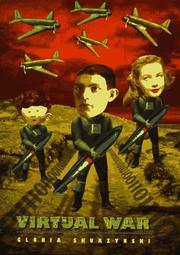 The official synopsis (as found on Amazon, Goodreads, Google Books, and the publisher's website, reads:

Imagine a life of virtual reality -- a childhood contained in a controlled environment, with no human contact or experiences outside of the world of computer-generated images.

Corgan has been genetically engineered by the Federation for quick reflexes, high intelligence, and physical superiority. Everything Corgan is, everything he has ever seen or done, was to prepare him for one moment: a bloodless, computer-controlled virtual war.

When Corgan meets his two fellow warriors, he begins to question the Federation. Now Corgan must decide where his loyalties lie, what he's willing to fight for, and exactly what he wants in return. His decisions will affect not only these three virtual warriors, but all the people left on earth.

The author's website has the following plot summary. (Spoilers if you haven't read the book.):

By the year 2080, plague, disease, and nuclear war have confined Earth's two million human survivors to a few domed cities, where they are governed by the Western Hemisphere Federation, the Eurasian Alliance, or the Pan Pacific Coalition. When it is discovered that a small group of islands in the Pacific has become livable again, the three federations decide to wage a bloodless virtual war, with the winner to take possession of the island called Nuku Hiva.

All his life Corgan, then fourteen, has trained to be the champion of the Western Federation. Genetically engineered for quick reflexes, superior physical condition, and a remarkable time-splitting ability, he's been raised in isolation inside a virtual reality Box.

Only three weeks before the start of the War, Corgan meets - virtually - his two teammates: Brig, a ten-year-old mutant who is a superb strategist, and Sharla, the same age as Corgan. It is Sharla, with her brilliant ability to break codes, who brings him his first real human contact. She also teaches him to mistrust the Supreme Council, whose orders he'd always obeyed.

Disillusioned, Corgan begins to lose his perfect sense of timing. After the Supreme Council promises that he can live on the Isles of Hiva if only he will win the Virtual War, Corgan's skills improve. During the grueling, gruesome, realistic enactment of the daylong War, Corgan's team barely manages to win, and Brig suffers real damage to his already weak body.

Corgan gets the reward he wanted: to live on the Isles of Hiva. Even better, Sharla joins him there for an idyllic six months.But just before she leaves to return to her laboratory in the domed city, Sharla hints that she may have cheated to win the Virtual War. It is now 2081...

9
Been trying to find this book for years...Furturistic, end of civilization, virtual thing
8
2000s (or earlier) young adult novel like "Ender's Game", genetically enhanced teenage boy trains in holographic battles to win an uncontaminated land
9
What is this story where children fight war games for land?
8
Sci-fi novel about child savants trained to play real-life war games
6
Novel about wars fought using small projections of armies
5
Post-apocalyptic novel with group of teenagers who would fight in virtual war simulations
5
SF Story - Boy/Man with acute senses and sense of time

8
looking for early 2000's sci fi youth fiction set in future, kids have mental powers that let them simulate war
15
Need help finding a specific Scifi trilogy, 2000-2004
6
Book series about a boy who has a scroll in a graveyard and accidentally summons a sort of dragon thing
5
Story involving children mind-controlled using food to take care of magical creatures after dark