Why did the Dursleys give Harry glasses?

Why does Harry wear glasses before he found out he was a wizard?

He lived with the Dursleys, a family of relatives that didn't care about him, to the point that Harry didn't get his own room, own toys, used his cousin's old clothing, was locked in a closet under the stairs and, later, locked inside a room that was used as a storage of discarded stuff.

The Dursleys didn't care about Harry's health (physical and mental) at all. They were forced to raise him. Why did they care about his vision?

This is my theory:

Teachers at Harry's Muggle school noticed he had bad vision, so they insisted that his uncle and aunt take him to a doctor. The Dursleys were the kind of people that are always worried about that other will think about them, so they took Harry to get his vision checked and buy him his glasses to keep up the appearances (they did this "keeping up appearances stuff" in the first book when they bought an ice cream for Harry).

As someone who was in school during the 1980s in the UK, I'm very pleased to confirm that free eye tests were an annual event. Teachers and parents/guardians were both made aware of potential difficulties and, because of the availability of NHS glasses (free from optometrists before 1985 and free to the bearer of a voucher after 1985) it would have been seen as borderline abusive for the child not to be provided with a pair of glasses if they had been diagnosed with long or short sight.

Harry's glasses seem very similar to the C-range of free glasses provided to children in the late 1970s and early 1980s, and which were undoubtedly the inspiration for the glasses described in the books.

You may wish to note that the company which made these frames also made the glasses seen in the films and that JKR was herself a recipient of NHS glasses in her younger years. 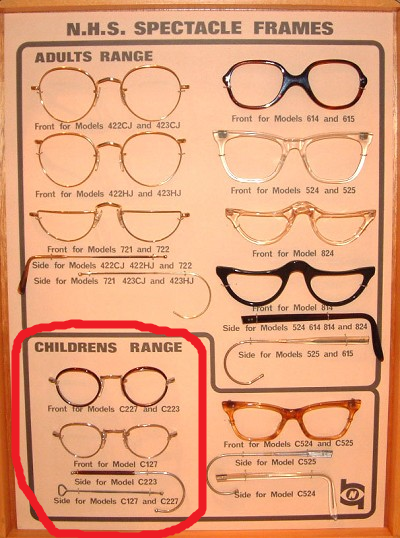 I personally believe that it's due to the chores. At some point, they noticed that Harry has problems with doing his chores (cooking, gardening...) that are consistent with very bad vision, and reluctantly gave him glasses (perhaps asked for them from some friends) so that he could do the chores better.

It is also possible that the glasses came with the original Harry package back in 1981; presumably James and Lily could have guessed that their son might have had bad vision (certainly Dumbledore would know enough to guess that). Perhaps, at some point on or before the 1st of November, 1981, glasses in normal two-year-old size (or even a bit larger, if they were intended for future use) were bought for young Harry; with how tiny Harry was by age eleven, the glasses could easily still be just barely fitting (it is mentioned that they are by then too small), and once in Hogwarts they could probably be adjusted magically.
Going on from that... perhaps Mrs. Figg got him the glasses (at some fairly early point, perhaps around 1983). It would certainly fit both the timing, and her. I'm surprised I didn't think of this idea earlier.

From my own experience... my memory tells me that I wore the same pair of glasses from 4 (or even a bit less) to 7-8 years old, and that a pair bought when I was about 5 was stolen when I was 14 (by which point it was a secondary spare, but still useful, and only secondary because it didn't fit my worsening vision well). Based on that, it would have been very possible that the glasses were bought before school (or even earlier); I suspect my fairly small size at young ages (in particular, my weight at age 11.5 was 27 kg) is a good approximation for young Harry.

Note that Harry had successfully learned to read, and indeed did not seem to have any problems reading while in school (which he would've needed to do much); otherwise he would've had trouble ever getting higher grades than Dudley, since so much of the school system depends on being able to read. This makes it likely that he got glasses before going to school; either by 1981, for chores, or perhaps in preparation to school (though, again, I guess it's possible that he'd already learned to read by 1981 anyway, and it's unclear exactly how much were the Dursleys non-caring for him while he was still a baby).

Firstly, I agree with your theory that Harry's teachers might have asked the Dursleys to take him to a quick eye check owing to his constant vision problems in class.

If not that, then I definitely do not see any incident/instance where the Dursleys might have observed or taken notice of his vision problem.

"Petunia, I see Harry's behaving oddly; rubbing his eyes a bit too often these days. Maybe we should take him to an eye check or something." said Vernon never.

In addition, as mentioned in the comments above, I am not completely sure whether regular free checks are a thing at schools in the 1980s in the UK. If yes, then maybe that should be a nice rival theory to yours.

Not the answer you're looking for? Browse other questions tagged harry-potter character-motivation or ask your own question.

54
Why does Harry Potter wear glasses?

18
What did the Howler to Aunt Petunia mean in Order of the Phoenix?
91
Why didn't the Dursleys gladly ship Harry off to Hogwarts?
11
How the Dursleys could be allowed to tell nothing to Harry?
21
Why didn't anyone care that Harry was treated terribly by Dursleys?
3
Would it have made any difference if Harry Potter didn't wear glasses?
5
Fanfiction Harry kills the Dursleys
21
How could Harry have opened Hedwig's cage if he didn't have his wand?