What was Helga Hufflepuff’s animal ‘avatar’?

The four founders of Hogwarts all have alliterative names that give hints as to their personalities (first name) and the values their respective houses seek (surname, through the cultural symbolism associated with various animals, at least in Western Europe):

Whereas the other three Hogwarts founders have surnames that quite directly reference an animal that is notionally related to both the person and their house (if not actually its mascot), Hufflepuff doesn’t really seem to reference any animal at all—certainly not the house mascot, which is the badger. The Wiki just says that it “could mean ‘huff’ and ‘puff’”, which would at best connect it to the Big Bad Wolf… somehow not likely, I think.

The only thing I can think of that might fit is Puffskeins (or perhaps Pygmy Puffs). They’re at least docile and kindly, and not exactly known for their overflowing intelligence. But then what about ‘huffle’? And what about the fact that what ol’ Helga herself appreciated most seems to have been hard work, dedication, and loyalty?

Has any canon source (the books, Pottermore, Rowling interviews) ever specified what, if any, animal and animal symbolism the name Hufflepuff is supposed to reference?

1 The Wiki claims that “Rowling stated that the name "Salazar Slytherin" was chosen after the Portuguese dictator's name”, but does not mention where she has stated this. Considering that Rowling was living in Portugal when the wrote the first bits, though, it doesn’t seem an unreasonable assumption.

2 Why Rowling chose an eagle, rather than a raven, to be the symbol of Ravenclaw house, I cannot fathom—especially since the eagle is symbolically more closely linked to Gryffindor. But that’s a different question.

# Yes, I know I’m misusing the term ‘avatar’ in the title; anyone can think of a better word, please do let me know, ’cause I couldn’t.

The name Hufflepuff is generally believed to be derived (out of universe) from the idiom "Huff and Puff". (Although I cannot find any official confirmation from Rowling about this.)

Regarding what Hufflepuff's avatar might be, it's worth noting that Rowling originally planned to make Hufflepuff's mascot a bear, before she decide on a badger. This can seen in the annotated Philospher's Stone. 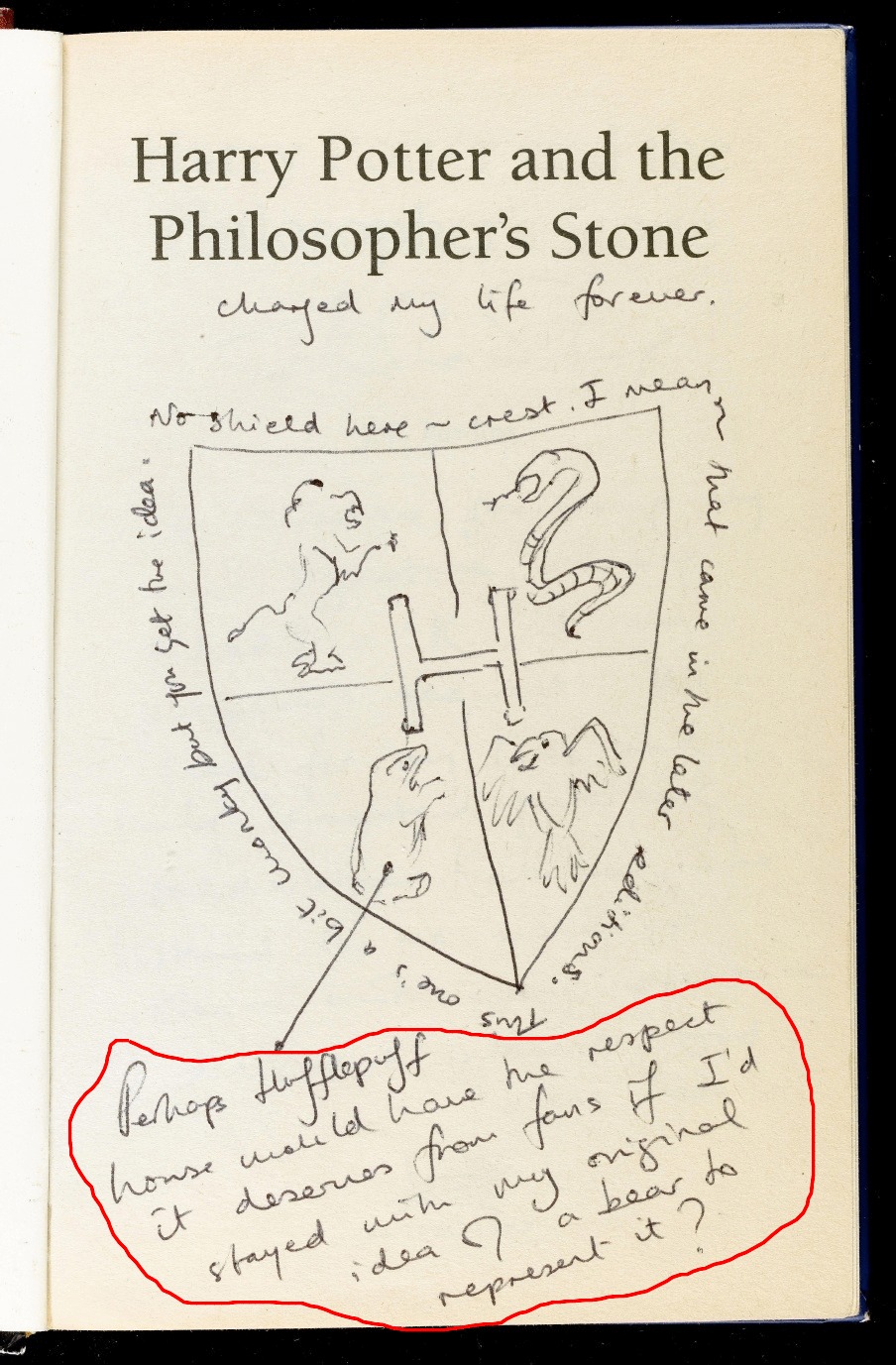 Transcription:
Perhaps Hufflepuff house would have the respect it deserves from the fans if I'd stayed with my original idea of a bear to represent it?'source

29
When is a raven like an eagle? When it's on the Ravenclaw house crest
20
What is the association of the 4 house animals to the Hogwarts houses and who picked them?

18
When was Hogwarts founded?
20
Why is Hufflepuff House called Hufflepuff?
21
Where were Hufflepuff, Ravenclaw & Slytherin from?
3
Did J.K. Rowling purposefully name the school founders off of Hogwarts?
48
Why does Hogwarts have dungeons?
4
Why would the Founders of Hogwarts have needed to hide from Muggles?
23
Are the Hogwarts founders dead?
3
Has Slytherin or Gryffindor's portraits ever spoken on the events happening at Hogwarts?
4
How did Salazar Slytherin build the Chamber of Secrets without the other founders knowing?